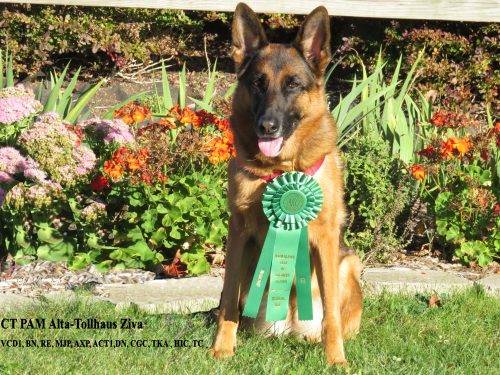 Champion Tracker (CT). This title is awarded to dogs who have passed all three tracking tests.

According to the AKC, the VST test has an 11.44 % Pass Rate and 9.4% of dogs that attempt all 3 tests succeed to become Champion Trackers.

A brief description of the 3 test elements is listed below.

Tracking Dog (TD). The track is 440 to 500 yards long with 3 to 5 turns and has been “aged” for 30 minutes to two hours. The dog must “indicate” the article found. Tracks are laid in open fields with uniform cover and do not include changing terrain, roads, ditches, etc.  Before a dog can enter this beginning level test they must be certified as capable of handling a basic track by a judge.

Tracking Dog Excellent (TDX). The dog must have a TD or TDU to enter.  The track is 800 to 1,000 yards long with 5 to 7 turns and has been aged for 3 to 5 hours. There are two sets of “cross tracks” that are diversionary only and should not be followed by the dog. The terrain is more difficult, and the dog must indicate his find of four dissimilar articles along the track.

Variable Surface Tracking (VST). The dog must have a TD or TDU to enter.  The track is 600 to 800 yards long with 4-8 turns and has been aged for 3 to 5 hours. There are 4 articles placed along the track & must include one each of leather, cloth, plastic, and metal. The dog and handler must follow the track without knowing where it goes and find all of the articles along the way.  The terrain must be comprised of a minimum of three different surfaces, two of them non-vegetative (such as asphalt or concrete), where the dog is required to navigate a turn. This is a very difficult test of a dog’s ability to track in an busy urban environment.

We started our 10 hour drive to Illinois Friday at noon.  I wanted to get her there by noon the day before the test on Sunday so she would have time to acclimate to the different types of vegetation in that area she would be tracking on.  We needed time for some fun motivational tracks before the test.  This was our second attempt to pass this test.  2 weeks before we were entered in a test & the judges were sure she would pass, but with the unseasonably hot 86 degree weather she tuckered out ¾ of the way through.

Ziva really loves the hotel life we live when travelling! 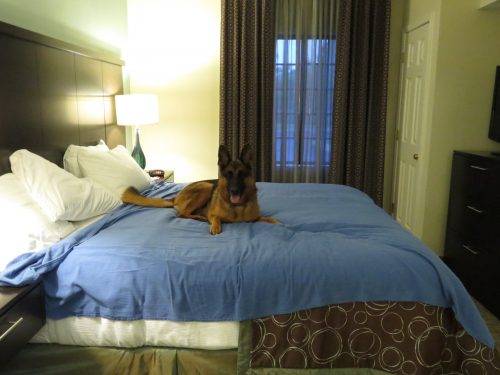 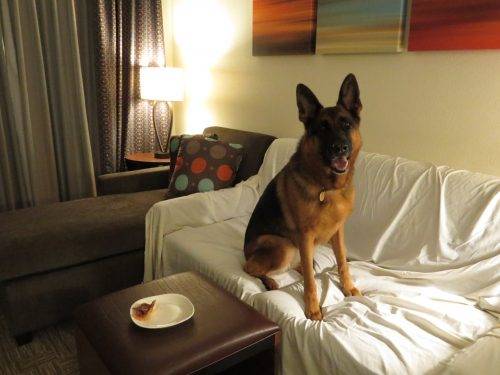 The day of the test was perfect, cool and slightly overcast.  Ziva and I arrived at the college test area for the draw for tracks at 9 am.   I got out of the car and looked at the busy campus grounds and thought this will be an expensive practice track, but a good experience for us.   I was the 2nd person to draw and my track ended up being #3. The club had these pretty little jars filled with homemade dog cookies to choose and our track # was under the lid. 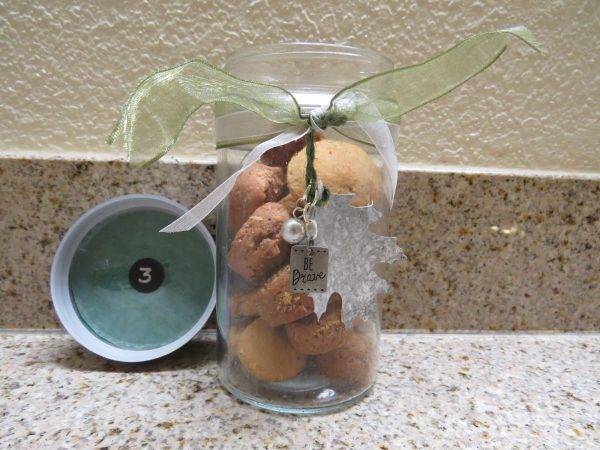 When it was our time, we drove to our track.  As I got Ziva’s harness out of the car, she was whining and eager to go.  My heart was pounding and hands shaking as I adjusted it.  The judges were super nice,  asking if I had water, and an extra line-something a nervous competitor may forget but are essentials to a successful track.  We walked toward a set of buildings; saw a hot pink start flag & one of the judges said there is your start.  Ziva saw the flag and knew what was coming and she enthusiastically pulled toward it.  About 30 feet from the flag I unhooked the line from her collar and to her harness which is the cue to start.  The start article was a knotted sock; she took, for her, a rather long sniff of it.  Our start was on grass and she carefully checked the area all around the flag and when she was sure which way the track went, she was off so fast, I had to be quick to grab the sock on the way by.  This campus had large drainage covers EVERYWHERE and she had to go investigate them ALL-it was very nerve-wracking for me, but after a brief investigation of each one she came right back to “her” track.

There is a huge amount of work that goes into tracking.  To quote ” You can cheer lead in obedience & agility or protection work is somewhat self-reinforcing….but tracking? At some point, the dog has to step up…..and that shows drive, work ethic, and the relationship between dog and handler.”

Ziva working the track next to a building. 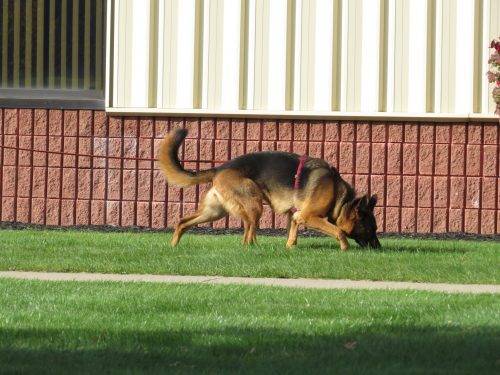 The judges and our track layer Sally. Letting Ziva know how proud I am of her.  After all of the tracks run,  we were the only pass of the day & the only pass for that club’s test in the last 5 years!  This was also very special for me because it was on what would have been my Mom’s 95th birthday & I feel like she was helping to guide just like she did my whole life.  When we were presented with our ribbon and track copies both judges spoke about her wonderful work ethic and her awesome methodical and thorough tracking style.  They also said as judges what a joy it was to watch us work as a team, seeing the fantastic bond between us and how she consistently stepped up to the challenges we faced together in the track. 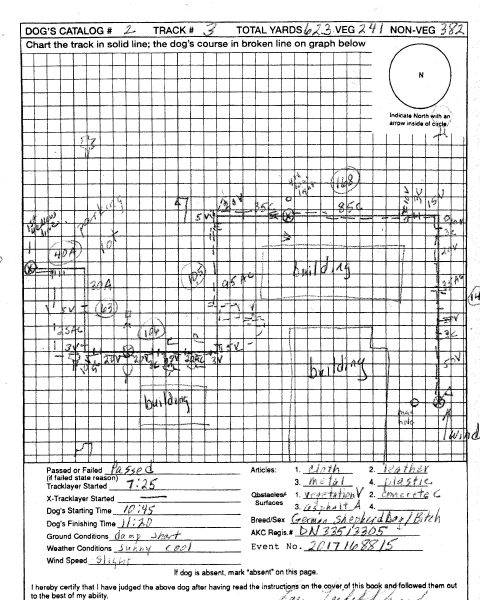 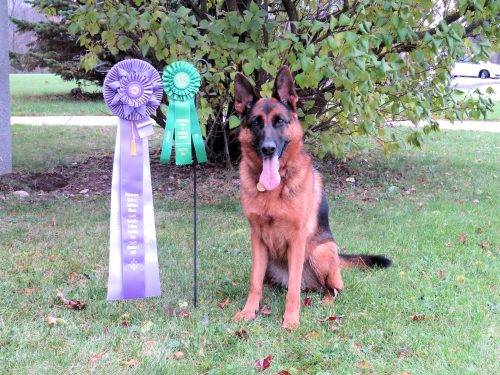 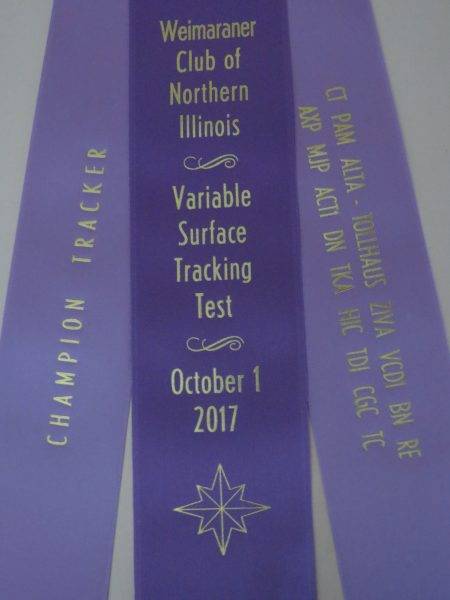 Lisa, I think you know that I could not be happier for you, or more proud of you, for this accomplishment. It’s one thing to train in a sport and get the initial title……it’s another thing entirely to take it all the way to the very top. This took years of dedication and so much patience on your part! I truly believe that scent work tells us SO much about our dogs, their work ethic, etc.

What an accomplishment, my friend!

Oh my goodness!! Congratulations! what a huge accomplishment – what you have accomplished with her is just outstanding. And the only team in 5 years to pass!?!?!?!

No kidding!.I had no idea about the pass rates until after. Ignorance was bliss in this case since I may not have been able to overcome the mental challenge of the statistics. She is such a joy to do everything with, well except she is a bed hog in the hotel-LOL. She tries her heart no matter what we attempt. She has definitely set the bar very high.