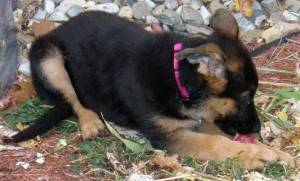 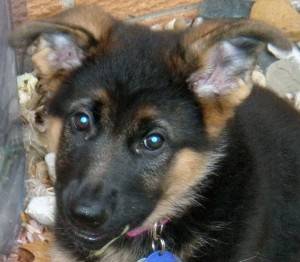 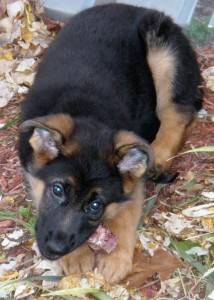 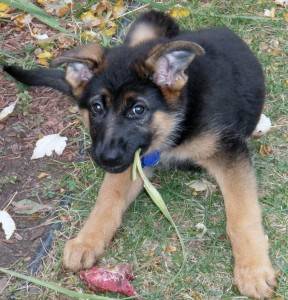 I finally took decent pictures of LT. She hardly stops moving! We are have a great time getting to know each other.

She is19.8 pounds today and almost 11 weeks old. She eats a combination of kibble and raw. Usually it’s venison mid-day. The last couple days she has been eating duck for lunch.

Her right ear still flops over a bit, while her left ear stays up more or less. Brown/red is creeping into her face. These pictures are a couple days old and don’t really show what her ears are doing now.

My wife is complaining that she only listens to me. Jane says that she acts better when I’m around. LT does so many obedience commands – it’s hard to believe how quickly she picks things up. She kennels, walks on a leash, sits, waits for the release command for her food, plays fetch. House breaking would be better if I could learn her queues – I would say every accident has been my fault for not paying close enough attention. When we get outside she takes care of business very promptly and waits for the reward.

When we are outside she uses her nose a lot. I don’t know how to train her to track, but I’d like to. I’m researching trainers now – it’s as much work as finding a breeder. We did have one private lesson and that put me on track. But, I don’t think that trainer is the one for LT and I.

She isn’t intimidated by anything. Waves breaking at the beach, gun shots at the range, a zillion children dressed in costumes!  She goes with me most everywhere, except my main job. At our gun shop she lays on the floor waiting for customers to come in and pet her, she acts like this has been going on for years.

What a cutie Dave! And so funny – Nuke “works” at a gun shop too! He goes to work with my husband every day. Gives him lots of opportunities to meet new people!

A litter mate puppy is owned by a couple that designs shooting/sniper related “stuff” and that is the best I can describe it.

I am glad the baby is getting raw, a combo like you are doing is probably a good way to go. Karen M. will voice her opinion if she disagrees. I hope Mos has good luck hunting this year we are all out of venison…I have given it away.

At this age, ears can change throughout the day.

LT is a feisty little girl and she reminds in looks and personality of Garbo (XBox – Faye) and less so of Allie.

You are right about trainers.

Thank you for the update!

If she is like Garbo, I can’t wait for the water photos!

Listen well to Julie on the tracking. Do schutzhund style.

If she is anything like Garbo, you are in for a real treat!

Hi Dave,
Look at that beautiful baby chowing on the raw meat! Whoo-HOOOO! It’s the BEST thing you could possibly do for her!! If you go to one of the doggie boutiques they have raw bones in the freezer, or sometimes, even the grocery store has them, but cut off as much fat as you can. Get her long hanks or knuckle bones and just watch her SMILE!!! Start out by giving it to her for about an hour at a time and stick it back in the freezer in-between. You’ll be able to tell how long she can have it at by her stool consistency. Really great for those little needle teeth! They are big enough that there’s nothing to worry about! Congrats to you and your wife!
Regards, Karen M.

Taking away after an hour and re-freezing…. simple but brilliant! Thank you for that excellent tip.

I spoke with Gustavo today and we are going to meet and evaluate LT on Sunday evening.

I haven’t given LT anything big enough to take an hour yet! She sure jumps up and down when I reach into the freezer. She sits very pretty while earning that mid-day meal.

She was waiting for me at the door when I got home from work today. She is amazing at what she picks up each day.

Super! See you at the big guy’s place Sunday evening.

I got to see LT last night at training. She is very cute, very alert, doesn’t miss a thing. A natural retriever—– she retrieved Dave’s hat to him while doing a recall…wish we had it on video. It was so cute and amazing at the same time, everyone was laughing. Gustavo was very impressed with her. I think you are going to have some fun with this one Dave.