Nuke has been busy this week, going for his last vet appointment (for a year, at least) and romping around Montana. He’s just over 15 weeks and weighs a whopping 36 pounds! I cannot believe how fast he’s growing. Check out his 15-week mug shot….

…versus his 8 week mug shot:

We have had lots of outdoor adventures this week. 🙂 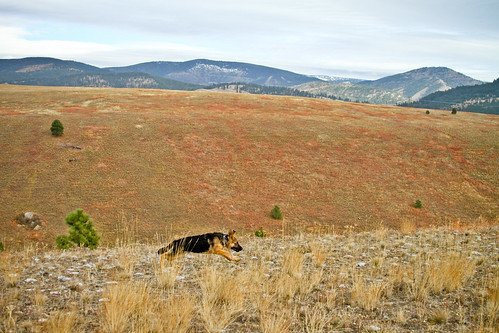 Tonight he has his second puppy obedience class. I am SO HAPPY we are going to those – his behavior has improved tremendously in just one week already! And I lucked into the local schutzund “club” that I previously did not know to exist – probably because it’s only three people. But three is better than none! So we’ll see if we get anywhere with that.

Wow is right. Huge changes in face, coat and size.

I loved the comparison shots…I see more pictures of Nuke then other people see…and those ears just sprouted this last week. That is cool about the schutzhund club…3 people who cares…and as word gets out more will join.

I could make all the photos open to the public but some are just mediocre, and I TRY to cull them a little. :p I am hoping this little club works out, it would be a great opportunity to learn!

Oh my goodness – Nuke doesn’t even look like the same dog. He has gone from adorably cute, to unbelievably handsome in a matter of weeks!