Blind Dog Has her Own Seeing Eye Dog 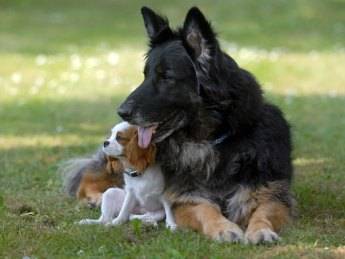 These two dogs are more than just best friends, they share a rare bond.

Ellie, a young cavalier King Charles spaniel in England, is almost completely blind. While her owner and a local animal organization are working to raise money for a vision-restoring operation, a German shepherd named Leo has taken matters into his own paws, and is protecting and guiding her.

“Ellie has cataracts on both eyes and is only aware of shadows,” explains Jean Spencer, manager of Rochdale’s Royal Society for the Prevention of Cruelty to Animals, in an interview with the Manchester Evening News. “But Leo, who’s an absolutely massive dog, has become her eyes. It’s touching to watch them together. She follows him around and snuggles up to him.”

Ellie was part of a litter of five puppies rescued from harsh conditions by the RSPCA, says Julie Lander, an RSPCA volunteer and Leo and Ellie’s owner. “As well as having cataracts, Ellie’s eye muscles haven’t developed as they should have as she’d been kept in the dark. The puppies had no light or heating. I felt so sorry for her when she arrived, and knew she’d need a special home. But I also knew she would be all right with Leo, as he just loves little dogs and they took to one another straight away,” Lander tells the Manchester Evening News.

Lander goes on to explain how Leo’s almost 90 pounds of bulk helps keep his new charge safe. “I take them for walks in the park and Leo guides Ellie around. He is so protective and herds the more boisterous dogs away from her,” Julie says.

No one has commented on whether Leo can actually tell that Ellie is disabled or if he is caring for her based solely on her size. If Ellie’s problem is ever fixed, it will be interesting to see whether she will continue to share the same bond with Leo.

Although they already have had at least one fundraiser, the RSPCA does not yet have enough money to pay for Ellie’s operation. If you would like to donate, go to www.rspca-rochdale.org.uk.

This was great story. Thank you for sharing!