Yesterday Aiden earned his IPO 1 Title at the Southern New Hampshire Working Dog Club Trial in Milford, NH. Our goal was to try for IPO1 in early June but our trainer entered his dog in the SNHWDC Trial and encouraged us to do the same. He said Aiden was ready. We also felt Aiden was ready but I was not sure about me!!

All week long we were getting stressed watching the weather reports as the forecast for Saturday was for heavy rain. We drove up to NH on Thursday after work. Friday was a beautiful day. The morning was cool and sunny and we headed out to do a practice track at a nearby field. We then went to the trial field where we had been given permission to practice. Aiden did well in obedience and protection practice. Mario’s wife and two children were with him. The kids loved Dylan and Aiden. 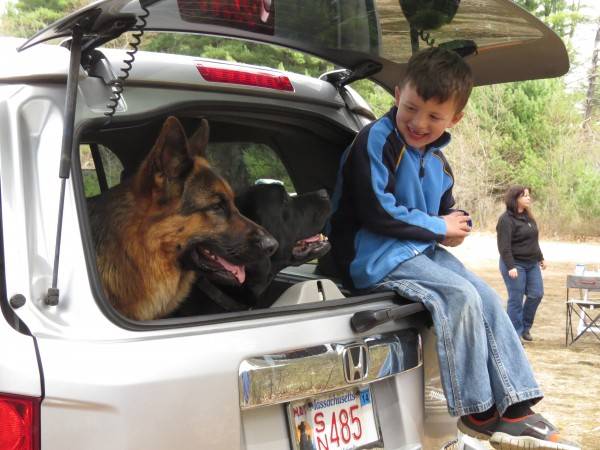 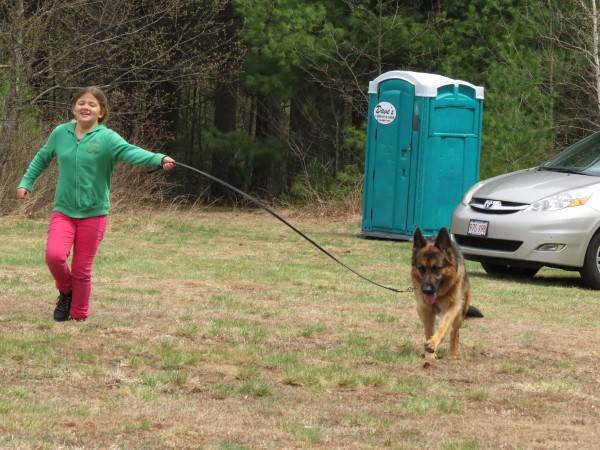 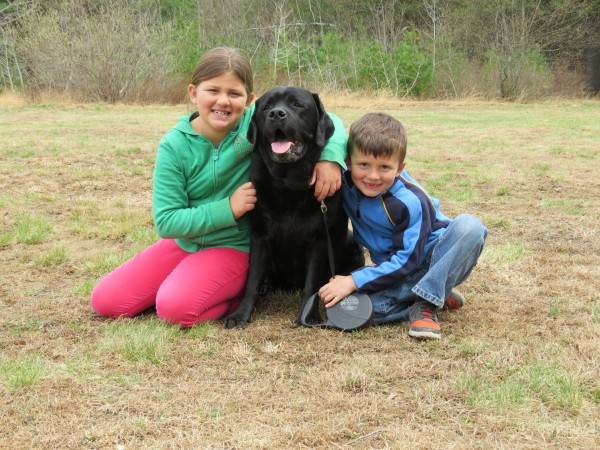 Several people from the Inner City Working Dog Club (where we train sometimes) drove up on Friday and we all went out to dinner.

When we got up at 4:45am on Saturday it was cool and overcast. All the competitors met with the judge at 6:30am and we convoyed to the tracking fields which were on private property at the top of a very large hill with beautiful views. As we were on our way it started to rain. 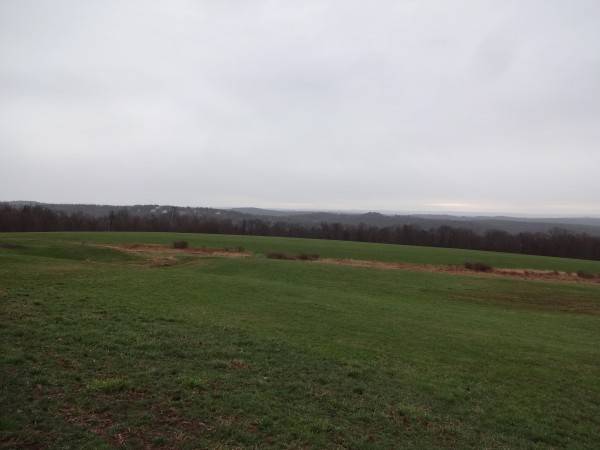 Aiden having his microchip and tattoo confirmed by the judge 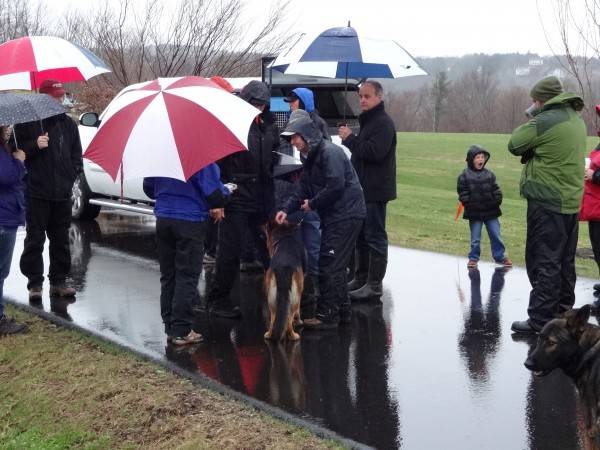 They held the draw for the order of tracks and as luck would have it I, unfortunately, drew number 1. This being my first IPO trial I was nervous to go first as I did not know exactly what was expected. The judge took the six of the IPO 1 handlers down to the field and explained the way he wanted the tracks put out, how he expected us to walk and where to drop the articles. After the required wait time, Aiden and I checked in with the judge and began our track. It was now raining quite heavily. Aiden started the track beautifully and the first leg and turn were good. He found the article and downed to indicate it. He restarted well on command and continued down the track. At the second turn Aiden got confused and started to circle around a little. Eventually he found the track and continued in the right direction. He was still distracted and looked up and then decided to eat a piece of grass but again continued on. He found the second article and indicated it. We checked out with the judge and received a score of 82. Phase A done.

The tracking video is here in its entirety, however, as Aiden and I are on the first leg and we  disappear from view down a dip in the field and Jack just followed the judges head until we reappear on the third leg.

After tracking was over we all met back at the club field. The BH dogs were first at 10:30am. After the obedience portion of the BH Aiden and I were in the first pair for IPO 1 Obedience. We were sent for our long down first. During our obedience routine it was still raining! Aiden scored at 87. Phase B done. Two down one to go!

These pictures courtesy of Alissa Weaver of the Inner City Working Dog Club. 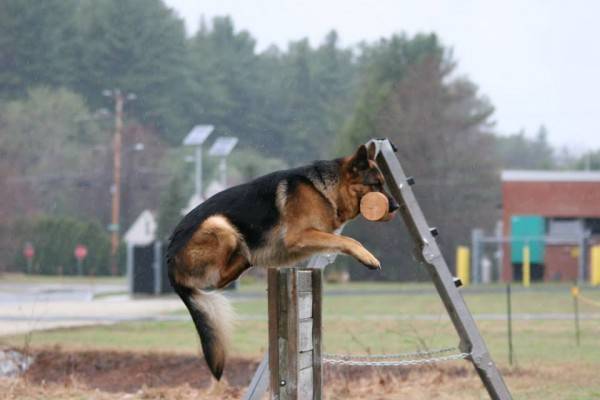 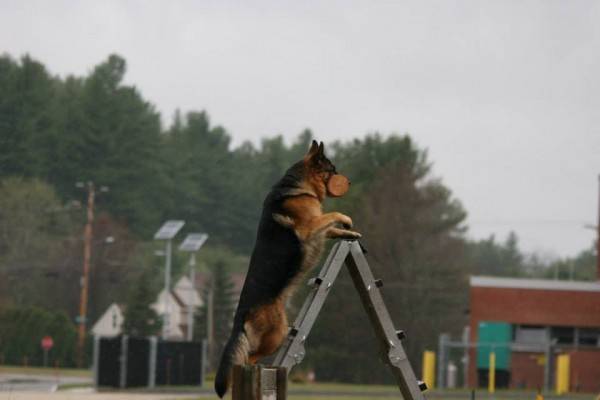 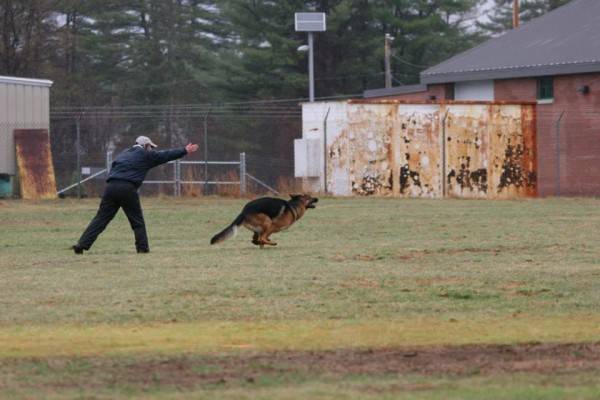 The last phase – IPO1 Protection. This is Aiden’s favorite phase, as with most dogs! The rain had finally eased up but by this time it did not matter as everything was soaked. On the long bite, which is normally Aiden strongest part, he slipped off the sleeve. Something that has never happened before. As I approached to pick him up Aiden lost his mind and ran behind the helper and back into the guard position! Once I got him settled and back into heel position we did the transport to the judge and checked out. Aiden scored a 79 Pronounced. Phase C done……IPO1 earned! 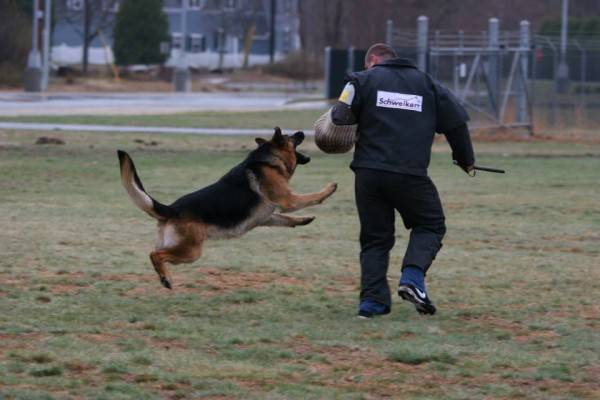 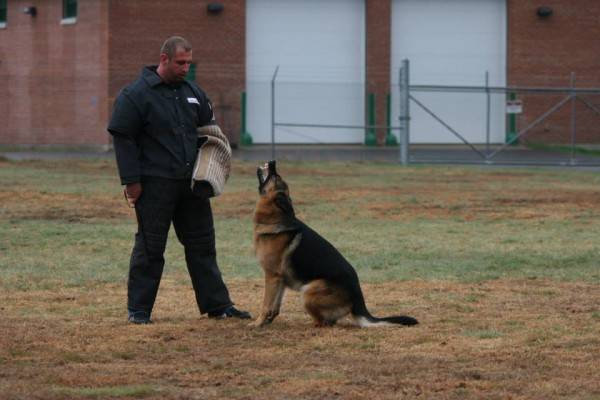 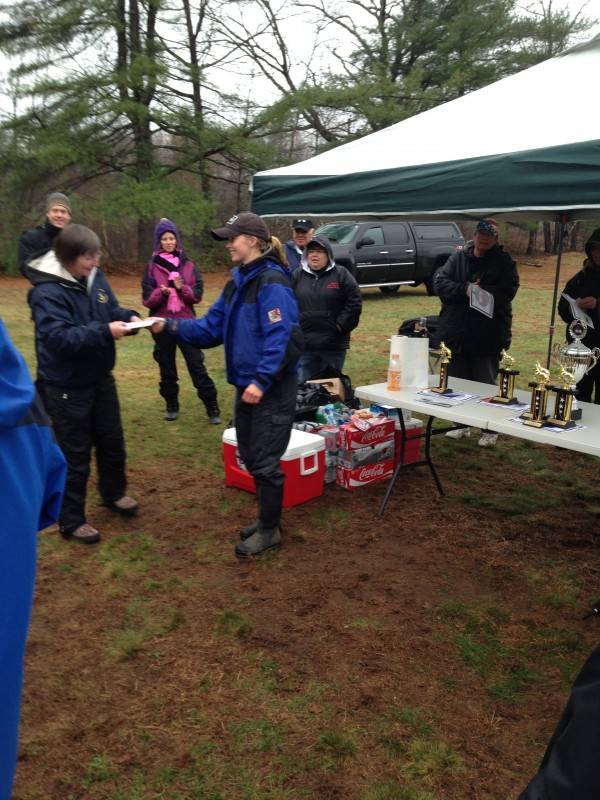 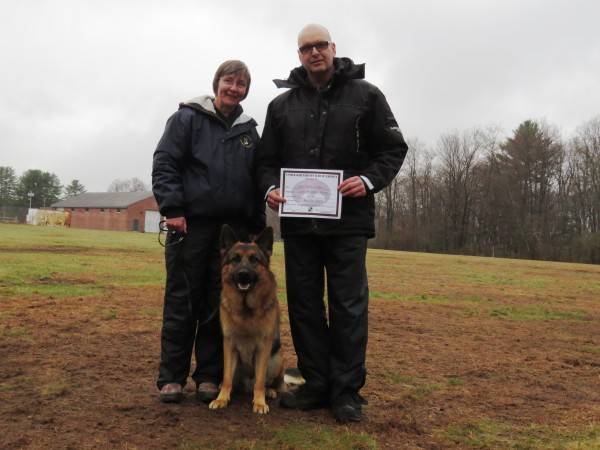 We are very pleased with Aiden who tried so hard to do everything asked of him from a very inexperienced handler. He is my first IPO dog and we have both learned a lot. In private conversations with the judge, the helper and other experienced handlers, the general opinion was that Aiden is a good dog with great potential.

Two very relieved and happy people at the judge’s dinner. Ofcourse the boys got to share their own steak! 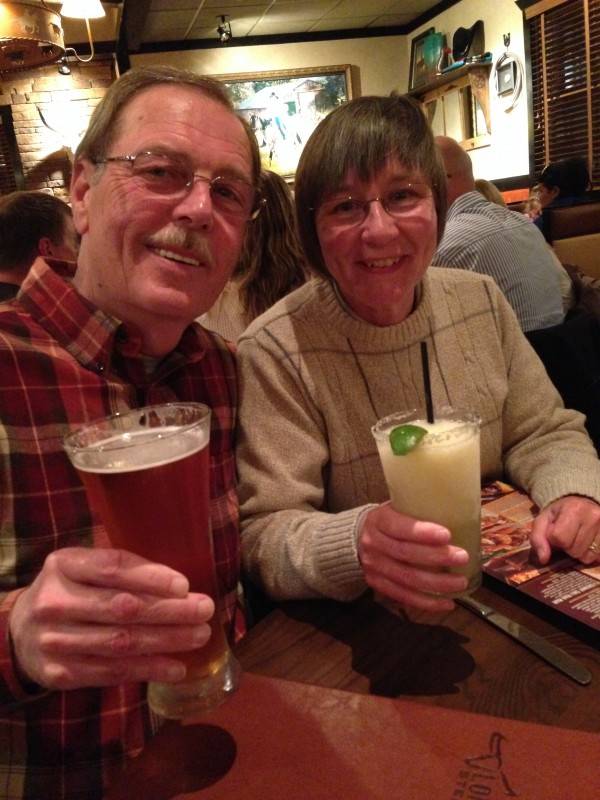 Congratulations! That is so exciting and I felt that I was there with all of the commentary. Thanks for the explanation of the day. Good job Lynda and Aiden!

Thanks Jennifer. Despite the rain it was fun!

VERY VERY VERY Nice Lynda! With a 2 year old dog you just went out and did the equivalent to a UD title. No one has any idea how hard it is to schH/IPO until they go out and actually do a trial. It is a triathlon. It is nerve-wracking. It is simply difficult.

I know you were nervous (had to be!), but you look cool and calm. The sit-out-of-motion, the veraus, the retrieve, all beautiful. Tracking looked very good too. The only serious bobble was that darn slip from the sleeve. I could not see what happened from the video.

Thank you Julie.
I was nervous but it was a great experience. I have enjoyed learning this new sport and it is great having a dog who loves to learn and work with me.

Lynda, I finally was able to sit and watch the videos. How beautiful. What a great accomplishment. Thanks for the video and the commentary, felt like we were right there with you. Had I been; a big hug to both you and Aiden, and of course your cinematographer, Jack.
Wonderful job. Patti

This is great! Love the commentary, it is almost as good as being there. I don’t know how you can remember where you are going or what you are doing w/the heeling. Do you have to lay each others tracks? How long do they age? I was always told to hope for rain since water holds the scent. You can tell he really likes the protection work. Congratulations!

Hi Lisa,
There sure is a lot to learn! I was okay with the heeling pattern but had to try to remember to do the “out of motion” exercises before going to the dumbbells!
Unlike AKC, in IPO 1 you lay your own track. The judge tells you the type of track to lay. As this was my first experience I don’t know if all judges do this, but this judge had me walk until he blew a whistle. At the sound of the whistle I had to make a right turn. At the next whistle I had to drop the first article while continuing to walk. The third whistle was for another turn and the last whistle was for me to drop the last article. It was quite interesting. Has anyone who has done SchH or IPO had a judge do the tracks this way?
In IPO2 the track is longer and put out by someone else and you do not watch where the track goes. In IPO1 the track is ages 20 minutes and in IPO2 it is 30 minutes.
I was told that damp grass is good for tracking but that it is not good in the pouring rain.
Aiden LOVES protection!

Congratulations Aiden, Lynda and Jack!!! What a wonderful accomplishment! Every time I look at the video, I just keep thinking wow, he just turned two and you have never titled in IPO before. Love the pictures on and off the field, and especially the commentary … next best thing to being there:) Great, great job!

Wow that is so fantastic. And being a first timer that is super!!! I too have started my first IPO dog he turns 1 this wknd and while he is doing well at this point I can’t imagine how it will all come together so seeing how well you have done with Aiden (I have followed him since you lost your boy and got Aiden as a puppy) How much you have done is amazing. Congrats you must be so proud!