This weekend Aiden was entered in a United Kennel Club (UKC) conformation show in Westfield, MA. We have never been to a UKC show and decided to give it a try. Unfortunately there were no performance events at this show. Westfield is quite a drive from Cape Cod so we decided to drive out on Friday and make a long weekend out of the trip. 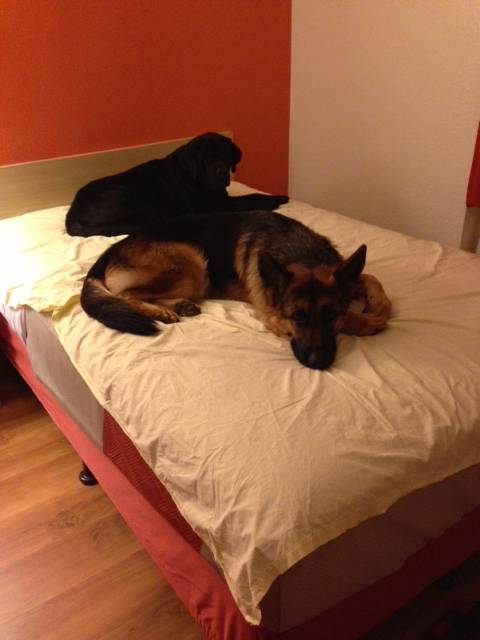 Over the weekend there were 4 shows, 2 on Saturday and 2 today.

In the first show on Saturday Aiden was the only German Shepherd Dog. The judge did a thorough exam and as Aiden met the standard he won the class (youth dog) and was Best of Breed!! That gave him 25 points towards his UKC Championship. He moved on to the Herding Group but unfortunately did not place in the top 4. 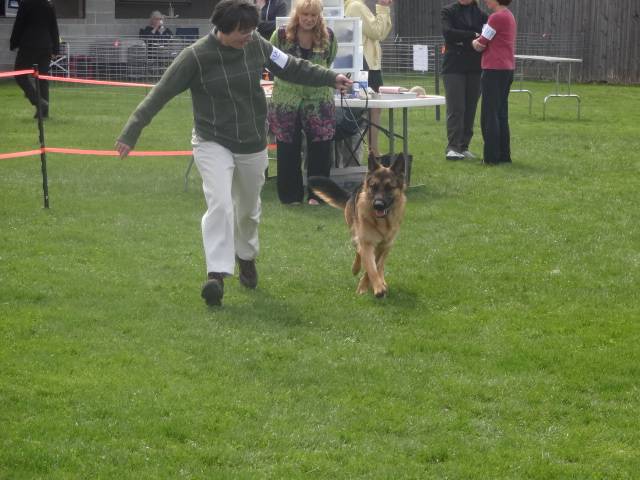 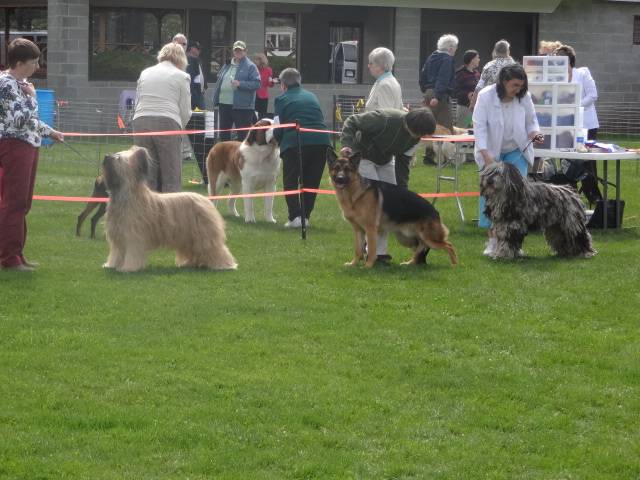 In the afternoon show once again he was the only GSD and earned another 25 points. In the Herding Group he placed 4th out of 8 dogs and this gave him a “win with competition” as he placed higher than the other 4 dogs in the group. We were thrilled. In order to earn a UKC Champion Title you need to earn a minimum of 100 points, earn points under 3 different judges and win 3 Best male/female or higher classes with competition. 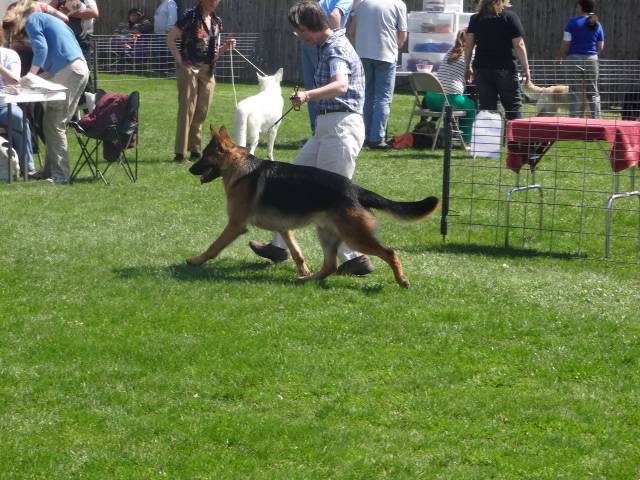 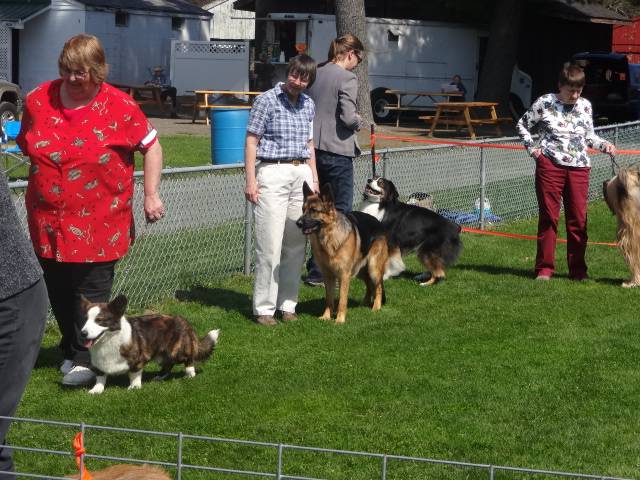 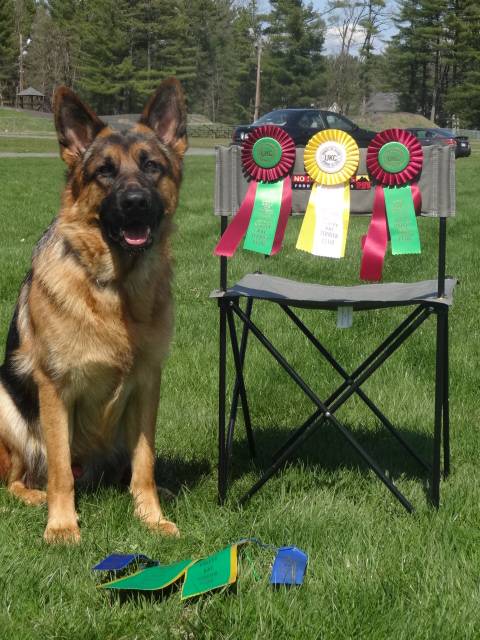 In between the shows on Saturday we walked over to a section of the fairgrounds where a BMX competition was being held. It was a great opportunity for Aiden to experience all the kids, bicycles, noise and chaos as this will help with his training for the traffic portion of the BH. 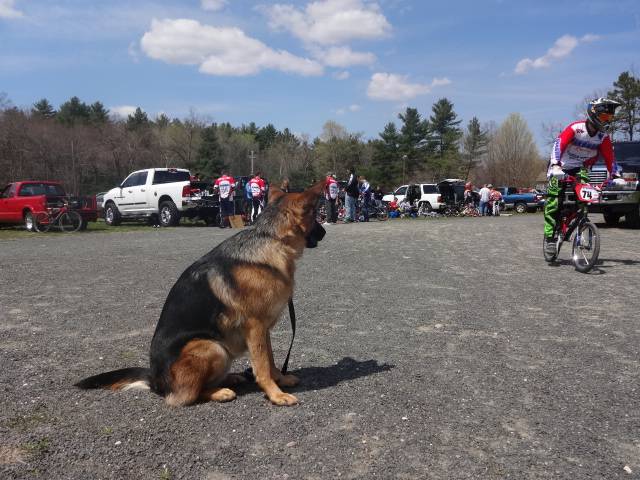 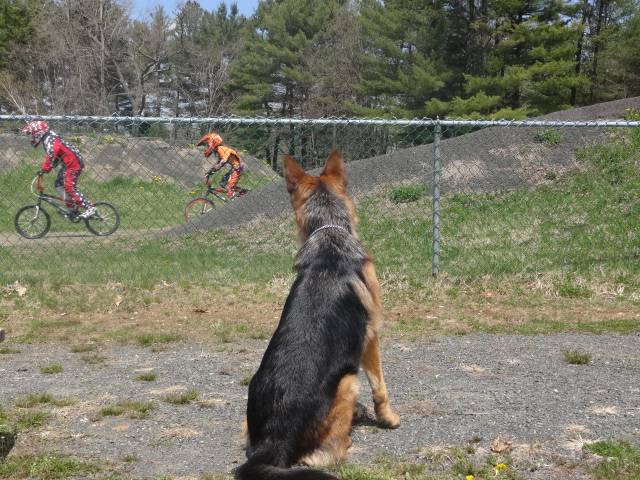 Today in the morning show Aiden was the only male GSD entered and that gave him another 25 points for Best Male. There was a female (5 yr old) AKC/UKC Champion entered and she beat Aiden in Best of Breed so Aiden did not earn a “win with competition” and did not move on to the Herding Group. In the afternoon show the exact same thing happened. 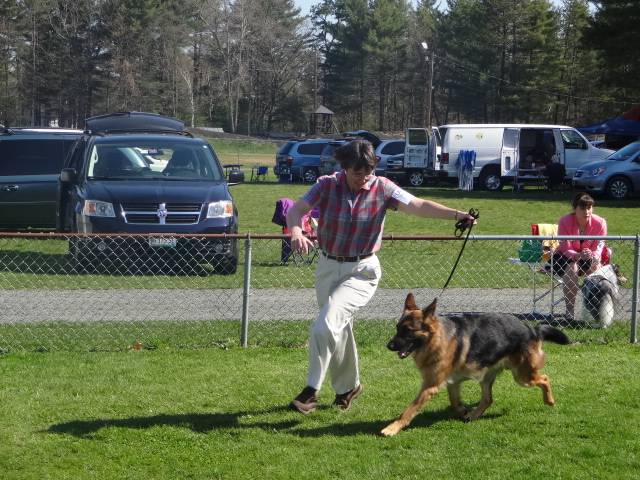 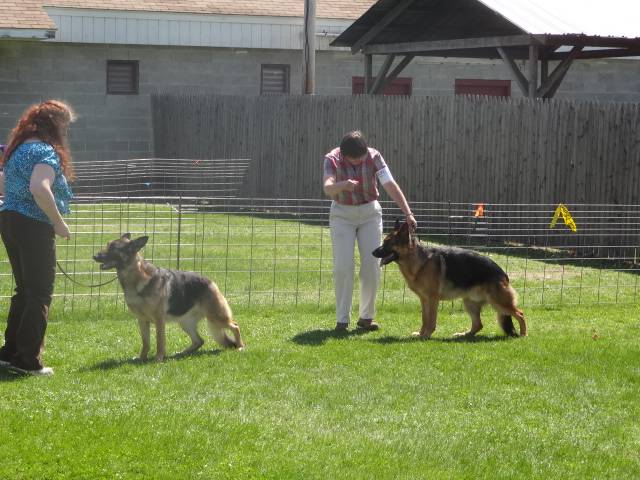 During the Best of Breed portion the female GSD was in front of Aiden and sometimes a young boy just acts like a young boy! 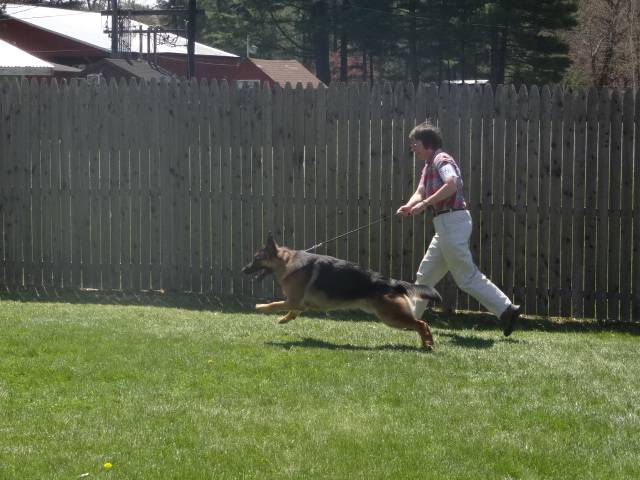 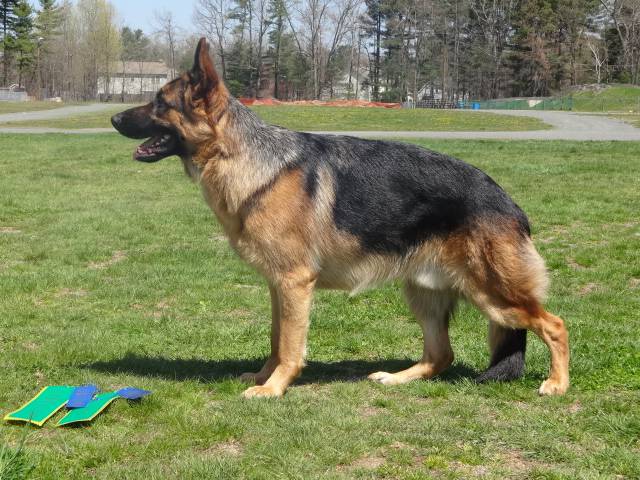 Over the weekend Aiden earned the 100 points necessary to become a UKC Champion, under four different judges but still needs 2 wins with competition. Hopefully at the next show we go to there will more GSDs entered giving Aiden the opportunity to compete with competition.

All 4 judges took the time to tell us how impressed they were with Aiden’s temperament (it helped that he tried to kiss them all!), his rich coloring and overall structure.

It was a wonderful weekend, the weather was great, the people were friendly and most of all Aiden and Dylan had a super time. Our first experience with the UKC was very positive. 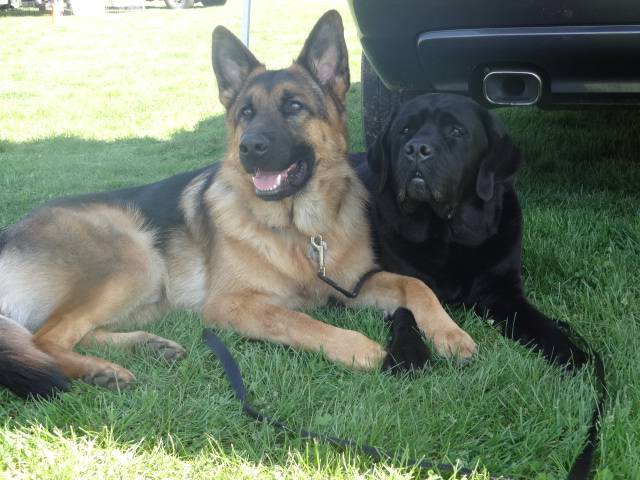 Lynda, Lynda, Lynda. What is wrong with you. All you need to do is put rollers in Dylan’s ears to make him a black GSD and enter him in Aiden’s classes. Then you’ll have competition. It works sort of like Julie putting cheese in her hair.

Congratulations!!! Placing in Group is totally awesome! Wonderful photos. Looks like you did a super job. Next time he acts like a “bad boy” in the ring, lower your hand and if necessary lean back a little. Come on over and I’ll show you what I mean. 😉

I don’t understand how Aiden could have placed second that other GSD, but to each his (or her) own! I suppose he is a puppy and not yet full grown, but still, he is one of the most handsome pups around.

Jennie took the words from my mouth. Aiden is clearly the better dog. This is my frustration with UKC. Just because a person has success in one bred they apply for their judges license and they automatically are put in the ring to judge all breeds (with less then a handful of exceptions). Most of the time, I feel, they do not rely on good old dog sense, but rather judge on who is on the other end of the leash. Have they seen this person a lot, then they most know what they are doing. Or they judge based on what they think they should put up, again not asking themselves what is “sound” in any breed. Does this dog in front of them have the “type” of the breed they are judging, does it exemplify what a GSD should look like? Rather they judge based on what they think the type is suppose to be based on what “experts” have told them. Experts being 5 minute amateurs that know it all.

I’m with Jennie. Okay, admittedly, I am just a lover of GSDs (and Goldens), and I have never been to a show, but when I think of what a GSD should look like…. Aiden is clearly it. Maybe the photo showed the ‘winner’ at an awkward moment? Otherwise, I am very confused.

Totally agree on that one.

When you show UKC you have to remember you are not being judged by an expert in your bred. UKC is just for fun and experience. When you keep this in mind you can enjoy yourself. Unlike myself, I allow myself to get frustrated by the poor judging. What really frustrates me is when they put dogs that will not allow the judge to touch them, they are tucking their tails, shaking, etc. etc. then my blood pressure really rises.

What I do like about the UKC is they do recognize the “Total Dog” …to some extent. They do offer recognition and a ribbon for dogs that have certain show win and qualify in a performance event on the same day. They say it they are about the total dog, but it isn’t much more then lip service. The SV shows you simply cannot compete in the show ring any more unless you have proven your dog is a “total dog.” IPO title or HGH title.

So while they try a little harder then the AKC they still are really all about showing.

OK relax Julie. UKC shows are what they are, and if I could relax, and take them for what they are I would have less stress in my life.

Went to a tracking seminar this weekend w/Libby and some of the club members went to a UKC show in Buffalo. Long story short, they said I should show Libby & Z-evil one in conformation. I said, but Libby is spayed and Ziva will be. Oh, that doesn’t matter, they have a division for altered dogs. Are you kidding me???

Congratulations Jack and Lynda. Lynda you did a super job handling! Aiden looks gorgeous! You know around 1 year of age can be one of the worst ages to look at a male GSD? They can be so stagey looking, but not Aiden! Hopefully your next show you can find one with performance events so you can go for Total Dog.

Sorry about getting on my soapbox in my other comments.

Aiden is such a superstar!

Julie,
Not seen as a *soapbox* moment. 🙂
Terri

Congrats to team Aiden again. Love the photo of “boys will be boys” He looks great.

Congratulations! You guys do such an amazing job and have such a great attitude no matter what the circumstances. Aiden looks awesome, and that last picture is a treasure!