As every German Shepherd Dog owner knows, it is VERY important to get a good ball on a rope for training. I personally believe that everyone should have at least two good, strong balls.

I used to get the yellow balls from EliteK9, but found them lacking. Batman would bust them within weeks. A year ago, I switched to Bende — these are Hungarian balls of solid rubber with a leather ball washer inside to secure the rope. (I cannot stress to you enough the importance of a ball washer.) 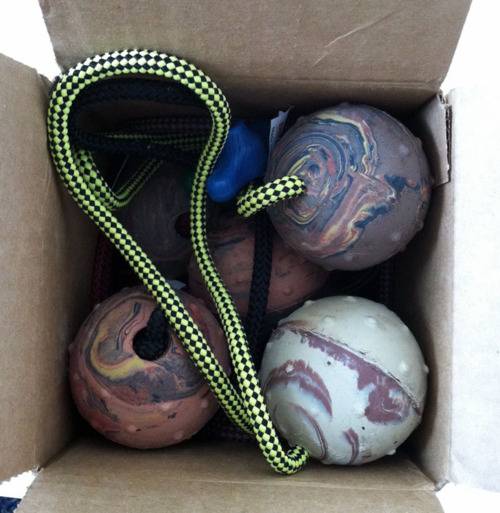 I ordered a bunch of different models (they come in all different lengths and loop/toggle options) from a small business in Pennsylvania called K9 Guardian. They ship within the US and the prices are great — $8/ball, plus shipping (cost varies depending on where you live). Unless you have a puppy, I recommend the large size, which is about 2.75″ in diameter. After experimenting with all the different rope lengths and handle types, these are my two favorite models:

I can’t say enough good things about these balls! I’ve used them for almost one full year, and NOT ONE has busted. We are still on the first ball (the ball on loop), and we have used it daily for a year. I’ve actually given away most of the balls from that first shipment as gifts because I don’t see how I’m going to use them all in Batman’s lifetime.

The only issue I’ve ever had is Batty dislodged the leather ball washer from one, and one of them has its rope frayed — both of these things are avoidable if you keep an eye on your dog and don’t let him chew the rope part (my bad). The balls themselves have never been busted or split, even after heavy use. What can I say, those Hungarians have SUPER balls!

When you throw them, toss them underhand by the rope. And throw them far, far away from trees!!! No one wants their ball stuck in a tree!

THANK YOU SO MUCH for posting this info! I have yet to have one of these balls out. They even survived Kira. I only have had to replace these balls because they have been “borrowed” or I have thrown them into very high tree branches.

I have to have the ones with the toggle.

The price of the 2.75 balls is equivalent to what I pay in Germany at the sieger show.

Florida people can get Bende balls from me if they visit Camp Kayla. The price from K9 Guardian is great but shipping gets a little pricey if you are only ordering one or two balls.

Eh, so far only Syd has been able to kill a Bende ball.
At least I think she did. Right, Barb?

I like the Elite K9 balls for kids who have moved up to the larger size ball but whose teeth still coming through. So the moral of the story is that unlike Jennie, I like a variety of balls—but all must have ball washers. 😉

thanks, for this, JK, I just ordered both of these balls.
nancy in cambridge ma (for my girl, Zorah)

Thanks Jennie – I finally ordered 2 of these today but shipping was $14 something so about $30 for the pair. Looking forward to getting them though.

Given the rave reviews, I ordered one right away. Zorah tore the loop off right away, in minutes! That was a surprise!
Nancy

I use a pair of Gappay balls. And I wash them myself…bc I’m not sure if they have a built in ball washer. This pair of balls are old and not really pretty…but they do have staying power. Rudi was crazy about these balls. And now DuKe is using them.
Maybe I use them differently that makes them last longer? I only use them for fetch games or a reward with a quick tug …then out. Rudi didn’t chew on them…just fetched and outted.