Yes, the two wild, unruly, bad-assed GSDs have graduated from O-Town without the use of the head halter. For all of the glares and rude comments that we received we were both invited back. And even though they know that the Big Z is headed for greater things, they said that they hope to see ME back again!  LOLOL! Where’s that wine?!!?

Sorry, no pix. However, here is proof that the Big Z completed this gig. Of course, the instructor handing out the certificates still didn’t know which was The Big Z and which was Y-K-Y.  Yeah, they look so much alike. After eight weeks and such a tiny class one would hope that at least your dog’s name would be known. 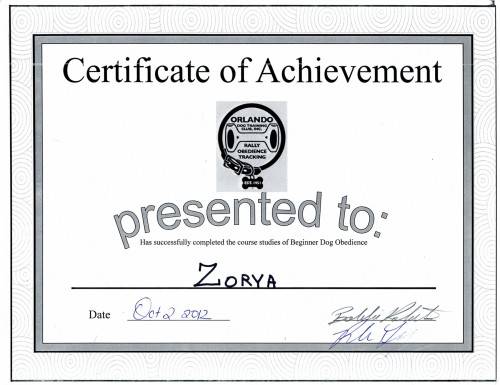 Big Z and Y-K-Y were on their best behavior last night. We kicked butt on all exercises, including foosing in a group! Our little pups—naked—no head halters managed to do just as well or actually better than the other two who managed to show up for class. AND we were the only 2 with perfect attendance!!  You know me. Why stay home when I have an opportunity to go torment someone? Besides, there was wine involved. 😉

Recall – they still do not get it. Big Z does her usual rocket recall. When she gets to me we play tug with the ball. Grab it says, “Now can she do it without flying to you and sit in front?” I said, “NO. But she will fly in AND sit in front.” Grab it has a smirk like, “yeah, right.” “HERE!” Rocket launch, “Sit!”, brakes slammed on and sat in front. We tugged. The End.

I’m bummed that your class is over. I enjoyed reading the updates every week!

I think you should indeed go back so you can continue to entertain us!

So is Zorya on her way back to MI? I look forward to seeing her in person some time. Sadly, I won’t be at NASS (it was my only available weekend for AKC agility and I’m trying to finish up a couple of titles).

Are you taking Ziva’s Momma Bailey to the show?

I agree Charlene I have also enjoyed the training class stories.

When I come home from NASS, the Big Z will stay with Poppa Judd.
Best wishes for the agility competition! It would be nice to see Bailey again. She has always been one of my faves.

Ok Carole, you will be the official Dog trainer for the NASS newbies! I assume we can leave our head halters at home???

Good idea Lisa. We need to get Carole to do some training sessions. I also asked Cindy (whom you will meet) to do some obedience sessions with us….no reply from her yet.

Know their names? I would think they’d at least get their sex right. Grab it kept calling Y-K-Y “she” last night. Carole, you forgot to tell the part at the very end when Y-K-Y and the Big Z looked like they were reenacting the scene between Simba and Scar, raring up and pawing each other. LOLOLOL.

Carole
Reply to  Scarlett and Michael

LOL—that’s right, they did! I heard Grab It say to that lady, “Pick up the little dog!” Our kids didn’t even notice the little dog. If you can’t tell that Y-K-Y is a male, then you shouldn’t be in dogs. There is no way that he could be mistaken for a girl.

Congrats!!! You’re prize is on the way!

My cheese whiz and Ritz crackers are waiting the arrival of my Boone’s Farm. 😉

no idea if momma Bailey is entered in NASS or not. I’m not showing her that weekend so she’s available. How ’bout it Julie? Are you taking her along?

Wow… you made it to graduation and attended every class. Way to Go Carole and Big Z & Scarlett and Y-K-Y. GSD’s rule!

Congratulations to you, Carole, Big Z and Y-K-Y. I know how challenging it is to take our brilliantly responsive super-dogs to class, where they can behave like boneheads that have never seen the snap-hook end of a leash. And, to think that you did it without the Gentle Leader that she not-so-gently was prodding you to use! Wow. What a great accomplishment. Your perfect attendance is also commendable; there are many times I have to force myself to go to class, knowing that the other dogs will invariably taunt my boy, barking and growing at him as he passes. Apparently, his size, stature, and full metal jacket (read: huge bad-ass GSD) appear threatening and other dogs emBARK in self-defensive behavior without any provocation from Dutch. I have to constantly manage him in order to suppress his natural urge to bark back by constantly dropping bits of string cheese and bacon treats every time he glances their way. When I leave class, my hands are covered with slobber, my treat bag is empty, and the instructor usually tells me that I did a great job keeping Dutch focused. But, guess what? I am so intensely involved in this preemptive management that I really don’t pick up the lessons well. I have to be on high alert, ready to drop a jackpot of treats when someone else’s dog is about to be called for a RECALL from across the room. One dog races across the room while the others start barking their tails off, and I manage to keep Dutch quietly lying at my feet. That is really why I’m there. That is the hardest part of class for both of us. His performance during exercises is usually excellent; he’s a recall rocket, too, with a solid focus. Problems sometimes surface in group foosing; we have lots of dogs with reactivity issues in this Level II class.

By the way, I forgot to mention that he received a FIRST PLACE ribbon in AGILITY at the end of his last class! It was the Level 1 Manners Class Obstacle Course, and his time was 15.78 seconds on July 31, 2012! I was so proud of him! We are going to do more Agility classes after this Level II class is complete. I want him to get his Companion Dog title first.

Scarlett and Michael
Reply to  Beverly

Congratulations on your agility ribbon! October is such a busy month, but I want to look into classes at other facilities later on in the month and I want to get into agility at some point. It looks like it’d be fun for both of us.

Beverly
Reply to  Scarlett and Michael

Yes, agility is really fun for all. Just like with kids, Dutch seems to love the agility action far more than obedience classes, although I think obedience is such a critical foundation for EVERYTHING else we do.

A funny footnote: Dutch tore his ribbon in half almost immediately. I was so disappointed that I asked the instructor if she could replace it, and she did. I guess it’s a reflection of Dutch’s agility that he can snatch almost anything at lightning speed, whether it’s a ball out of the air, or a ribbon hanging off a table!