Julie asked me to post this after I shared it with her yesterday.

I watched the program “Dirty Jobs” ……  “Inside A Rendering Plant” again last week and was reminded of the filth that some of these pet food companies feed to our furry kids.  The “Dead Truck” driver in the segment said that there are only a couple “Dead Trucks” in CA (where this one was filmed) to make the rounds to ALL of the farms that have dead animals to pick up.    He said, some of these cows and horses lay in the sun for 6 days or more before they pick up the bloated, rotten, maggot ridden bodies and transport them to the rendering plants.  By the way….no one was asking WHY the animal died!  Old age?….Disease?…….Euthanized???? (sodium pentobarbital does not dissipate in the cooking process)  He told the interviewer that they have to be careful not to let the animal “Explode” on them while chaining up the legs to be dragged up into the semi’s!!!!  This driver also revealed that these bodies are delivered to different rendering companies that process them into pet food, chicken feed and fertilizer.  This is what goes on all over the country!  And it’s not just limited to farm animals!  Euthanized companion pets from the shelter’s get picked up too! (I also have a movie showing this.) There are 3 to 4 million pets euthanized per year and they certainly don’t bury or burn them!  Too costly!

This program took us inside the rendering plant showing dirty, rusty machines that grind up the animals and cook them before the mix is delivered to the dog food manufacturing plants, which turns this mess into kibble.  This was SO unsettling to watch! By the way, the rendering company in this story was the only one they could find that would let them inside to film! Not something the pet food companies want publicized!

Disgusting what the FDA allows in pet food and sells it to the unsuspecting pet parent who thinks that pristine whole chickens and beautiful crisp fresh vegetables fall from the sky into these bags!!!

THEN, yesterday, I saw this article by Susan Thixton and was again infuriated and thought you might be interested in seeing what sits outside most dog food plants…..In this case Purina’s!

These telling picture’s are thanks to a concerned pet parent that happened to be in Fort Dodge Iowa where one of the the Purina Plant’s is located. 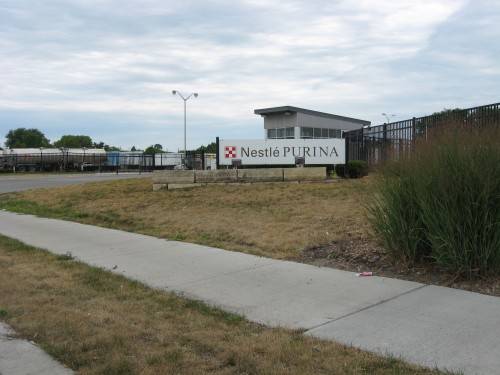 If you look at this image closely, you’ll see tanker trucks parked inside the Purina plant property… 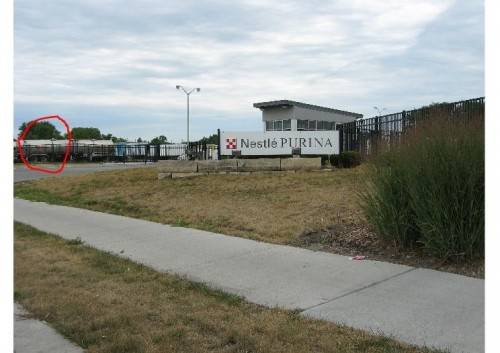 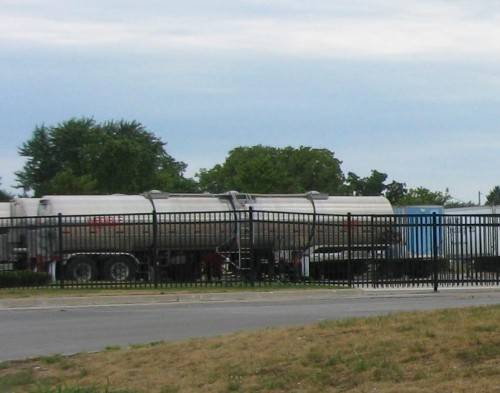 But this wonderful pet owner – that provided these pictures – didn’t want others to miss what was stated on that tanker truck.  So she took a close up of the tanker itself (that was parked inside Purina property)… 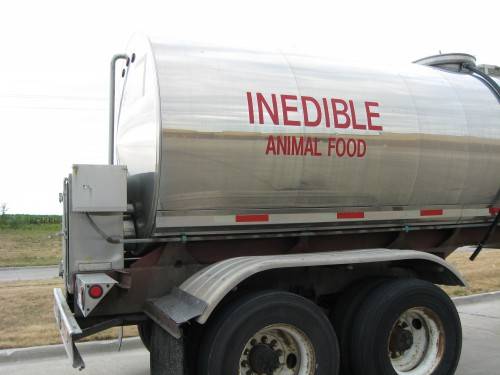 So what is “inedible animal food”?

Canadian regulations state “Inedible products include products which are, by their very nature, inedible (i.e. feathers, hides, hair), condemned, “previously edible” materials which have been condemned, and specified risk material (SRM) which includes recovered solids from waste water, on their premises, as prescribed in Section 28…”

To give a little more insight into exactly what ‘inedible animal food’ could include, the (U.S.) Code of Federal Regulations (CFR 314.10) titled “Livers condemned because of parasitic infestation and for other causes; conditions for disposal for purposes other than human food” states (bold added):

And federal law is concerned with the risks associated with ‘inedible products’.  The law is clear no diseased animal or diseased animal tissue (inedible) should come in contact with USDA inspected and approved products.  “Handling and Disposal of Condemned or other Inedible Products at Official Establishments” (Title 9, Part 314.8 b Dead animal carcasses)…

“Under no circumstances shall the carcasses of any animal which has died otherwise than by slaughter, or any part thereof, be brought into any room or compartment in which any edible product is prepared, handled, or stored.”

To be fair, all ‘inedible’ products are not diseased animal parts.  Parts of a slaughtered animal that are not commonly consumed by humans – such as internal organs (but including intestines) could also be considered inedible.  But significantly important, federal regulations do not require these types of inedible products to be “plainly marked inedible”.  Only diseased animals or filth contaminated products must be “plainly marked inedible”.

‘Inedible’ products can be shipped directly to pet food manufacturers or these products can be sent to rendering facilities to be processed into various pet food ingredients.  There are federal regulations governing the transportation of this material as well.  “325.11 Inedible articles: denaturing and other means of identification; exceptions” states “tank cars and trucks” containing inedible products shall be clearly marked as “inedible”.  The law even goes into great detail of how high the letters marking ‘inedible’ must be and expands into requirements to providing a clear background behind the ‘inedible’ markings.

And federal law defines an adulterated food (and thus prohibited) Chapter 9 – 342. Adulterated food: “if it is, in whole or in part, the product of a diseased animal or of an animal which has died otherwise than by slaughter.”

Inedible is a violation of federal law in all foods – human or animal.

Why isn’t federal law being enforced with pet foods?  Why are “inedible animal foods” allowed to be processed into pet foods without the very same clear marking – the required Inedible marking- on the pet food packaging?

Pet food consumers deserve to be informed of what they are purchasing.  If ANY ingredient within that food or treat was required to bear the Inedible marking, the pet food/treat should bear the same Inedible marking.  The law is the law…except with pet food.

Purina has probably changed their “parking” procedures. Next time these trucks will be hidden behind a solid fence.

Karen what do you think of Fromm? I’ve been using Fromm Gold lately (now that my store carries it) and other random stuff (I give my dogs table scraps, leftovers, raw eggs, raw venison, cottage cheese, raw beef marrow bones for special treats). Would love to go 100% raw but are dealing with an electrical issue in my 80 year old house and getting a freezer chest right now would probably start a fire.

Hi Lies!
I understand completely about not being able to get a freezer to feed total raw. There are many in the same boat for one reason or another, BUT you are feeding “little pieces of heaven” to your pack, which is absolutely GREAT!
Fromm’s and others (who don’t use the garbage in the above article) usually state: “USDA-Inspected Ingredients”. So then the question needs to be asked: “Are the meats used in all of your pet food products USDA Inspected AND APPROVED?” (there is usually a “play on words” in this industry to food the consumer!)
Per Susan: The response should be either yes or no. And, if you’d like proof – the pet food/treat manufacturer should be more than willing to provide you evidence to support their claim. The answer you want to hear is: “Yes, all meat and vegetable ingredients are USDA inspected and approved; poultry is Grade A, Beef is Prime, vegetables are Restaurant grade.”
Answers NOT acceptable are: “Our ingredients are sourced from USDA inspected facilities.”
“We use only the finest quality of ingredients.”
“Our pet foods are made in a pet food plant, it is illegal for us to state the ingredients are human grade.”
“AAFCO has no definition for human grade.”
If they give you those or similar answers, they are dancing around the issue!
Fromms is one of a very few who has very high standards during the production of their food! So that’s a good thing!
My other concern is the chemicals that the kibble companies are using, such as Sodium Selenite, which the dogs are ingesting EVERY DAY! ScienceLab.com states Sodium Selenite “may be toxic to blood, kidneys, liver, skin, central nervous system. Repeated or prolonged exposure to the substance can produce target organs damage. Repeated exposure to a highly toxic material may produce general deterioration of health by an accumulation in one or many human organs.” http://www.sciencelab.com/msds.php?msdsId=9927277
Have you ever considered SoJo’s Original? http://www.sojos.com Since your dogs are ok with grains, this might be a good product for you. It looks like Quaker Oats and you add your own meat to it. You can also buy it directly from the company! Since you don’t have the freezer space, you could just purchase your ground beef or turkey weekly to save space. You’d also want to supplement with a good multi vitamin. And of course, then there’s my favorite….:-)……The Honest Kitchen products which cost nearly the same as higher quality kibble! Some people ask me if I get some kind of discount or free food for always suggesting it……nope…..I just think it’s a darn good product (no chemicals & Human Grade) and I feed it to our fur kids when we go on vacation or I run out of raw!
Hope this helps! 😉

Have you ever heard of BARK by Biguns organic dogfood? Its a small company in Colorado that sources the ingredients locally & organic! Our dogs LOVE IT! been using for 3 years & not one recall. Its only available online but its free shipping & pricing is wholesale for all! Theres nonne of the chemicals & poisons from CHINA in this food!

Hi Barb!
No I have never heard of it! But I’m always looking for new companies to check out!
😉
Sounds like a good company but when I checked their site, it does not list exactly what is in each food or treat.
I have emailed them asking this and if their meats are inspected AND approved.
I’ll let you know the response!
Karen

Just got a “rejection” email back from sending a note to them.
“Delivery to the following recipient failed permanently:

barbanddanielle@gmail.com”
Barb, does your bag of food have another email contact on it?
Thanks,
Karen

Hi Karen, my contact info is for Bark :bigunsorganic@gmail.com. they seem to be fairly responsive to query.I think the email addy you were trying is not correct.

Thank you, Oh Mighty Guru for checking into this for us!