We were both a bit nervous as we entered the “Family Dog School” directed by Lisa Corbitt last night.  Dutch’s introduction to formal classes was delayed by our busy travel schedule, and the fact that his vaccinations were delayed, and we were reluctant to expose him to health risks.  We have been doing all our training ourselves, in many environments, with good results.  However, Dutch has just been more and more dog-reactive recently.  Initially, this seemed to begin when other dog-reactive dogs started to bark and growl at him first, but lately he’s been equally reactive, or been the initiator.  I was very worried that he would be almost impossible to manage in dog school with all those strange dogs.

But, with the help my AT friends, I was well prepared, and inspired.  Thanks to Jennie’s experience with Batman, I brought along his crate mat, a PB-filled marrow bone (a special occasion treat), and made fresh chicken treats.  We arrived early, and, as she suggested, I began engaging him from the start with commands and rewards.  We were able to claim a corner with his mat, and he happily chewed away while the instructor talked for 30 minutes!  Thanks to Kelli, I remembered to bring his beloved bully stick, and thanks to Carole, I confidently approached the class knowing that even if he behaved like a jerk, our kids have to sometimes make mistakes as they learn new skills, or apply old skills to new environments.  Carole, can you believe she said the prong collar was OK?  And, thanks to Lee and Julie, I have learned that “shhhh!” only elevates the tensions, and should NEVER be used to quiet our dogs.  Instead, we are working on the “enough” command.

Well, to my utter amazement, all these tools and words of advice paid off.  Dutch quietly chewed on the marrow bone, even when altercations broke out between other dogs with  barking growling.  I was able to relax in my chair, and hear so much of Julie’s training advice repeated by the instructor, including the old refrain, “Nothing in Life is Free!”  With my intense interaction during his work on the basics, he was able to sitz, platz, fus, komm, and stopp surprising well.  The instructor noticed his work, and toward the end of the class, asked if she could demonstrate what to work on using Dutch.  She asked about the words for his commands, and I told her that I was using German, but he also understands English.  She said, “so he’s bilingual!”  I said, actually, tri-lingual:  he also understands hand signals.  I gave her his treats, and handed his leash over, and he calmed heeled to the front of the class with her, his focus locked on her face!  He paid no attention to anything else in the room.  As she handled him, I watched in complete awe:  I never imagined that he would obey a stranger.  In fact, he was performing better with her than with me!  “Heel! Sit! Down! Sit! Heel! Sit! Down! Sit!” – he was doing dog calisthenics.  It was beautiful to watch him perform from a distance.  I am hooked!

After class, while walking back to the car, we passed a small white dog, and he started barking and pulling again.  Jerk. 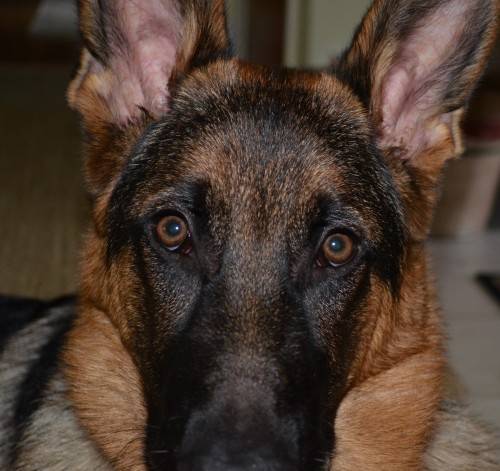 Don’t you love how they let you build up that great balloon of pride and then they giggle under their puppy breath and pull out the pin to POP it!

That’s great Beverly. If there’s one bad thing I was always guilty of it was under estimating my GSD. He never ceased to amaze me and perform above and beyond my expectations in almost every situation. Quite often I found myself worrying or being nervous for nothing.

You made me laugh on the last part of the story. bwahahaha.

Fantastic! Thanks for the follow-up. I, too, laughed at the last lines.

YAY!!! I am so proud of you and Dutch. This is just super.

Hi Beverly, I love your recap of training. Don’t be too upset by the barking at the end, he is young, full of attitude, excitable. It is his age. One trick you can do is just pull directly up on his collar lifting his front off the ground when he stops barking let him down, repeat as necessary. They figure it our quickly.

ooh, this is a good tip! Although I can no longer lift the 80 lb Batling off the ground, he is very responsive to pressure on his collar during the “out” command. I’m going to try it today!

Ok, I’ll give that a try, Julie. Do you say anything when you use that correction? By the way, I still have to pick up Dutch to put him in the back of the Suburban, and take him out. I bend my knees, trying not to injure anything, but he definitely doesn’t want to jump out of the back, or up into it. We have a pet barrier installed behind the seats, so we can’t get him in any other way. Also, we’re worried about him jumping that high. It is 29″ to the top of the bumper, and 34″ from the ground to the “bed” of the Suburban.

I do not let youngsters jump in or out of anything that high. As the pup gets older, I teach the pup to put its front paws up and I help boost up the rear.

You might want to consider getting one of these dog ramps: It will save you trying to lift your boy now he is getting bigger.
http://www.solvitproducts.com/products-ls798_1_ls-i42_i.aspx

They are great. Very light weight and easy to use. We have a Honda Pilot and it is too high for Dylan to jump into. I don’t like the dogs jumping out onto the driveway or other hard surfaces either so always make them walk down the ramp. As Carole said, you should never let young dogs jump up or down too high.

You might want the XL ramp for your Suburban as it is 15″ longer but the other one might work fine:
http://www.solvitproducts.com/products-ls798_1_ls-i44_i.aspx

Nope say nothing, just concentrate on your timing. Lift up when obnoxious and set down as soon as calm.

I haven’t been able to try this on Batman yet because the moment I get up to do it, he stops barking and looks at me, like, “What? Me, bark?”

Congratulations Bev and Dutch. All of the work you put in has paid off and he will remember the groundwork you have laid. You are a great owner and he is a great dog too. He just acts up because he can.

Yes, our dogs are so great. The bar is is high for us as owners/trainers. It seems they can do anything. Sometimes, the best part is enjoying my GSD shadowing me everywhere – I feel so loved, so safe!

Thank you, Lynda! Not only will that ramp be perfect for Dutch, but we can also use it for Beaumont, who, at 11, isn’t the jumper he used to be. It looks quite well made, almost like one of those U-Haul truck pull-out ramps that I am all too familiar with!