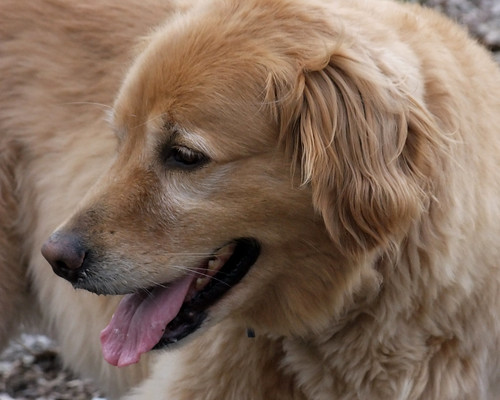 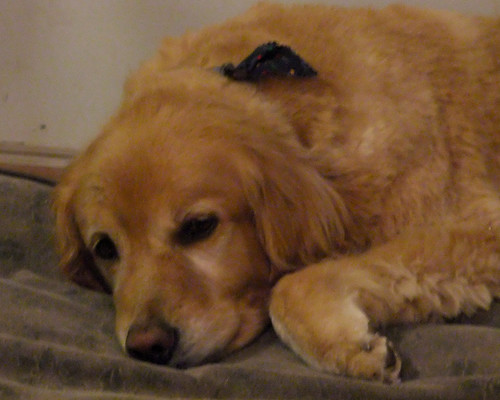 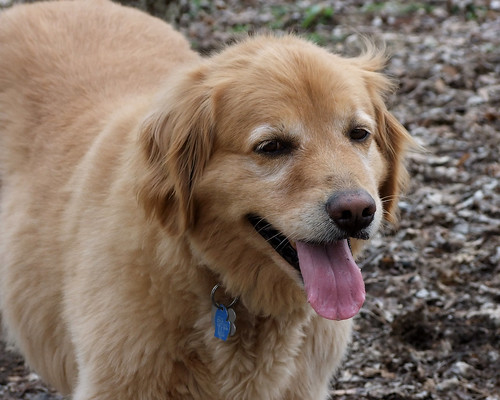 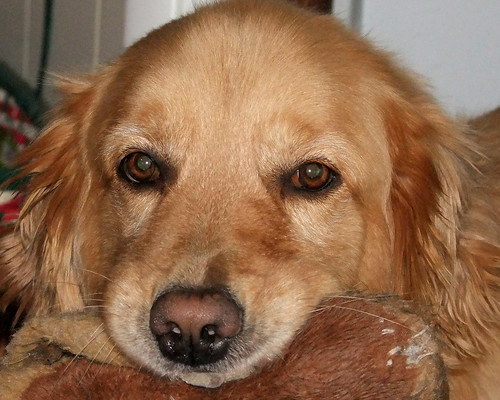 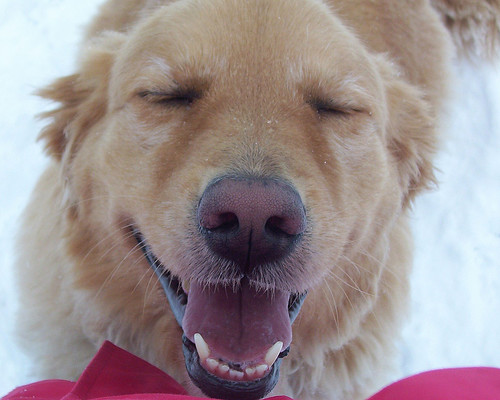 It all happened very fast. It started on a Tuesday. Casey seemed to be favoring her right front leg. I didn’t think too much about it because she was our ‘official puppy raiser’ and she spent a lot of time with Shotzie. Kaline still can’t be trusted and Sophie would rather hide under the car than deal with a puppy. Anyway, I figured Shotzie had bit her or just twisted it a bit — I wasn’t too worried. I just gave her as Ascriptin for pain.

Wednesday she was worse, so I made an appointment for Thursday with the wonderful Dr. Steve Miller. By Thursday she seemed even worse and seemed to me to have some weakness in her rear. Steve examined her and couldn’t really find much so he thought it was just a sore shoulder muscle…. but then he took her temp and it was high. He took it again. He said that was odd. He ran some routine blood work and a test for Lyme Disease and sent us home with pain meds and an antibiotic. He said she should be significantly improved in 3 to 4 days.

On Friday, we learned all the blood tests were negative. Steve said to continue to give the meds and call him on Monday to let him know how she was doing. By Saturday afternoon though she was worse. She had trouble getting up, had trouble navigating the couple of steps into the house, had developed a head tilt, she wouldn’t maintain eye contact, and she was kind of listing to the left. We discussed taking her to MSU then but I have such faith in Steve that I thought if we could just get her to Monday morning, maybe he could do something. She definitely seemed better when the pain meds were in full force, but they didn’t last the 12 hours we were supposed to wait between doses. We gave them a little early.

By Sunday morning it was clear we were not going to wait until Monday. We took her into MSU emergency. There she was initally diagnosed with Polyarthropathy. They did not think it was a dire situation. We left Casey there with the understanding that she would be assigned to an internist on Monday morning and that some fluid would be taken from her joints and analyzed to see what was going on. They were also going to take x-rays.

First thing Monday morning I got a call from the internist. She did not agree with the diagnosis from the ER doctors. She said something was going on with Casey’s brain and the Polyarthropathy was secondary. She had done a complete neurological exam and found the same issues we had — head tilt, funky eyes — among others. She said there were three possible scenarios. ‘Old doggie syndrome’ — or something like that — basically doggie vertigo, cancer, or a fungal infection. She went back and examined the x-rays which were initially viewed as clear and she found ‘nodules’ in Casey’s lungs. They were too small to do anything with though so she recommended an ultra sound of Casey’s belly to see if they could find more nodules that perhaps they could access to aspirate. They found many. Unfortunately, the tests were inconclusive.

We were left with the last option to figure out whether is was cancer or fungal — an MRI of her brain along with a spinal tap. We gave the go ahead to do this. It was scheduled for Tuesday afternoon. At this point, the thought was that if it was fungal we had a ‘shot’ at treatment. Craig and I wanted to come and visit with her before the procedure — we thought it would do all of us some good. Julie, when we saw her it was absolutely heart breaking. She had really deteriorated. I don’t think she recognized us initally. We spent some time with her on the floor and there was no tail wagging at all. Casey used to wag her tail constantly and involve her whole body in the process. She just laid in Craig’s lap, panting, and looking off into space. After some time loving on Casey and more discussion with the vet about the liklihood of recovery we decided to end it then.
Thank you for your kind words of comfort. There aren’t too many places one can express how much this hurts — without people thinking you are nuts. Our critters just mean so much to us — and it is hard to explain to folks who either don’t have them or don’t feel the same way about them.

I am so sorry to hear this. Many of us share your pain and have experienced losing a four legged family member far too early. It sounds like she had a wonderful life and you gave her the very best care available. That last picture speaks volumes about her.

I meet Craig and Laura when they came to my puppy class with baby Casey. She was everything a GR should be sweet and loved everyone. So hard to believe that was 7 years ago, but most definitely not long enough for Casey to be with us.

I am so sorry Casey is gone. Godspeed Casey.

I am so sorry about the passing of your sweet Casey, she looked like such a nice dog, and it is quite apparent Casey was well loved, she’s running free now, no longer in pain. RIP Casey.

How hard it is to lose such a loving friend. Be happy for having had her and enjoy your memories. Know your Alta-Tollhause blog friends understand and support you.

God bless you and sweet Casey.

Laura, I am so very sorry for your loss. Your pictures of her are beautiful…that Big Smile will be in your heart forever. It is clear how much she was loved. Hugs.

Craig and Laura, we join with so many others in the Alta-Tollhaus family in sharing in your loss of your sweet Casey. Imagine a big group of us in a circle around you, in a big hug. Most, if not all, of us, have felt this pain when a beloved part of our family has passed. Through some miracle of time, eventually we are able to draw comfort from the memories. Dogs truly wrap themselves around our hearts. The pictures clearly show how sweet and precious Casey. She will live on forever in your hearts.

Sooo sorry to hear about Casey..I love the last shot of her. Such joy and happiness on her face.

I’m so sorry to hear of your loss. She looks like she was a sweet girl who had a great life. No matter how long they are with us it is never long enough. This quote was sent to me when I lost my dear Maggie.
“Some dogs are special dogs, even though they are not a first dog or an only dog or a last dog. In a crowd they stand out and in the heart they have a special place and when they leave, that place stands empty forever.” Sandberg

God speed to your girl until you meet again.

Craig and Laura,
Jack and I are so sorry for your loss. We know how you feel. Each dog touches our lives in their own unique way.
Our thoughts are with you during this difficult time.

I am so sorry, Laura and Craig. What a terrible loss for your family. We are thinking of you and your pack, and we’re here for you always.

We are so sorry to hear of your loss. She was taken from you prematurely and no words can truly express what you are feeling right now. Your love for Casey will continue.

Thank you for all the kind words of comfort.
This post started out as an email response to Julie — I had contacted her to thank her again for Shotzie (lime-green girl, X litter). We have had some difficult days around our house lately and if it weren’t for Shotzie there wouldn’t have been any laughter. As I overheard my husband say, ‘Shotzie brings such joy to our lives.’ Amen to that.

So sorry to hear about Casey. She was a beautiful girl. Love to you and your family.