The X and Y litters are alike in some ways and different in other. They are alike in both litters are social pups, love attention and people. The Y-litter is much more active. From early on the “Ys” showed much more interest in tugging and biting things. The X-litter weaned themselves on their mother’s food, Honest Kitchen, and they always favored this food over everything else. The Y’s do not care for the Honest Kitchen unless it has additional meat mixed in. These Ys are clearly carnivores. I would prefer they eat the Honest Kitchen but they really like the kibble, and I believe, not so much for the food but more for the chewing. This litter has more a need for chewing things. They really love the Royal Canin German Shepherd formula for adults, even more then the puppy formula, because of the large size kibble. Overall the Royal Canin German Shepherd formula is good but it has a couple of ingredients that are not desirable such as soy, Dried Egg, Sodium Selenite and Copper Sulfate. Plus the meat it is made from is not human grade. Just listing it here is making me wonder why I am letting the puppies eat this stuff? I let them eat this because they like to chew, but really answer is they should be getting raw, whole pieces with bone and all so they can chew. I think I will get some raw chicken for them this weekend.

This weekend I plan on flooding you with pictures of the Y-litter, but to whet your appetite, here is a picture from 5 weeks of age. 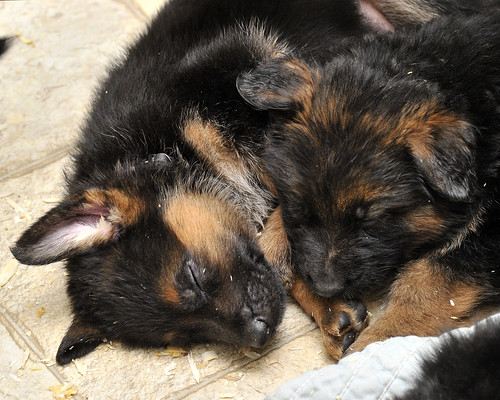 Caitlin has the collars all prepped for the Y-litter when they outgrow their current collars. But do you what she uses them for until then? She uses the collars to keep track of the puppies. Each big collar corresponds to the current smaller collar they have on. So what she does is takes a collar from one pile, finds the pup that matches that collar then does whatever she has to do with that puppy: socialize, give medicine, cut nails, etc. Then placing this collar in a new pile allowing her to effortlessly track which pups she has taken care of. Absolutely brilliant don’t you think? 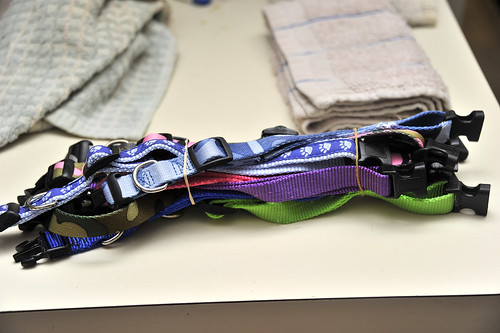 What a cute picture, I love the deep coloring on both puppies.

They are some great looking pups and are definitely little piranha’s. I love it when a GSD has such enthusiasm to crunch and destroy their food! When I used to feed kibble, I went with Solid Gold. Their “Barking At The Moon” formula is pretty good (for commercial food, anyway).

With all that enthusiasm, curiosity and get up and go, I’m starting to think that maybe this litter should be referred to as the ‘Y Not?’ litter… No doubt they are are all superstars.

You read my mind;)

Y-not? I love it Sharon!

Oh Julie-how absolutely perfect. O’Gryphon would be so proud of his siblings. He is still full of zest but now he does listen to what I am saying (at least most of the time) instead of trying to tease me into chase game or tug of war etc. Blessings to the pups new families.

Sounds like a wonderful litter. I am sitting here with Sade calmly resting at my feet. I love the use of the collars. How smart is that?

Y=Yummy! This is really nice litter. They are going to make their owners happy and BUSY!