As part of our never-ending quest for rear-end awareness, I made a set of Cavalettis for Batman this weekend. Cavalettis are short hurdles most commonly associated with equestrianism. I wanted to buy a set of 6, but at over $30/each with shipping, I decided to make a cheaper version using 4″ PVC pipes and fittings. Cost: $10/each. They’re not the most aesthetically pleasing, but they do the job and are dead simple to make. 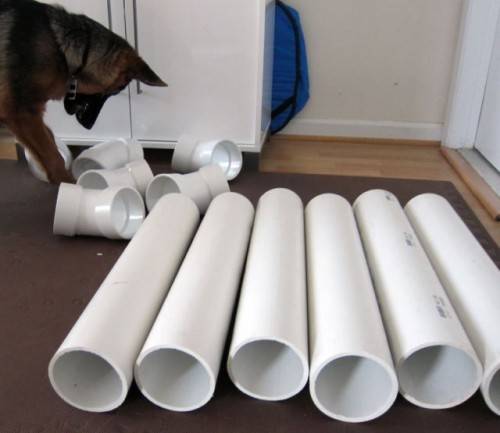 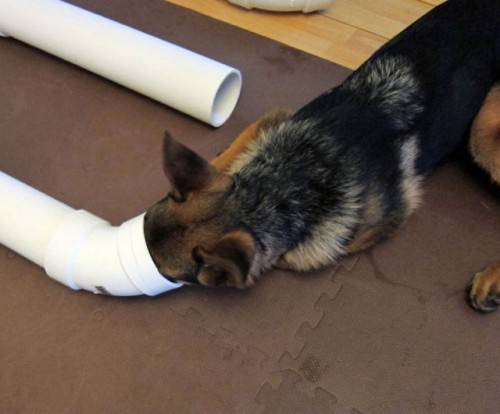 Just making sure there aren't any squirrels hiding in here! 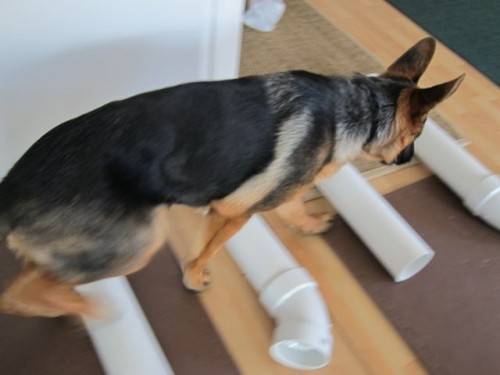 I like Cavalettis more than the agility ladder for indoor work because the agility ladder I made isn’t very portable and thus lives outside on the balcony, and also because Cavalettis are more flexible. You can arrange them in different configurations all around the house, fan them out, practice doing turns, and other creative things.

Batman is so fun to teach. It helps that he’s so food motivated, and so smart. We just tried this exercise for the first time yesterday. This morning, we came back home from our walk, and he ran into the room, saw the pipes, and tried to run across them, even though I had pushed them all together the night before to get them out of the way. He leaped on top of the pipes and plunked his bat paws in between them.

Luckily I had my camera in my pocket, so I could capture the moment: 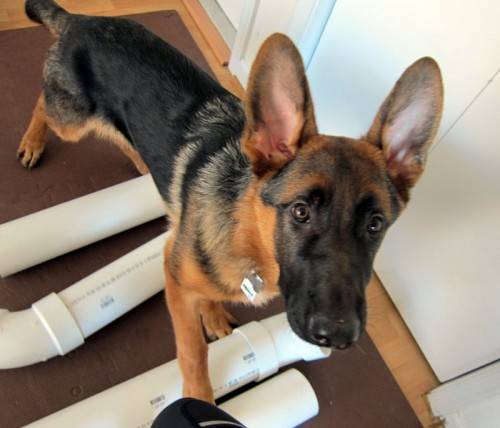 Why are these all bunched up? Here, let me space them out for you! Now where's my treat?

Julie, have I told you how this puppy is the light of my life? He makes me laugh everyday.

I love how Batman is so interested in everything you do and so full of fun. Checking for Squirrels is hilarious!
He is getting more and more handsome and growing into his “Bat Ears”!

This awesome kid is a real character! Jennie, you keep him wanting to do more—excellent job.

I love seeing new pictures and reading about Batman. I especially love the classic GSD expression in that last photo that puts 1,000 thoughts, statements and emotions into a single look.

He is growing into his bat ears!! His adult coat is coming out nicely, are you ready to have an adult looking GSD puppy?

Thank you for providing a link to Cavalettis, again, I had no idea what that was.

I love the picture of him looking for squirrels! Lol!! He looks like he is a real charachter Jennie and he is turning into quite the handsome young man! I love reading about Batman!

Jennie, No you have not told me how much you love your Batty—-today that is. 🙂 Batty is one cool dude, that is for sure.

I had to laugh at your statement “never ending search for rear-end awareness” I just came back from the grocery store where I saw an old man gawking-staring at two young mothers in their very tight jeans. I had to stop and stare at the old man staring at the young women and smile. Men are born with rear-end awareness and apparently they never loose it. It made me laugh.

Thanks, everyone! The only limitation to our work is my own imagination. That is the great thing about Julie’s dogs, it’s such a luxury to know that whatever you think of, your dog will be up for the task, and then some.

I think Lee hit the nail on the head about Batman’s facial expression. Batman is always wondering what crazy thing I’m going to ask him to do next!