Last week, just before hurricane Irene, we noticed Dylan was not picking up his toys in his usual manner (two or three in his mouth at a time) and seemed to be having difficulty eating biscuits (although it did not stop him from trying to inhale them). He also had worse breath than usual. We tied to look in his mouth and as we opened it he screamed. Off to the vet we went. They said it sounded like he had an abscess, possibly caused by Foxtail Grass Awn. We had never heard of such a thing. They kept Dylan overnight and did surgery. He came home on antibiotics and pain meds on Friday. On Saturday and Sunday he seemed to be doing okay and was at the shelter with us. On Monday morning Dylan’s face was swollen and his eye looked horrible. I rushed him back to the vet. He underwent more surgery and they put a drain in his face for the abscess.

He is home again and this is what he looks like…. 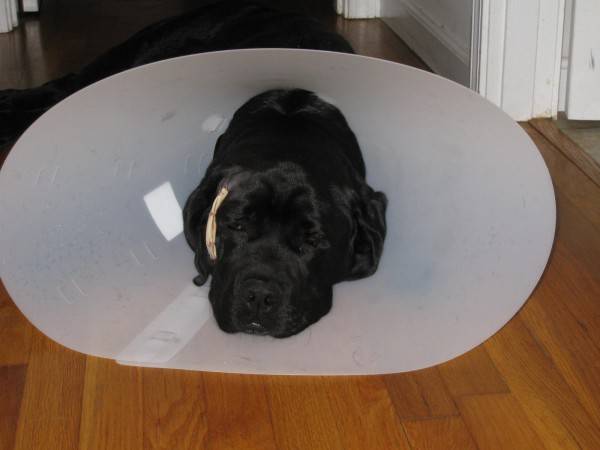 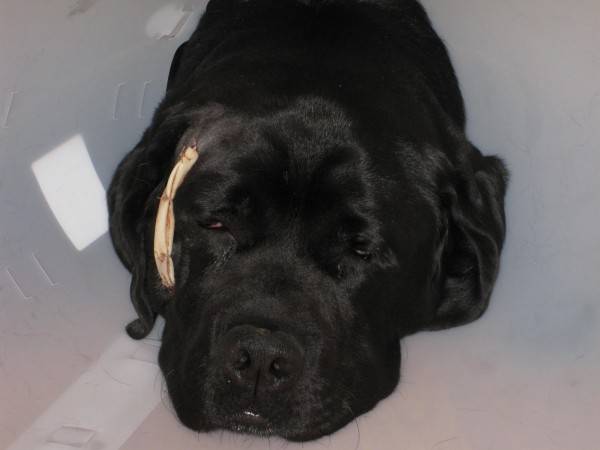 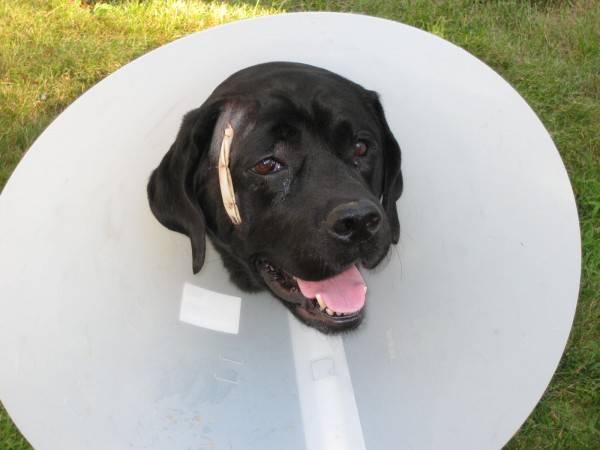 Here is some information I got off the Internet:

Recently we have been treating an influx of pets with foxtails embedded into ears, nose, between toes and other various parts of the body. Some dogs enter the clinic sneezing violently, some with a constant head-shake, some with an abscess or swollen eye. These foxtail injuries are very dangerous to your pets and should be treated immediately. Foxtail barley is a perennial grass, commonly found in yards, fields, along roadsides, trails and in most canyon areas. They grow quickly during the rainy months, in almost any soil condition, and dry out during the warm summer months. Once foxtail grasses dry out, the seed detaches easily and sticks to clothing and fur. Foxtails can enter a dog’s body in a variety of ways and once they enter, they are like a barbed fish hook: The seed only wants to move forward, burrowing into the skin. It’s most common for a foxtail seed to enter a dog’s body through the skin, nose, ears, paws, and eyes. Foxtails are very tenacious, painful and dangerous to your pet. Foxtails in the ears, nose, and eyes are very serious and can ultimately be life-threatening if they are not treated promptly.

Foxtails burrow. The outsides of the “seedlings” contain a bacterium with enzymes used to break down vegetation. This bacterium also allows the seedling to burrow into a dog along the tunnels of pus created by the enzyme.

Mouth: Dogs can get foxtails in their mouth. The symptoms of a foxtail stuck in the gums, between teeth or back of the throat include a painful mouth (difficulty eating and drinking), gagging, difficulty swallowing when eating, etc. If swallowed,
foxtails can be passed. However, if it gets caught in periodontal pockets, the tongue, in between teeth or in the back of the throat, it can cause problems.
You can tell if this has occurred, not only from the above symptoms, but possibly your pet may have a foul odor coming from the mouth. Your vet will anesthetize the dog, then locate and remove the foxtail.

The danger for pets lies in the “invasiveness” of the dry seed pods found in late summer and early fall. These pods have one-way microscopic barbs that allow the seed to work its way into fur, skin, and mucous membranes, but not work itself back out, much like the one-way movement of porcupine quills. Foxtail weeds shed
very small black seeds which also work their way into fur, skin, and tissue.

Poor Dylan is right! I have Foxtail experience from living in CA. Actually, I thought it was just a CA thing and didn’t know that it grew on this coast.

I had never heard of it Carole. At first I thought maybe he ate different grass when we were in Leominster, MA (still on the East coast ofcourse!) but the vet said they have seen quite a few cases of it in the past couple of weeks. When I researched it on-line most of the cases mentioned CA but no where else….

Poor boy. I hope he heals quickly. Would have never thought to worry about foxtails. will add them to the worry list and hubby’s list of weeds to pull. I am sure as soon as I go out I will see them everywhere I look. Gentle ear scrinches for Dylan.

Poor Dylan. Wish him a speedy recovery. I hate it when our babies get hurt.

Hope Dylan is feeling better by the hour! Isa sends a lick. 🙂

Poor Dylan! I feel so sad for him looking at his little face!!

Dylan sure looked like a “Sad sack” in those pictures!
He appears to be feeling much better already with the drain in. He went back for a check up this afternoon and the vet was pleased with his progress. He said we could take the drain out tomorrow afternoon.
This evening Dylan picked up a toy, even with his cone on, and seems to be getting back to his happy self!

Poor Guy! I hope he has a speedy recovery. Lynda, if he is miserable in that big plastic lampshade, you might want to try the Comfy Cone. My boy had to wear one recently so I bought him one of these and it was much better for him. You can just do a search on Amazon for “Comfy Cone” and you’ll see it. It’s the same principal as the lampshade, but it’s made of a softer foam type material. My GSD used it as a pillow even.

Thank you for the information. Luckily Dylan does not have to wear the cone now.

Oh, Lynda! I sure hope Dylan is feeling better. I am sending Shane out with the weed whacker and some Roundup, on the hunt for foxtail…….I saw it in Ohio, but didn’t realize it was in New England too!

The Foxtail does a lot of damage. Margot from the Ann Arbor area has had a number of bad experiences with Foxtail grass. Nasty stuff.

Speedy recovery wishes to the most handsome Lab in the world.

I’m sorry Dylan! You’re still handsome. I love that you can still smile through this.

After Dylan’s good check up on Wednesday night he was gagging and had a swelling again on Thursday….back to the vet! They took the drain out and sent him home again with instructions to do warm compresses and continue the antibiotics. I’m please to say that Dylan seems to be getting better each day. He was much more “himself” this morning.

That’s great Lynda, glad to hear Dylan is well on the mend. He now has a new title, “Super Hero” only he had a cone rather than a cape! I guess you could say he is a “Super Hero with a Cone on the Cape”!

Andrea, you win the prize for your Super Hero description of Dylan!