Via the Nekkid Butt Gimp

At the dog show Saturday, Via (O-Litter)came up short on the right hind during the flying trot.

Via was still limping (but not nearly as much as she was on Saturday) last Friday morning. I called local sport medicine vet office, the Twin Cities Animal Rehabilitation Clinic, to make an appointment for the next week or two as they always have a seriously long waiting list.

I figured I would cancel it if the puppy stopped walking with a stiff-legged gait and the expense of a vet visit was no longer needed. As my poor luck would have it, they had a cancellation and could take us right away. The office is a 12 minute drive so we went.

Dr. Julia Tomlinson, who is a Certified Canine Rehabilitation Practitioner (CCRP), Veterinary Spinal Manipulative Therapist (animal ‘chiropractic’ equivalent), a board certified ACVS veterinary surgeon, a PhD in Physiology, was very good with Via.

The doc spent over an hour watching Via walk, measuring her muscle mass, checking her range of motion, collecting history and assessing our performance goals. She put her hands on every muscle on Via’s body. She stretched her. She poked her. She twisted her. She turned her. She stroked her. She pulled on her toes. She was looking for lumps, hot spots or pain points in Via’s muscles.

Via just relaxed on a mat on the floor and inhaled freeze dried chicken livers provided by the clinic. She got a little frantic taking them when Dr. Julia hurt her with a right quad stretch but was otherwise quite good. The vet commented on my puppy’s calmness, her ability to get into and stay in a settle on either side and her nice structure.

Via’s joints are fine. Her patellas are stable. She yelped on palpation of the right proximal rectus femoris muscle that flexes the hip. The muscle crosses two joints and is prone to injury. The doc told me that she could feel a knot. Via was not happy with the doctor’s attempts to work it out. The doc commented that Via must have been was injured well before the dog show because the knot had calcified and that Via’s left triceps had grown a centimeter thicker than the right to compensate.

The treatment goals are to return Via to full, unrestricted pre-injury activity level, decrease her pain and restore functional length and strength to the muscle. 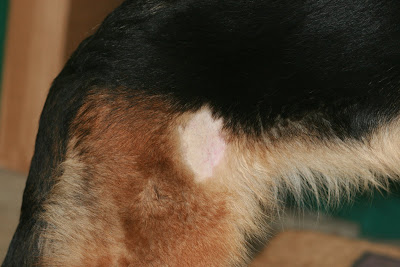 The vet shaved Via’s hip and applied ultrasound over the mid and proximal rectus. Via was scheduled for four more over the next two weeks.

The hard (for me!) part is that Via is restricted to being crated or leashed until further notice. Her use of stairs is to be minimized and she gets two 15 minute walks a day – over flat grassy surfaces. We are allow to use the walking time for tracking as long as Via is doing her tracks at a walk. After the course of ultrasounds, the vet will check the healing and design a rehab plan that will most likely involve an underwater treadmill.

When we went for treatment number two a couple of days later, Via had an infection stating in the shave area and an infected Acral Lick Granuloma just getting started near the shave site. Instead of Via getting the ultrasound, Dr. Julia used a laser over the two infection areas and sent us home with seven days of antibiotics and a return visit on Friday for a skin check and maybe an ultrasound.

Via is so well muscled and so young that the recovery should be fairly quick, the doctor said, adding that is if I can keep her relatively still. Via is a bouncer and a bounder and a leaper and a busy, busy girl.

Average is about 8 to 10 weeks. Maybe the hair on her behind will have grown out by then.

Keeping the darn puppy still has been interesting. I rotate Via and Blue, my adult GSD, who are great play buddies in an out of the house and in and out of crates. So today Via has decided that she’d get Red, Mr. Laziest Dog in the World Grump Pants Greyhound to play with her. Her tactic is to zoom around the room leaping over the furniture doing run bys pausing to stick her shaved behind under the Red Dog’s nose. Sigh.

Poor baby!! Do they know how she injured herself?

Via is never still. Why walk when you can gallop? Why go around when you can go over? And she throws her entire body into whatever she is doing.

She is very stoic. She runs in to walls chasing her toys. Trips up and down the stairs. Body slams in to Blue (and any dog or person that she plays with who will put up with it.) Slides to scrambling stops to change direction while playing. Throws her body around with abandonment in water, mud, sand or grass. I cringe on her behave sometimes, yet I have never heard her yelp.

I hope Via’s injury heals quickly, and am happy that you have such good care at your disposal. What a challenge, I always love reading your posts so much because Sydney shares so many similarities to Via’s high-spirited character. Your second paragraph could be written about Syd, not always, but when she is focussed on play absolutely. I often end her whip-squirrel game early because I don’t like the level of intensity while she dives and slides on her front joints in pursuit of her catch. This is a real reinforcement that maybe I am not being too over-protective about things like that. Feel better, Via, poor kid.