Categories
Tags
We spent our Memorial Day as always in Palestine TX, Odin came with us and he had a ball. This boy has a rock solid temperament, machine guns, canon firing, train noise, screaming kids/adults none of it fazed him. The only thing that bothered him is when his little boy cried. Odin got on the train pretending to be one of the soldier’s dog, his job was to find the “spy”, my phone was too slow to capture the moment he found him and also, the passengers were all standing up taking pictures of him and were in my way. ha ha! We had to get special permission from the owner of the train (whom we met later on) to let Odin in the train as he not a service dog,  he was so impressed with Odin and he can’t wait to see him again next year.
I can’t even count how many people have come up to me asking me where I got Odin from.  One lady asked me how come Odin is so calm in public as her dogs would be acting like  total lunatics. I told her to get her next dog from a good reputable breeder next time and socialize socialize! 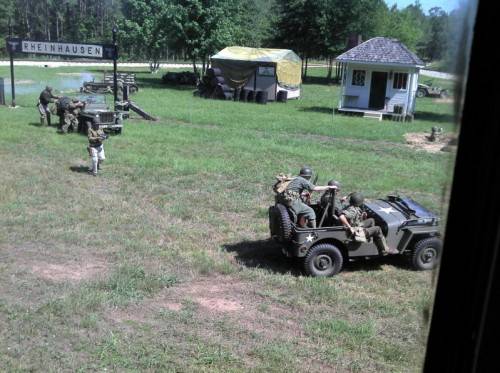 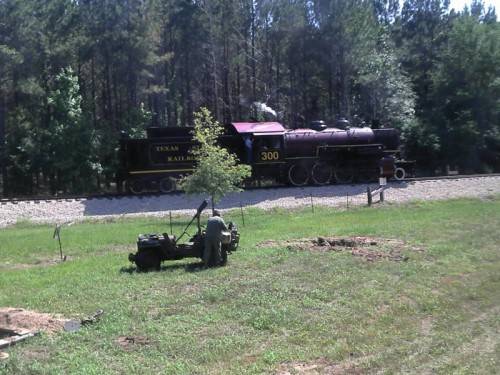 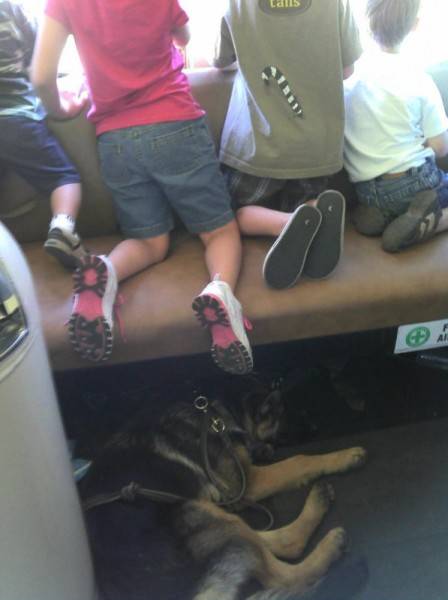 sleeping on the job! 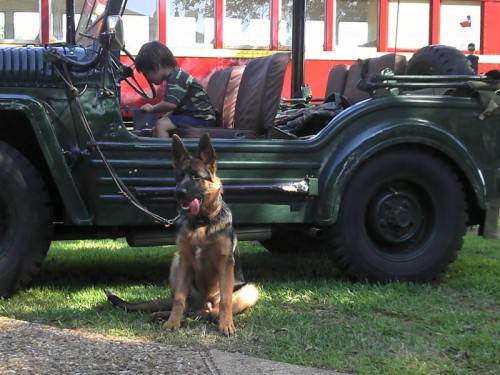 guarding his boy and his jeep 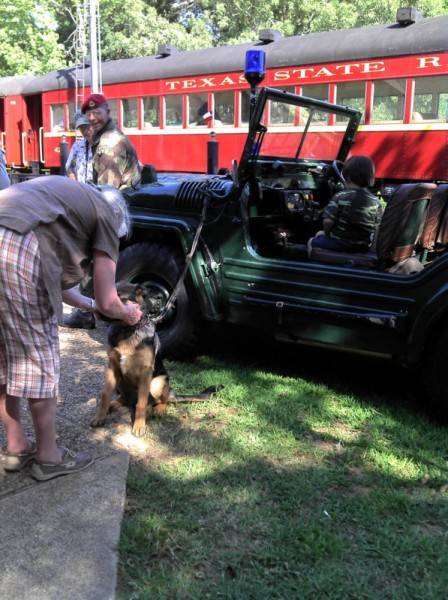 getting lots of lovin' 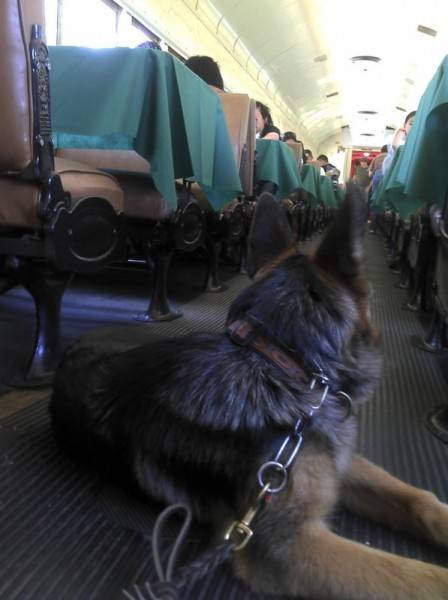 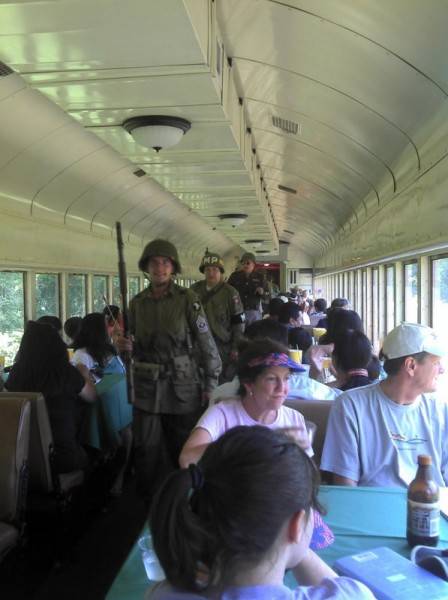 Patton and his men 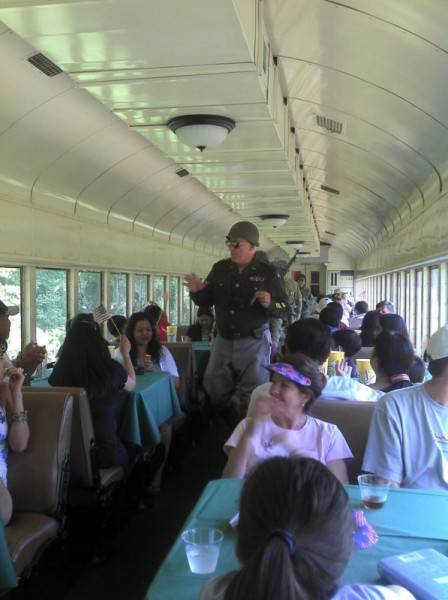 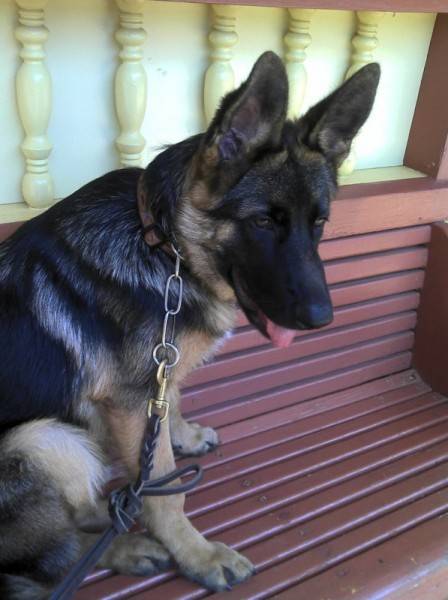 He was so exhausted when we got home! 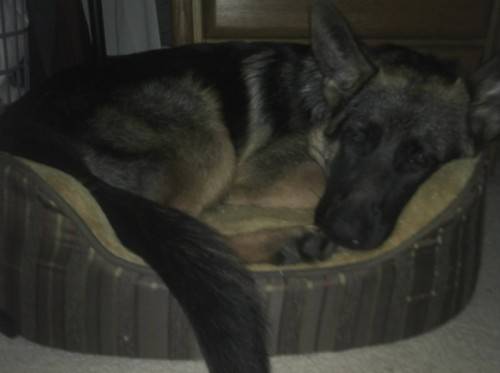 Rascal is going to kill you, that's his bed

What an awesome report and story. He’s all pooped out! He probably was thinking this bed looks really comfy, it will all be worth it, I’ll deal with Rascal later! hehe
Thanks for sharing.

This is so cool! There was an item on TV saying the public is allowed to adopt retiring service dogs now. The dog in the item had been a drug sniffing dog-the family was laughing at how the dog checks the kid’s backpacks, the husbands tool box and the filming crews supplies. Finally, we are caring a bit for those that have taken care of us so often.

How true Jean!!! I think that is a great program.

That is great! I think high school principals should adopt one of those dogs and bring the dog to school everyday, that would be a great drug deterrent!

I am very proud of young Mr. Odin. thank you for sharing Josie.

I play recordings of various sounds for the puppies and out of all the noises only one gets them upset…the crying baby. No matter how young the pups were they would get distressed over hearing the baby crying. so I re-did my recordings and took out the crying baby.

What a great Memeorial Day – I love the last shot. After all that, no wonder he was pooped out.

Great pictures and story. Odin is getting so big…and handsome!

I agree with Julie—EXCELLENT Patton! From looking at the pictures, you would never guess that this is Odin’s first re-enactment. He looks so handsome and is a credit to our breed. You’ve done a great job with him, Josie.

I’m sure Rascal was thrilled to have dog drool in his bed. Take THAT, Rascal!

What a great day, and so proud of Odin. He sure is a handsome boy….Wow, they sure are growing up fast! LOL, he looks absolutely pooped!!!