I would like to take bets on whether anyone’s pup has had a stranger experience in being introduced to a new animal…… Playing in the backyard with Grizzly late last week and a flock of seagulls come off the ocean soaring overhead….nothing unusual there.  Grizz just watches them flying around  and one of them accidently drops a live fish literally three feet in front of him…he looked like a deer in the headlights as this fish is flopping around in the grass thinking “What just happened????” ……he played with it for a few minutes and then went back to his stuffed squirrel.He has never seen a fish before and I think for the rest of his life he is going to think fish fly in the sky. 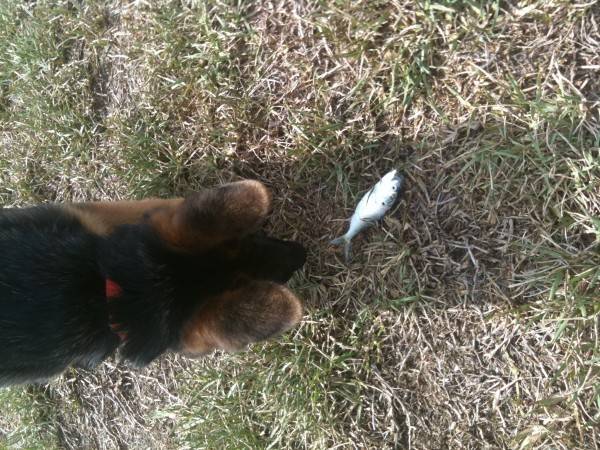 hahahaha!! Thanks for the morning laugh, that is so funny!

OMG too funny….and he didn’t eat it?? What kind of Grizz is he not eating fish???

John and Michelle
Reply to  Julie

This dog will eat just about anything—but something that stares back at him, flopping around, and falling out of the sky is probably a bit of a stretch for him to think its food!!!!!

Ok you have some good points there!

LOL. As I was reading this, I was sure you were going to say the seagull pooped on him!

No fish based protein sources for this boy. I wonder what he would do if he was able to get a woodchuck.

LOL, ok, you win … I wish we could see the expression on Grizz’s face….that’s hysterical!!!!

Maybe he thought it was a trap set by Carole and he better not touch it!!!

John and Michelle
Reply to  Julie

It was Carole’s final exam on the “Leave It” command !

Carole
Reply to  John and Michelle

This cracks me up!

Great story John and Michelle….I don’t think that has ever happened before! Poor Grizz will be watching the sky for flying fish forever.