I promised Julie that Pieka was getting a bath this weekend and more photos would follow.  I lied on the bath — I realized that, as they started the patio/fence project in our backyard and there is a huge mountain of dirt – now may not be the ideal time to bathe anyone.   However, I still wanted to post a few photos. 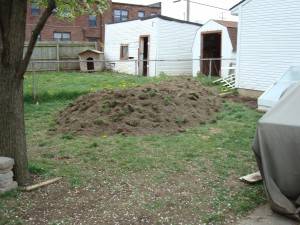 This is the pile of dirt. You can imagine how Louie and Pieka feel about this. Whiskey would not DREAM of getting dirty. 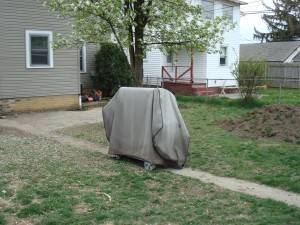 Our grill sitting in the middle of the yard and the big hole where the patio will be...soon, I hope. We're also replacing the walkway and adding some raised beds. In theory, it will look lovely. At the moment, though, I'm trying not to hyperventilate. 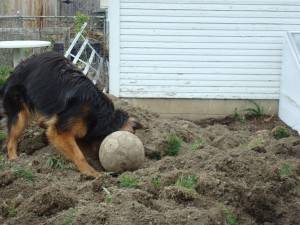 I am Queen of the Hill! And my soccer ball is filthy! 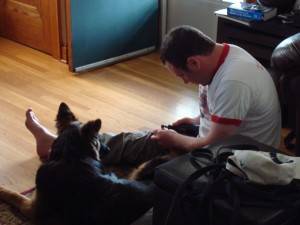 And finally, while it's a semi-crappy picture, I wanted to tell you all how proud I am of Shane. He decided that he should learn how to dremel Pieka's nails. The first attempt was...rocky...so I had him spend about 30 minutes just sitting on the floor, reinforcing her for lying down near him, playing some leave-it games, etc. Today's attempt was much better, he played "touch the feet" for awhile, then picked up the dremel. Look how relaxed her ears are! He, however, was probably sweating bullets while he used power tools on his darling girlie's feet.

Jaime, these are excellent photos! Queen of the Hill looks mighty clean considering that she is playing on a mountain of dirt.

Your last photo is the absolute best! It is quite obvious that Pieka trusts her Dad to give her a proper manicure! Great job Shane!

Don’t stress over the yard construction—it will be fabulous when it is finished!

What I always say about big projects is that it gets worse before it gets better.

Well, I think we’re officially into worse. 😉 It’s pouring. The hole is slowly filling with water and the mountain of dirt is a mountain of mud. My poor floors…..

OH MY GOSH this is doggie heaven! They will be so bummed when it is done. I love the last picture of your husband doing Pieka’s nails, that man is a keeper!

He is definitely a keeper! Pieka is a daddy’s girl. While I take her to classes and do most of the “training”, he’s doing a great job of staying consistent and making sure that Pieka will also work for him. This is the first dog where he has been involved from day one (Louie doesn’t count) and he is a very good dog dad.