Awhile ago, Julie and I were emailing about Pieka’s ear fluff.  A riveting topic, I know.  She suggested that I do a little trimming to give Pieka a cleaner look.  Well, I needed to clip Louie (the shih tzu mutt) today…so I got brave, slapped a medium guard on the clippers and went to work on Pieka.

You will likely all say “we can’t tell a difference.”  You would be shocked at the amount of hair that came off this morning.   She was surprisingly compliant.  I think she thought I was dremeling her ears.  She LOVES having her nails dremeled (who doesn’t like a pedicure?), so it was really no big deal. So, without further ado: 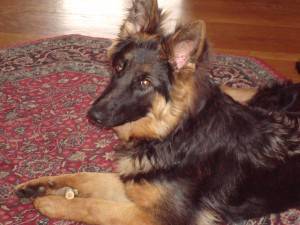 Before trimming. Note the super-fluff at the sides.

By the way, she’s chewing a deer antler in the above picture.  My dad collected, cleaned, and sawed them for me. 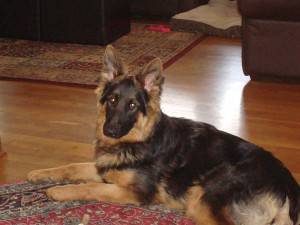 After trimming - can you tell a difference? She's still fluffy...but not AS fluffy. I think.

I know it’s a little rough.  See that dark patch on the right?  That stupid patch of hair will NOT brush smooth or trim…doesn’t matter how much I shave, it still sticks out. 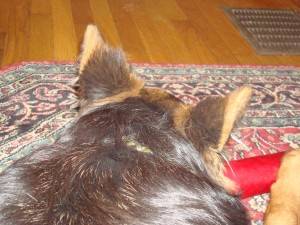 A close up of the back of her ears after trimming. I think it is hysterical how the fluff only starts 2 inches down - the tips of her ears are smooth and short. 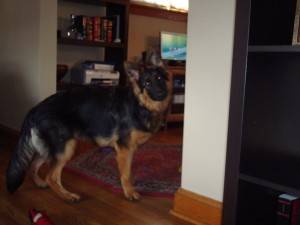 And a (too dark) profile shot, post-trimming. It may not be obvious from the pictures, but it does change the "balance" of her look a bit.

Later this week, I may get brave and do some more.  Should I?  We have class on Monday nights and I didn’t want to take a bald-eared puppy.  I’m trying to balance things – I want to clean her up, without shaving so much hair that she looks strange.  She’s got a lot of hair on the sides of her face and neck, I would almost have to trim the whole thing if I took too much off the ears and temples.

Pieka is now crashed for a nap.  Apparently getting your hair done really takes it out of a girl.

Julie was telling us that she thought that our Sabree’s hair would look alot like Pieka’s. She mentioned trimming Sabrees also, I’m just chicken to do it. The last thing I trimmed was our bush in the hedges which Al had already done but there was one or 2 sticking out!.. Long story short I trimmed those couple of branches and 1/4 of the bush came off. No Confidence here.It is amazing how much hair there really is when you get to trimming though.

Ha! Trust me, I suffer from similar fears. If you use a guard on the clippers, though, it’s hard to go too far astray. Pieka’s ears are a little choppy but not too bad.

You’re right on the amount of hair – it doesn’t look like much, but I shaved and shaved….

She looks great! Coke has a coat similar to a long coated shepherd but his ears are down. I started trimming and shaping them with a thinning shears (scissors).

Hmmm. Thinning shears, eh? Maybe I’ll get a pair. Shane says he can’t tell any difference. Guess I’ve got some more work to do!

I originally trimmed Coke’s with a regular scissors, I tried to be careful but it looked like a hack job. Then someone told me to try a thinning shears, which is a scissors but I guess it kind of trims different lengths at one time. I was told “you CANT mess up with thinning shears”. A groomer offered to give me an old pair so that is what I have been using. I mainly do his ears, but I also trim and thin out his “pants” (I don’t think this is a problem for coated shepherds) and the feathering on the backs of his front legs. I’m not sure if it really makes much difference but I like to fuss with him, hehe. I should find some pics…

Deer antlers, huh? Seems like a good idea. Lots of minerals and I’ve never seen one splinter. I wish I could find the shed antlers here on my property but the mice, coyotes, etc. always seem to find them and devour them first.

Pieka is so pretty. I like her name. What does it mean?

Why, thank you. We think she’s just gorgeous, ear fluff and all. Shane and I had a terrible time agreeing on a name. I ran across an article that explained a “pieka” (pee-ka) is the star on top of the christmas tree. We thought it fitting. She’s a very feminine girl.

Deer antlers are all the rage as chew toys. They don’t splinter at all, they last forever, and they don’t really smell. The boutique pet store in my area charges $20/piece for the things … ergo my request to have dad scour the countryside. He’s thinking of starting a cottage industry, I suspect. 😉

I love the name Pieka and it’s meaning, thanks. Perhaps Pieka’s fluffy look has to do with her being so feminine. Nice style job, she is a beauty. Julie H