I am attaching some photos for your viewing pleasure.

My naughty son was channeling his inner war-dog – can you believe the trench he dug!  Just kidding – he had some help from dad – Jack had to dig out the septic thing and Chief would not stay out of that hole!  Good thing the lid weighs a ton or he would have went for a very nasty swim.  The rest are pretty self-explanatory – Xmas pix of Chief and Jack.  The constant pestering of Jack for his coffee – no way though -not even for kisses.  I have said it before, but I will say it again – Chief ADORES Jack.  I often tell Jack he is Chief’s man-crush.  He just laughs.

Chief is doing quite well.  He is strong and smart and healthy.  He bounces when he walks.  He is the best watch dog.  He constantly checks out that window- if you say “who’s that?”  he flies to all the windows to check it out.  I think he sleeps with one eye open – he seems to never rest. Jack’s job now requires him to work second and sometimes third shift, and I cannot tell you how much safer I feel alone knowing I have him with me.

I tried a new thing with him about a month or so ago.  Since he was little, he could always retrieve an object that was visible, but I didn’t know about something not visible.  Well he has these balls he loves to play with in the living room, but they often roll out of sight under tables, etc. where he can’t reach.  I got sick of crawling around finding them for him, so for the hell of it I said, Chief, go find your ball.  I am not kidding, he went right to the coffee table, laid down, and pointed his nose toward it.  It was right there!  He has had no training in this, I don’t even know what you call it, but he can do it! 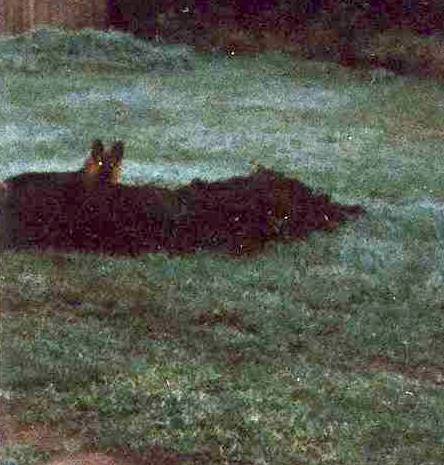 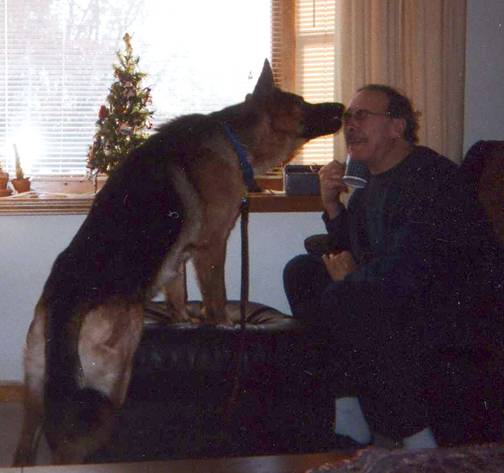 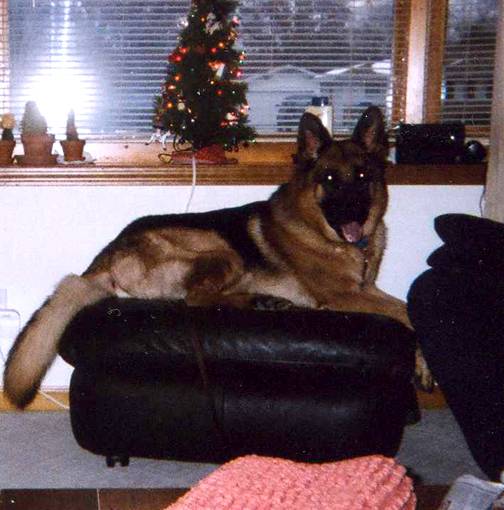 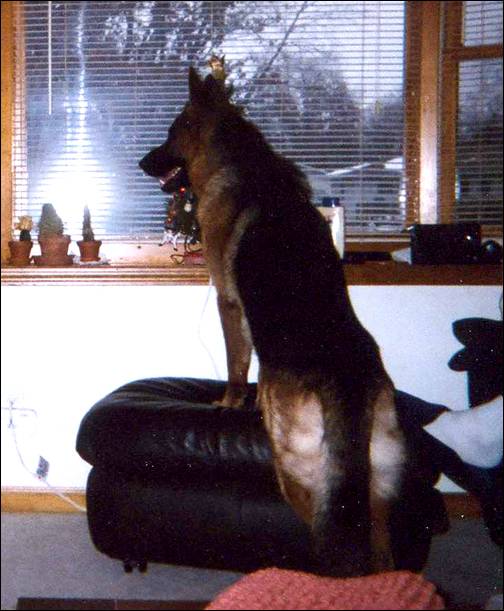 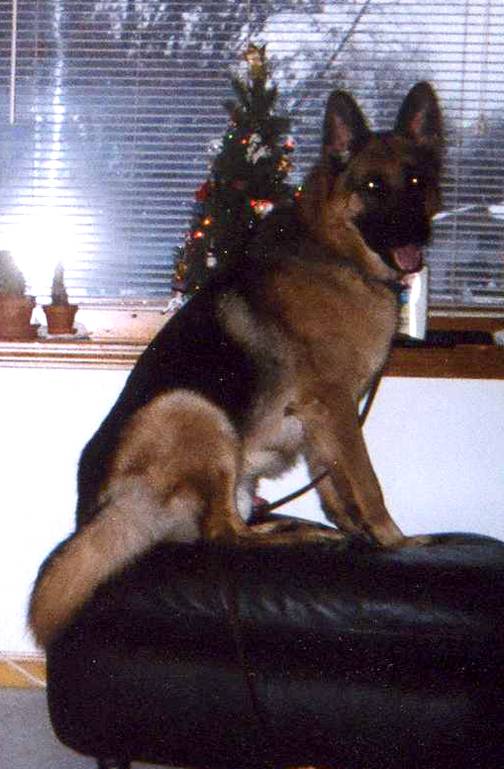 Chief is very handsome! The kissy picture is very cute.

The picture of Chief’s head sticking out from the “hole” in the ground is hilarious!

I forgot all about these Xmas pix.
He would NOT stay out of that hole.
Too funny! It looks kind of spooky, doesn’t it – his little disembodied head sticking out of the hole?

Kimberly, Chief is very handsome. I wish that Kayla had some of her big brother’s pants!

Is Chief licking Jack’s glasses, or trying to steal them from his face? That will be his next trick!

Carole- He is trying to get Jack’s coffee – it is a never ending endeavor on his part – I think he is kissing him just as a distraction to move in on the coffee. He is very clever that way. I was telling Julie his new thing is to hit the coffee cup with his nose in an attempt to spill the coffee, then lick it off Jack’s shirt. It has happened too many times to be an accident.

What do you mean by his pants for Kayla – like butt fur? How is the lovely one doing?

Oh yes—now I see the coffee cup! How very clever indeed! Kayla has tried neck-stretching, nose-bumping and just plain-old-counter-surfing to steal a lick of coffee. There is no way that she needs coffee.

Yep, Kayla needs Chief’s butt fur, plus bushy tail and the rest of his nice coat. Even when she is in full coat, Julie asks, “Where’s her coat?”

The lovely one is doing quite well—thank you for asking. I have recently started exercising Kayla from a bike! It is quite scary at times.

You mean you ride a bike and she runs alongside of you on a leash? If so, that does sound scary…

Not to drone on about this regional thing again, but perhaps the coat thing is just that she doesn’t need all that fur in Florida? Years ago we had a very furry cat that had a lot of butt fur, we called it her pantaloons (spelling?) Your comment reminded me of her.
Your blue eyed cat is absolutely beautiful by the way. We are dog people now (too hard to have both (for us) and we like dogs better).

I have also really been enjoying your wildlife photos, like the armadillo, I think
of them like more in Texas and the southwest, not Florida. Now I know…

Can’t believe the lovely one turned one already.
take care….

Yes, Kimberly—that is exactly what I mean. I ride a bike and Kayla trots alongside. It is the “alongside” part that she doesn’t always manage. Kayla has a tendency to want to pull ahead. It sometimes feels like “Mr. Toad’s Wild Ride” compared to when I used to do this with my American GSDs.

The coat issue really is a regional thing. How much coat could one possibly need when you live in a climate that only has a few weeks of cooler weather?

I’m happy you’ve enjoyed the photos of my neighbors—more should be returning now that the weather is getting warmer.

Yes, the lovely one has turned one already. However, I must say that is not the name I call her when we are biking! 🙂