Sunday, February 15, we went to the KY Horse Park in Lexington, KY for a tracking test. Ostara had been in one tracking test previously- at this same site one year ago, where we failed. Her tracking was somewhat weak at the time so I opted not to push for the title in 2008 and let her grow up a bit more before trying again. Ostara went back to co-owner Julie for several months but I borrowed her for a couple of weeks in November to work on tracking and she did very well and we were able to certify. I was very pleased with the tracking she was doing- clearly maturity was helping. So I entered her in a couple of tracking tests, both in February and both in KY. She was lucky and drew into both tests. Going down to Lexington on Saturday I felt confident in our ability to pass, and I could see us getting track #1 (just a daydream). Sure enough, when we did the draw we got the first track. We drove to the fields and I saw flags in the same field where my Podengo has passed the year before and I thought- “cool! we get to work on the same field that Jolena passed on!”. It turns out that was track #2. they took me back over a hill to track 1 and it was the same field that Ostara and I had failed on the year before. I was dejected briefly, but then thought about Ostara and how far she had come in the last year. No stupid thoughts of failure were going to stop us! Of course it didn’t hurt when I saw the placement of the flags and realized there was no way the track was laid out the same as last year.

Ostara tracked up to the start flag and I put her harness on, then for a few moments she wouldn’t move (oh no- not that again. Early on I had to shove her to start her). It seemed like a long time to me, but it probably was only a second, but she started, wandered briefly, then settled in to track well. 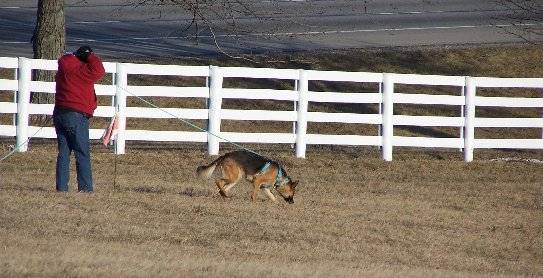 She tracked confidently up to the first turn and took a left with purpose. I followed happily along. 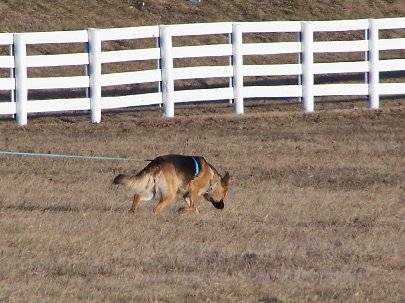 Then a no-brainer right turn. I knew the next turn would also be a right turn (layout of the field required it), but I didn’t know where. Ostara indicated a turn before I expected it, but she seemed confident of it, so along I went.

We had three turns and theoretically the glove could be anywhere now, but we were in the middle of nowhere so I figured we had at least one more turn to go- sure enough she indicated another right but wasn’t holding the line very well so I waited. 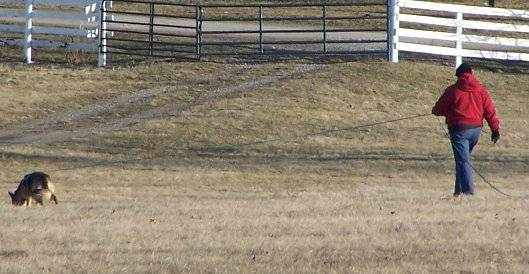 She soon settled in and pulled me along on turn 4. Then I saw something ahead of us, right on the path Ostara was on and I thought “it’s the glove!” I was very surprised when she stopped about 10 feet before the object I saw, and indicated an article. I checked and it was a brown glove, blending right into the ground color. Good thing she has good article indication, because I was after the other thing—which turned out to be trash. 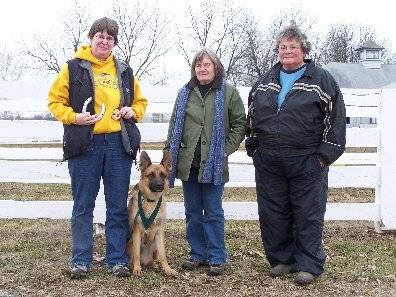 I was really pleased with Ostara’s work. This was the best tracking she had ever done and she never once had a problem with the gallery or judges.

Next on our agenda is finishing up that RA title, we need one leg, then Ostara gets to try out motherhood. I think she’ll make a good momma.

Great job, girls! I enjoyed reading the post as well as the photos. You made me feel like I was right there on the sidelines, holding my breath at every turn, until, finally, victory! Yeah! Is that an award medal hanging on a ribbon around Ostara’s neck? I don’t think it’s her harness cuz that is light blue, isn’t it? You are holding a sterling silver horseshoe and gold medal, right? Very nice mementos of a fabulous day.

yep- that medallion was the club’s award for the TD. the horseshoe was used for the draw- her #1 for the track number was underneath it. Both the medallion and horseshoe are going to Julie to display in her training barn (or wherever she wants to put them). I couldn’t find the glove at the time the pictures were taken (it was in my warmer jacket- not lost).

Wonderful news and wonderful post! Pieka and I are just getting started in tracking – I hope we have similar news to share one day!

Cool! I need some tracking lessons from you!

You and Nikon need to learn Schutzhund tracking first, if you start with AKC tracking you will have a hard time with the other. You could start Chopper with Charlene. Actually, I think Charlene has worked her in tracking already!??!

I did start her, but it was only working on article indication. she didn’t actually get to do any real tracking before we ran out of time (a week goes by awfully fast).

I track alone and have had some success with coaching others on how to work alone. I’d be happy to help you with Chopper if you want (but you do need to drive to Kzoo every now and then so I can see how you are doing)

Congratulations Charlene!!! I loved reading the details of the track.

Bravo! Great job and congratulations O’Stara & Charlene!! I just have one slight complaint—I did not want this story to end! Your detail of the track and photos are perfect. Thank you, Charlene! O’Stara looks to be in great shape.