Gabe and the Squirrel

I just thought I would convey a little story. Gabriel (Rosie son) is too big to be fast enough to chase down a squirrel, they are as big as cats here–black walnut trees abound in the neighborhood.

So, it seems that Gabe has figured out that he will never catch one by charging after one. I started to notice that Gabe seemed to be studying the squirrels. He would just be sitting in the snow watching them from some distance; he had stopped barking at them and stopped charging at them. He would watch them utterly motionless for long periods of time.

The squirrels mostly stay on the other side of the fence but they also pop through the fence and come into the yard a foot or two–after the walnuts that have fallen over on this side. But they only come over very very briefly and then shoot back through the fence. So, Gabe would be watching them intently and even if they popped into our yard he would not bark nor would he charge at them. He would just watch–studying them it seemed. And it was astounding to see him control his most powerful instinct–to give chase, which is what he has been doing for the last four years.

Then I saw him yesterday standing parallel to the fence only about one foot away from it. The squirrels were on the other side about 20 feet up the fence line popping through and going back to their side. And he stood frozen like that–fixed–staring at them for a very very long time. My wife said: “What’s Gabe doing?” And I said: “I think that he is planning an ambush. At some point the squirrel is going pop over where he is standing and then chomp.” She said: “Really?”

We were both amazed at his ability to concentrate and to resist his natural impulses. And we were amazed that he solved the problem–learned from experience.

Well, it didn’t take very long; he got a squirrel this morning. Of course, we would prefer it if no squirrels got killed, but we were amazed at his intelligence. And his determination to guard his yard.

He is 90 lbs and is very very muscled–hard as a rock and very lean. He and our Basenji put in 8 hour days playing outside–they have about an acre fenced in. He and the Basenji are the best of pals. She is two years older than him and so he grew up with her.
He is very protective of her and she lavishes affection on him. He has had zero medical problems. He is very smart and very very affectionate. And he is handsome. He is a sweet angel boy and we all love him very much.

I know the time and dedication it takes to breed good dogs and so thanks again, thanks very much. Gabe has brought us so much joy.
We are very proud of him. He hasn’t caused us a moments anxiety. 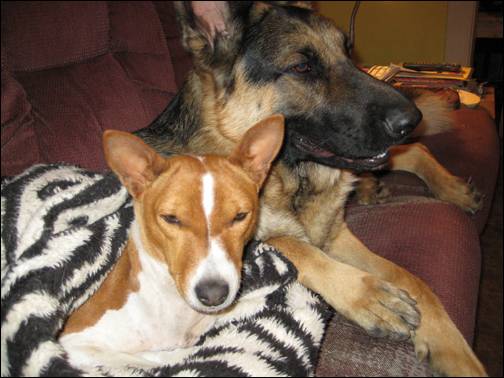 Terence, this is a great story! German Shepherd Dogs are very intelligent—add that Alta-Tollhaus prefix and the intelligence is even kicked up another notch.

Lana did a great job at raising Gabe, and now he can look after her. Thank you for sharing.

Is Gabe an Ekko(Rosie/Esko) brother? That story sound just like an Ekko one, he’s always reasoning out how to do something or another. He hasn’t caught a squirrel yet in spite of his many varied techniques, but he has perfected opening doors, catching snowballs, sledding, and hiding toys so he can play “find it” with his humans, which are all fun games for him.

Ekko’s somewhat bigger and is a very trim 115 pounds, but wow, he looks a lot like Gabe.

Garth, you are good! Gabe is a Rosie son!