When checking the police log at work this morning there was a case stating that last night a gentleman reported that two dogs ran across the road in front of his car and that he hit the German Shepherd Dog. Both dogs took off and he could not locate them. Later someone came to the Police Station with a found Boston Terrier. The owners of the Boston Terrier were located and reported that their German Shepherd was still missing. The dogs had escaped from a fenced yard. After reading the case I called the dog owner to see if the German Shepherd had been located. She said that she and her son looked all night but did not find the dog, a 2 year old sable male German Shepherd Dog named “Bosco”.

I went to the area and started looking for “Bosco”. I knew that the dog had been hit by a car so I started to search the area on foot. As I was searching a lady from a nearby house came running down the road towards me. She was aware that a dog had been hit by a car and said to me “You might think I’m crazy but my dog was acting differently this morning and sniffing into the woods”. I went to her house and she brought her Golden Retriever, “Andy,” outside. The dog began to air scent right away towards a section of the woods. She put “Andy” back in the house and she, her husband and I searched as far as we could into the woods but there was no sign of the dog. They went home and I continued to look for “Bosco”. I went further down the road and then returned to where “Andy” had alerted. I went deeper into the thick brush this time and suddenly saw a slight movement. I crouched down and then saw the dog about 15 feet in front of me. The dog was laying down just looking at me. I called his name but he did not move. Not wanting to scare him and cause him to run off, I called his owners, told them where I was and asked them to come as soon as they could. When they arrived and called his name “Bosco” got up and came out of the woods. He was so happy to see them. It was quite an emotional scene. “Bosco” had cuts on his rear leg but otherwise appeared fine. The owners took him to their veterinarian for treatment and a complete check up.

“Bosco” was reunited with his family because of people doing the right thing. The driver reported that he hit a dog, a person found a dog and brought it to the Police Station, “Andy” acted differently this morning and his owner told me about it. If it was not for all of this “Bosco” may not have been found at all. 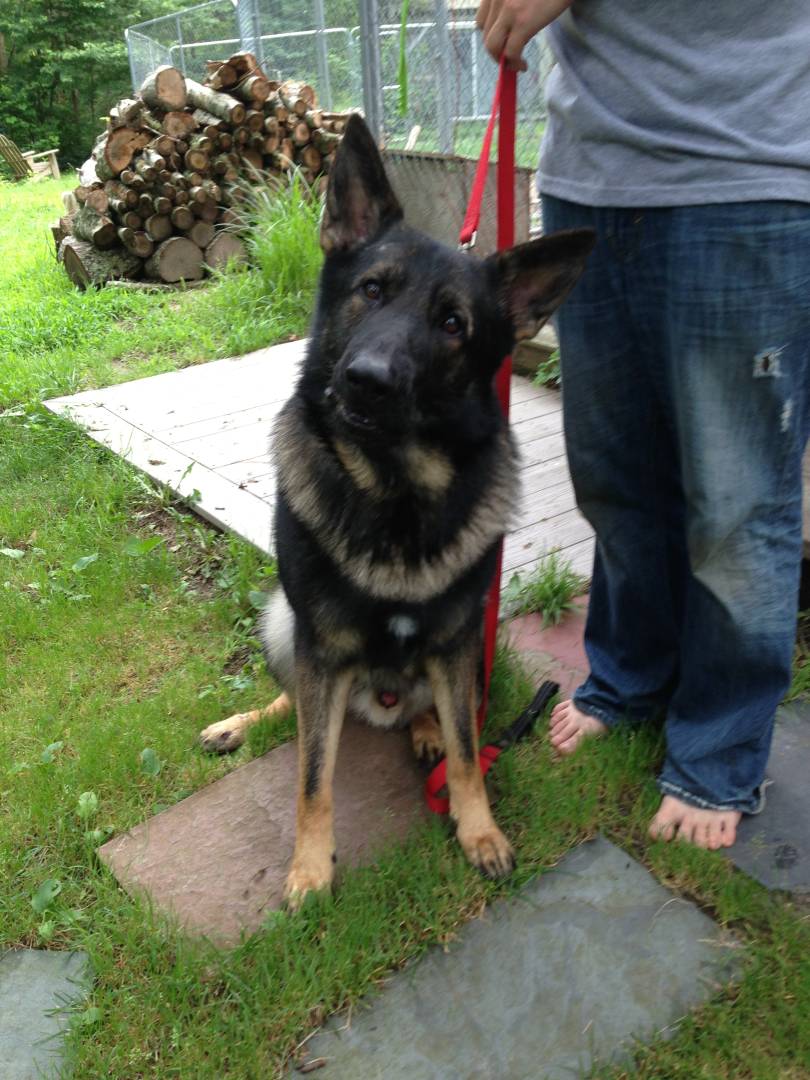 From Detroit to Harwich

And you, Lynda, took the time to look for him and call the owners. I’m sure that the owners were happy that you spent the extra time looking for him. Without you, he wouldn’t have been found! 🙂

Thank you Lynda for the happy ending, in this and all the work you do.
Bosco is a lucky boy to be safe and sound with his family.

What a heartwarming story and such a happy ending. It’s wonderful when people do the right thing and go above and beyond. Hats off to you Lynda for not giving up on Bosco.

This very easily could have had a tragic ending, but everyone involved did their part to help find Bosco. Way to go Lynda.

OH LYNDA! That made me cry in a happy way. Thank God for you and your kind soul!!!!

Your dedication paid off Lynda! Congratulations on finding Bosco. You must have been filled with emotion; I know I was when I read your post. 🙂

Lynda, that is a wonderful story! He is a very good looking dog. I can just imagine this would be quite emotional for you; you must have felt truly wonderful to have found him and returned him to his family. Little did Andy’s owner know that you would never think she was crazy for knowing and tuning in to her dog. 🙂

Lynda is pretty amazing, yes? I am so happy that this story ended with a reunion.

Bosco was lucky that you crossed his path, Lynda. 🙂