Road trip with Via

Via and I went along with a friend, Lisa, and her 6 year old daughter, the Kid Squid, to visit Julie Richards-Mostosky, at Alta-Tollhaus German Shepherds in Marshall, Michigan. They went to pick up a puppy while Via and I were slumming.

The drive each way is about 12 hours. We drove down in a day, spent a day and drove back in a day. It was a quick turn around and we packed a lot in to the short visit.

Via did great. On the way we stopped in Illinois so that Via (and the kid) could spend about 30 minutes running around. 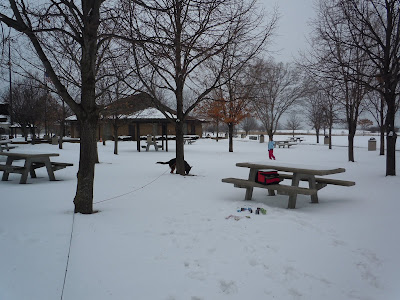 When we arrived, the child climbed into a pool with a litter of 4 week old puppies. 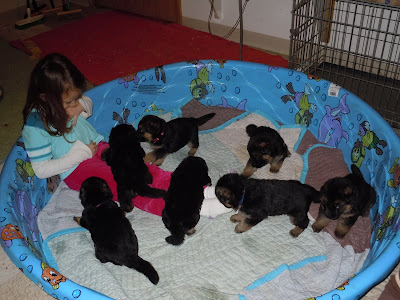 Ms. Via played in the front yard. 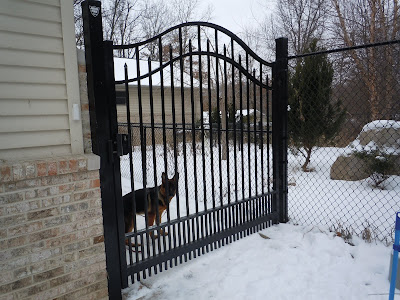 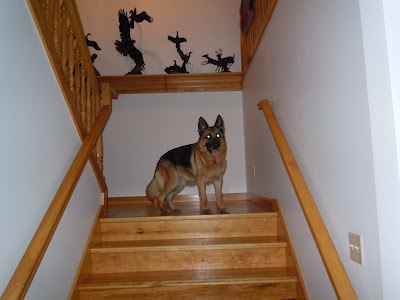 I put a bowl in the shower to keep Via from flinging it and all the water around our bedroom. She wasn’t bothered at all by the odd placement. 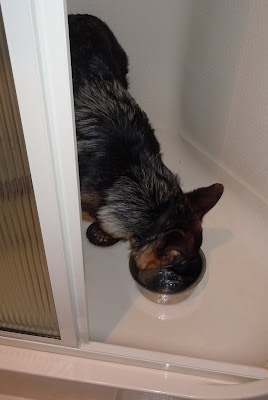 It was a long day. Ms. Via asked politely to join me in bed for a cuddle. However, as she was more interested in dancing on my head than sleeping, she finished the night in a borrowed crate. 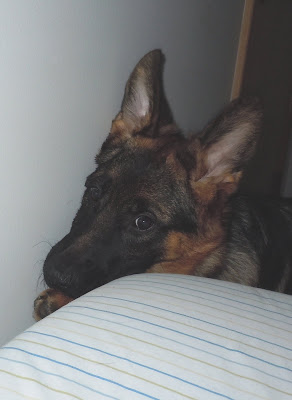 My friend and I tested 8 week old puppies. 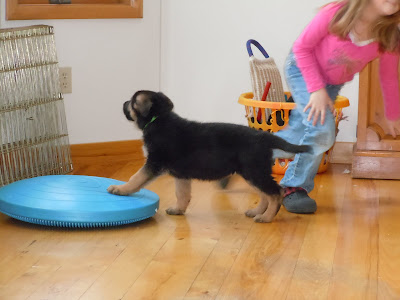 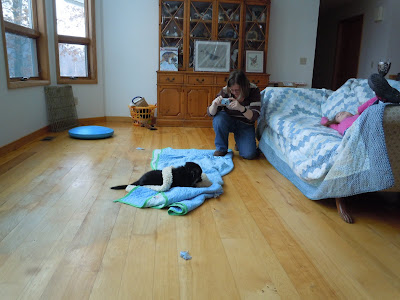 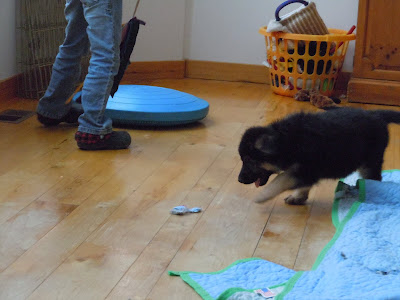 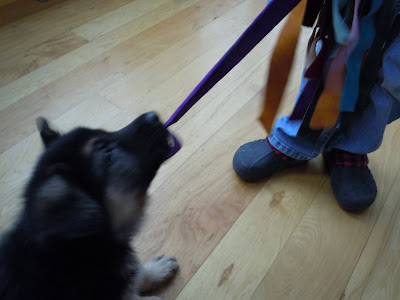 Via and I took a hike on Julie’s many acres. 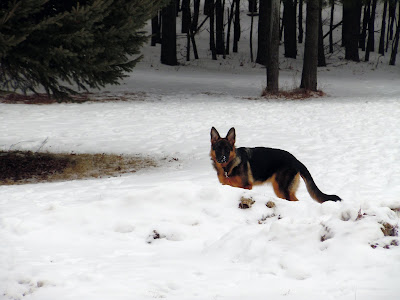 Via had her hips and elbows x-rayed for an Orthopedic Foundation for Animals (OFA) preliminary view by Julie’s husband, Dr. “Mos” U.V. Mostosky and her daughter Tiffany Mostosky. They have a clinic right on the property attached to Julie’s training center, Taking the Lead. 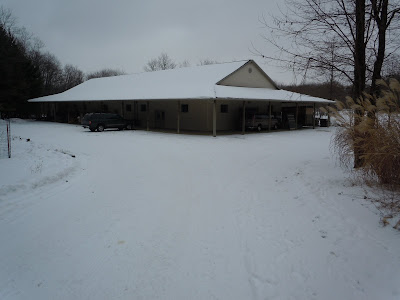 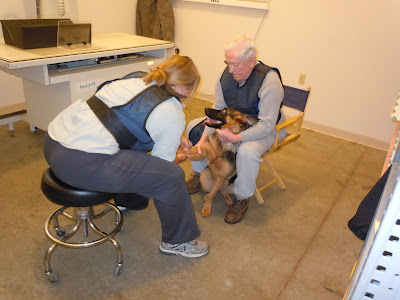 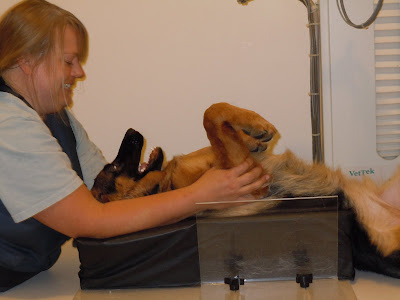 “Could not be better,” he said, pointing out the deep sockets and tight fit. 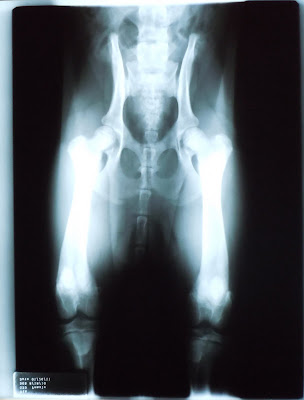 Lisa asked the value of doing a preliminary. I want early knowledge of the hip status on a puppy to plan the dog’s future jobs and training. Mos did Blue’s for me when she was 4 months old and he was still at the University.

Preliminary hip evaluations are as valuable to me as the final OFA evaluation. The OFA accepts preliminary consultation radiographs on puppies as young as 4 months of age for evaluation of hip conformation but I will not be sending mine in. 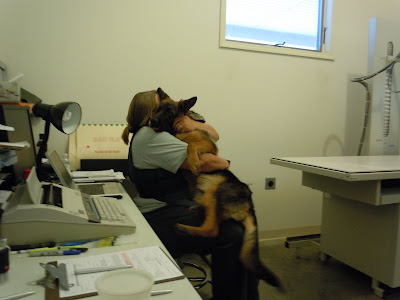 While Via was sleeping off the tranquilizers used to get her in the mood for the x-rays, Lisa and I went to see Gustavo Sanchez of Lansing MI, a schutzhund trainer work his dogs. I was too busy taking notes, which will be a different post, to make any photos. I will say that I was in AWE. Addicting, is how Lisa described the experience. Here are photo’s of Gustavo working with two of Via’s litter mates earlier in the week. Via and I will be returning to in March to spend a week working with Gustavo.

I returned home to nap the afternoon away with Via. 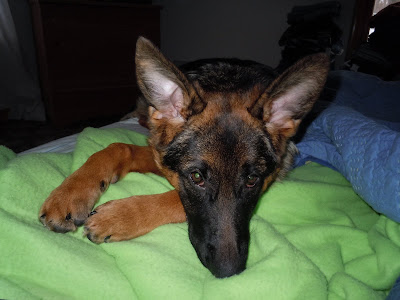 Monica and Funny came to hang out with us which woke Via. 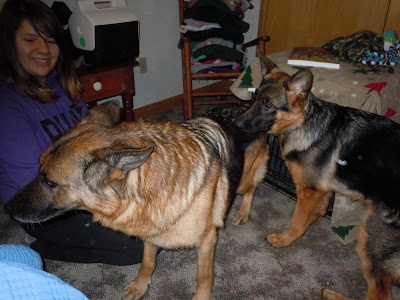 Funny seemed to enjoy teaching her grand child to share by stealing Via’s favorite bone out of Via’s crate and chewing it on Via’s favorite mat. She later gave Via a lesson about sharing bread, a toy and a container of leftovers. Funny never had to do more than look at Via for Via to back up and say, “Whatever you say, Ma’am.” 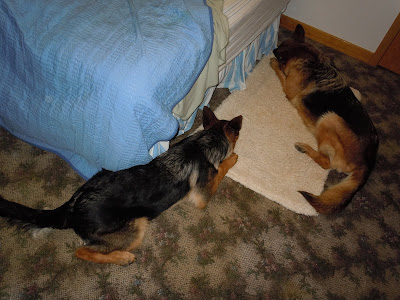 I stayed up late chatting with Julie and doing dog chores. I would have liked to stay for year or so.

Watching Funny interact with Via and spending time with Julie were the highlights of the trip.

The drive home the next day was long yet uneventful – except that Paige, who joined us for the return trip, is quite the crate singer. 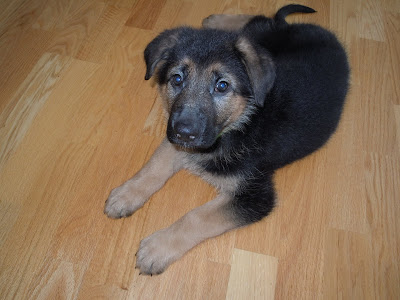 Sounds like everyone had fun. I am glad you got to see Gustavo work the dogs, he is very talented, and a natural with these dogs!
Who better to take lessons from than the queen herself, Funny!
I am sure your friend will enjoy her puppy and maybe Via will be a roll model for paige.
I wish I would have gotten to see you again, I imagine Via is a very sweet girl.

Karen, Paige is very sweet, Via…not as much, Ok she is sweet, but in a different way.

Josie, do you see a picture of the Q-litter!

Robin, thank you for the pictures of Mos and Tiffany. I have no pictures of the two of them working together.

It was so much fun having you and Lisa visit.

Yes Julie, thank you thank you!! I have my heart set on one of them from the moment he was born, but we shall see if he’ll pick us as well when we see you guys.

I sincerely appreciate you taking the time and posting the pics. Love them all!!

Great road trip! You couldn’t find anyone better than Mos & Tiffany to do xrays.

I really liked Via’s expression in the picture under:

“It was a long day. Ms. Via asked politely to join me in bed for a cuddle. However, as she was more interested in dancing on my head than sleeping, she finished the night in a borrowed crate.”

Via looks like she’s having way too much fun on that x-ray table!

I need to make an appointment soon w/ Mos and Tiffany…

It certainly sounds like a fun trip and very successful too. I was really interested in your post and photographs. If it had been in a book, it would have been quite a page turner.

Robin can you please come back. Natasha wants to play with Via again! They were so cute together.