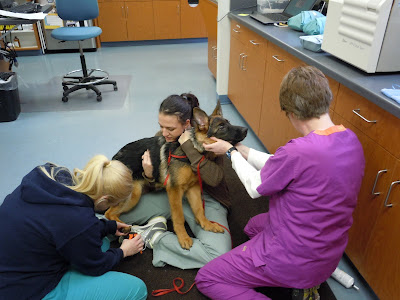 Via had an appointment at the Lake Harriet Veterinary Clinic for her Distemper shot today. She greeted all of the staff except one without jumping on them. Her victim was just returning from lunch. Via jumped on her and stole her mitten right off of her hand but traded it right back for a piece of freeze dried lamb lung which charmed the tech.

After trying to find a magazine that was to her taste, Via was able to (mostly) relax in a down in the lobby before our appointment. It is a BAD idea to put magazines on the bottom shelves of a book case where bored GSD puppies are required to hang out. I’m just saying.

The silly girl would not step on the scale, not for ham, lamb lung or to save my embarrassment. I am a DOG TRAINER for gosh sake. She wouldn’t do it when we were there three weeks ago either. I remember making a note back then that we needed to stop in and train on THAT scale. We’ve trained on three different vet’s scales much closer to home but not THAT vet’s scale which has a black deck. I had to pick her 47 pound moose butt up and place her on it – and insist that she stay. After my insisting by three times picking her up and placing her back on the scale, she seemed to say, “Well, if you insist!”

Besides the black scale thing, I discovered two holes in my handling training – temp taking and being restrained by someone other than me. Sigh.

She was NOT pleased to have her temperature rectally taken. She kept trying to turn around to see what the tech was doing back there which would dislodge the thermometer which would start the process over again which would cause the dog to turn around which would….Well you get the idea. I think Via was offended when she heard another vet tech say that it was the same instrument that is used on cats. We’ve only worked on temp taking a couple of times and THOSE where back when Via was small enough for me to do it alone. Now that Vee is a big dog, I’ll need a small army, a clicker and the VERY BEST TREATS.

I got the vet tech to trim her nails as I wanted Via to have them done by someone other than me. She did not mind the nail trimming per say. I have one dog, Blue, who believes that the nail clippers are evil incarnate and out to eat a dog. I refuse to let this dog have that opinion. Via and I work on THAT bit of handling a lot.

At home Vee is content to lay on her side, eat treats and have a pedicure. I do a paw at a sitting and just clip a bit off the top.

Today Via worry seemed to be around being restrained by someone other than me. One tech held her, another trimmed her nails and a third alternated between spraying peanut butter in to her mouth and singing to her. She yawned, panted, held her breath and left sweaty paw prints. By the third foot she spit out the peanut butter. When she was released she did a full body “wet dog” shake like she just came inside out of a pouring rain.

When we returned to the lobby, she was able to take low value treats and offered a relaxed down while we waited for our bill.

The moose goes back in March for her final well puppy check up so I have to get to work on the temp taking, the black decked scale and the restraint thing. I wonder which students I can sucker, err, recruit to brave Via’s needle teeth to practice restraints?

Sounds like quite an adventure. I don’t understand the problem with that particular scale. I teach my dogs to relax and allowed to be restrained by me, but not others. I can see the benefits of teaching it, but I am not sure if it is worth the effort. I am referring to extensive restraint as opposed to say a restraint by holding a dog back for a recall or such. All other times would greater restraint is needed I am their to do the restraining and because of the trust my dogs have in me, it is never an issue….which may be my point. Is it fair to expect a GSD to give that level of trust to a stranger? Good topic of discussion.

I don’t get it either. She didn’t seem worried about it at all. Just uninterested in stepping up on it. And I don’t have a cue for it yet, the stepping up part. She was actually pretty funny. I’d put her on and she’d leap sideways off and stand in front of me wagging her tail.

It is the only one that she has been on that has a black deck which is an effort to make the thing more dog friendly. You’d think she’d worry about the cold, slick, stainless steal ones. Go figure.

I plan to go back during a quiet time at the clinic to play 101 things to do black decked scale and / or cut a black mat to fit the scale at the vet around the corner from my house. The vet clinics near me are AWFUL for animal care but very handy for training.

Well, she is very true to the standard. “The German Shepherd breed has a distinct personality marked by …. a certain aloofness that does not lend itself to immediate and indiscriminate friendships.”

One of my students suggested that if something happen that Via ended up at the vet with out me, it would be better for Via’s mental health if she was used to extensive and rude restraint by someone other than me. I am not looking for trust exactly, just less stress for Via. I would like her to think maybe, “Oh yeah. This is the game there I got held and fed.”

I wouldn’t use true strangers for training. She’s met and played with all of my students and assistants. And I might pay for 15 minutes of vet tech time a for a few training at the Vet clinic so that at least those folks won’t be strangers.

Via is fine with being restrained for recalls. She even handles be handing her leash to a student while I leave the room. My students take her out for bathroom breaks.

I agree Julie, though maybe it will come back and bite me someday since so far none of my dogs have really needed to be restrained by anyone other than me (they are fine for grooming, love the vet, I trim the nails weekly and don’t restrain them for it, I can pill them, lie them down the way Julie taught me, etc). Most of the socialization I do with regard to people is showing the dog that people are neutral. So far I haven’t had any GSDs that were spooks at all, if anything I need them to understand that we can’t run and jump on every person. People are just “there”, no something we concern ourselves with one way or the other. I do let people touch and pet if they ask and the dogs all love this, but I find as they age they become more aloof and naturally neutral to strangers, always deferring to me. If Nikon’s sitting in a circle of people feeding him and I step back and walk away, unless I tell him to stay he will get up and follow without being called even though the others have his treats.

At the vet I try to just be neutral and not make a big deal. I’m not really overly positive about it either. I just walk in like we’re walking around the block and keep it as neutral and “normal” as possible. Nikon, CHop, and Pan all have high drive for food (and Nikon even higher for toys) so most things I would use for a motivator or reward in training context I don’t bring to the vet because it just makes them hyper and I don’t want them to be hyper if they happen to get anxious at the same time, especially Nikon who likes to vocalize everything! I do let the vet give a piece of jerky at the end of the exam.

Coke is an absolutely baby when it comes to any level of pain, and unfortunately he’s the one that gets terrible hotspots b/c of his coat, but we have a system of me restraining him and Phil trimming. I also take him to the vet to be shaved and they always laugh b/c he yelps before the shaver touches his skin and then is OK. Afterward he still loves the vet and doesn’t want to leave. He has a lower spook/sensitivity threshold than all my GSDs but he recovers right away. The GSDs tend to have a much higher threshold for pain or showing any sort of reaction or avoidance, but will be more discerning overall and don’t recover as quickly if the line is crossed. Chopper is the extreme as far as my dogs go, she has a very high threshold for pain or getting spooked. My vets think I’m crazy b/c I never take just one dog to the vet, we always make it a socialization outing. They are used to nervy GSDs that have to be muzzled and forcibly restrained just for a routine exam 🙁

As far as handling in training I don’t let anyone handle my dogs, but I am a control freak. At our training place we don’t usually do those “musical dog” exercises where you take turns with each others’ dog. One time we did a tether exercise where we tethered the dogs and then walked around giving treats. I let Pan do this one b/c he is young and we weren’t really doing any skills, just getting the dogs accustomed to the tethers in the building. I think it depends on the dog though. Coke responds to anyone about the same. The GSDs will just stare at you like “who do you think you are?”

I like restrained recalls but kind of the point is for the dog to be a bit stressed and want to get back to you so that’s a fine exercise. If your dog gets kissy face with the other person and doesn’t listen then you know there’s a problem.