On Saturday we got to the trial site at 7:45am to set up and be ready for the 8:30am briefing. Aiden’s first class of the day was Novice A Exterior. He finally got his turn at 11:45am. Aiden qualified for his 2nd Novice A Exterior leg. Jack was allowed to go outside just before I started my run to video tape.  Unfortunately, as he obviously did not know where the “hide” was, the trash barrel is blocking Jack’s view of the hide. That area is also in the shadows so is hard to see on the video. Aiden spends a lot of time there on his first “lap” around but did not stop and indicate the “find”. The second time around he does and I called “Alert” and Aiden was correct!

Aiden’s second class was Novice A Containers. He gets right to work. In the video you can see him stop at the 5th box briefly, look at me, and then he goes on to check the other boxes. Aiden is a very methodical worker. After checking all of the remaining boxes he goes back to the 5th box again and drops into a down with his paw on the box indicating the odor is in that box. I called “Alert” and Aiden was correct! What a good boy. That was his 3rd leg in Novice A Containers so he earned his AKC Scent Work Container Novice Title. (SCN).

The last class of the day that Aiden was entered in was Novice A Interior. This search was located in a very small upstairs kitchen and no spectators were allowed, therefore no video. Aiden got right to work and searched along the kitchen cabinets and stove area. Then he went to the small table with two chairs crammed against the half wall near the stairs. He indicated on the underside of the back of the chair and I called “Alert”. The judge said “No”. I was surprised and she told me that Aiden had indicated 9″ from the odor and the rules say no more than 6″. Fair enough. I was, of course, very disappointed. After the class was over I found out that nearly all the dogs were disqualified for indicating in the same spot as Aiden. It was a very tight area for the dogs to get into and in speaking with handlers very experienced in other venues the general opinion was that this “hide” was too difficult for Novice Dogs.

Sunday was the second day of the GBKC Scent Work Trial.

Aiden’s first class of the day was Novice A Exterior. He went right to work and towards what I later found out was the odor however he got distracted on another scent on the tar mac and wandered off before indicating the odor to me. He eventually got back to work and hit on the odor. I called Alert and Aiden was correct. This was Aiden’s 3rd Novice A Exterior leg for his Scent Work Exterior Novice Title (SEN).

The next class was Novice A Interior. This class was held in the same upstairs area as yesterday and Jack was not allowed to come upstairs to video tape. Aiden did a good job and indicated the hide correctly. This was his third leg in Novice Interior also for his Scentwork Interior Novice Title (SIN)

As Aiden had earned his Novice Container Title on Saturday we decided to move him up into Advanced Containers. In this class there are 15 containers of various sizes and types and two hides which can be two different odors (Birch and Anise). There is also a container with a non food distraction such as a tennis ball or toy. In Aiden’s class there were boxes, paint cans, back packs, suit cases and a picnic basket. Aiden went right to work and indicated on a box and was correct. I then told him to “find another” and he alerted on a backpack. That was correct also. As this was my first time in Advanced, and I was so happy Aiden was correct, I forgot I was supposed to say “Finish” after the second “Alert”. This is not a requirement in Novice. The time does not stop until the handler says “finish”. Thank goodness I remembered and fortunately it only cost us a few seconds.

There was quite a gap in-between the Aiden’s Novice Interior class and his Advanced Container class so we took pictures with his 4 qualifying ribbons and 3 new title ribbons. 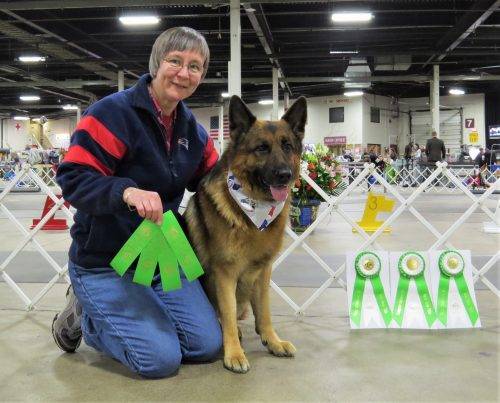 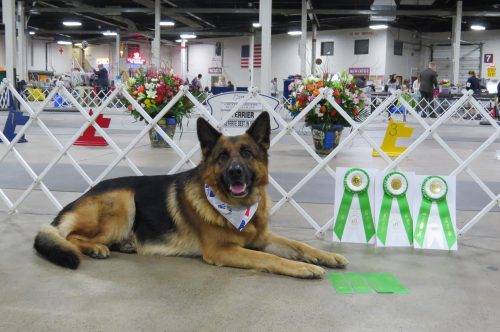 Aiden and I have a lot to learn in this sport and we continue to grow as a team.