Ziva did her 3rd regulation type practice TDX track yesterday.  The map and Ruth’s notes are below. There were 9 turns and it was 1100 yards.  A real TDX would have 5-7 turns and be 800-1000 yards.  She ran the entire thing in 28 minutes!  Ruth (my instructor, who by the way just got her AKC Provisional Judging Certification for tracking_YEA!!!!)  wanted to throw many elements at her and see how she (or more likely me) handled it.  The track was totally blind for me and elements included:

In element #7 she came across some fire weed.  She tried to avoid the plants by stepping to avoid, but it wasn’t working for her so she started casting around it.  It took her a while to figure out but, according to Ruth, she started to follow the track from a distance and got directly back on track after assuring herself she had passed by the fire weed.
Her head disappeared into the earth up to her shoulders at one point-she had found a big ole woodchuck hole and had to investigate.  After a brief exam she put herself right back to work-what a good girl!!!
I am getting so that I can see the “nasal fatigue” so I can keep her tissues hydrated and in good shape to track. I stopped to water her 6 times on this track.
We did a long diagonal road crossing because I think what she does is pick up the track on the other side of the road rather than follow the track across.  In TDX it is more or less directly across the road and we could probably get away with it, but for VST(the next level) at least 1/3 of the track would be on hard surface (think parking lot or parking garage), so may as well start off now.  Ruth took bacon and scrunched it into the road along the path to help her.  When we got to the long diagonal stretch she went to the other side and tried to pick up the scent.  when that failed she came back to where she last had the track and followed it back to the road side.  Ruth said we want her to be successful and build confidence at this stage for road crossings , so we helped her find the path using her nose (she was trying to pick up the bacon bits mashed into the pavement).  She has seen many dogs learn to stress over this because they were not given the chance to be successful when starting to train this.
All in all she did a wonderful job.  She found and indicated the 2 articles on the track.  She was,  if you can believe it would ever happen to Z-Evil one, a tired girl by the end of the track, but she kept at it.
She is very thoughtful and thorough (Ruth’s observation ) when she is evaluating were the track goes and keeps herself focused on the task at hand. 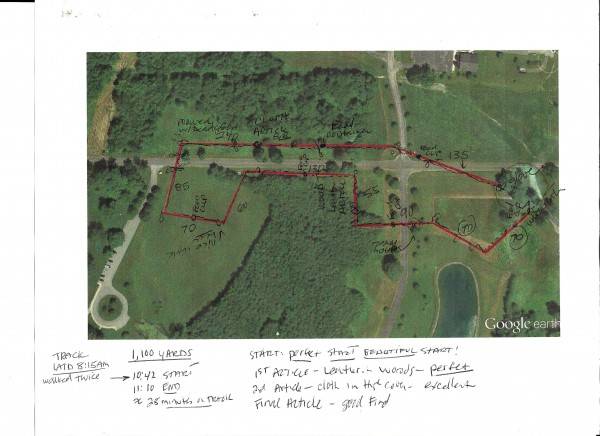 Back when I was tracking a lot we didn’t have google maps, it looks so helpful! I think you are going to nail this! Good work! Thank you for sharing your tracking notes with us.

It is really useful to mark your distances. You still need to know the area. It is nice to see it for real though after you have run it.

Good work again Lisa and Ziva.
Let us know when and where you will be trying for your TDX.

I entered 2 tests today. 1 in New York and 1 in Mass. Will let you know where hopefully I will draw a slot.

Excellent work and report! You are so fortunate to have such a great tracking coach. You will have this done in no time.

You are so right there. I have had 2 good coaches. Dot who got me started and then she sent me on to Ruth, who was good long before she decided to become a judge. Now if only I don’t mess it up!

My same thoughts as Carole.
Lisa, you and Ziva are gonna knock this out of the park. Training for success is the best. You two are on your way! 🙂
Terri and Qwendi