Ziva ran a full regulation track Friday with the exception of 2 more turns than are allowed on a test.  The unit of measure for each leg is in yards.  The dotted and yellow lines are the tracklayers path.  The little divots indicate where Ziva deviated from the track-as you can see she was pretty much dead on 🙂  The biggest deviation occurred on the first 100 yard leg.  There were so many animal tracks on that leg, I could see the paths crossing it.  You often can’t tell which are the animal tracks vs the tracklayers path, so you must follow your dog and that is easier said than done 🙂    She investigated several, but then said “nope, not what I’m looking for.  Ruth’s notes are:

3.  Great article find in the woods.

In the woods she was never more that 5 feet off of the track and there was a waterfall to the right that carried scent away, but she found her way back each time the scent carried by the water and air currents lured her away.  It was about 82 degrees and sunny so it was very exhausing work for her to track in the high grass in the open fields.  I stopped 4-5 times to give her water.  Before going into the woods, I was going to let her rest and shade her with my body for a bit after watering her, but she took about a 10 second break and put herself back to work.  Going from shade to sun can throw them off, but she really seemed to handle it well even though I’m sure the shade was enticing.  We had several unplanned ATV crosstracks which she also took the time to investigate and then went right back to where she needed to be.  The second to last leg before the end was very close to the hedge row.  That combination can draw them from the sun into the shade, but again she managed to analyze and be where she needed to be.  Her article indications were very good (of course they were–I had just gotten done telling Ruth she was starting to blow by them again!!).  At the end, Ruth declared, she is TDX ready, start signing up for tests to try and get in-now all we need to do is work on you!!!!!  It still freaks me out a bit when she is analyzing and I know she is not on the track-if I read her wrong or don’t trust to follow her I will ruin the test (of course it’s always the handlers fault).  As fall draws closer we will need to get some plowed land practice if I do not get into one of the end of Sept, begining of October trials.  We will be working roads this week.  Will keep you posted! 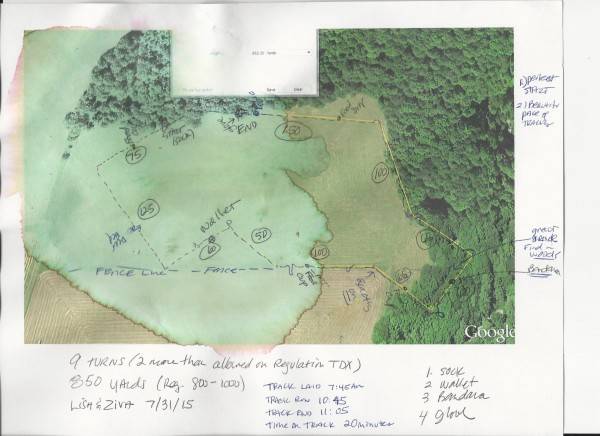 EXCELLENT!!! Thank you so much for sharing.
You know that old saying – Trust your dog!
They are much better at this than we are. She’s an honest worker – go with it.

This is very informative Lisa. Thanks for posting the track diagram.

That is FASCINATING! It makes sense, though – there’s no way we should even imagine we could outthink them when they’re working with scent drive. Amazing.