Total Brags for a Total Dog at the UKC Premier

This weekend was the UKC Premier and I showed 4 dogs in 4 different events (5 dogs including Lola) over 4 days.  Here is a breakdown of their successes:
Ember: entered in Total Dog with conformation on Friday and Rally 1 B on Saturday.  She won Best of Breed in conformation against a Grand Champion dog and a Class dog, and earned 96/100 in Rally for a qualifying score.  She had a beautiful run and the deductions were most likely from handler errors.  She was extremely patient and well behaved on Friday and Saturday for Group and Total Dog Best in Show, having to stay all day.  We did not leave until 9pm Saturday night after the Total Dog Parade and Best in Show.  They had all of the Total Dog Qualifiers enter the ring at the same time and be announced by name and titles one at a time.  There were about 50 regular Total Dog Qualifiers and 19 altered Total Dog Qualifiers.  This is the first year that UKC is recognizing and offering Altered Total Dog.  They have to qualify in conformation one day and a performance event the next day.  I am extremely proud of Ember.
Cabrera: entered in weight pull all 4 days and Total Dog with conformation on Friday and weight pull as the performance event.  He earned his UWP (United Weight Pull) title on Thursday and earned 10 pts towards his Champion Weight Pull title on Friday and Saturday.  I scratched him on Sunday because he was starting to struggle to pull the heavier weight on Saturday and I didn’t want him to hurt himself.  Three days in a row of pulling is a lot for him.  He did not qualify in conformation so he did not qualify for Total Dog.  There will be other times.  My goal with him for this weekend was to earn his UWP, which he did.  He was a lot of fun to pull this weekend, and always has kisses for me at the end.
Gibbs: entered in weight pull 3 days and agility today.  He earned his AG1 (level 1) title today and placed 3rd.  It was extremely wet and muddy from all the rain all weekend long and continued to rain and storm today so I was happy with his performance despite the terrible weather.  It started storming right after we finished and he is terrified of storms.  He was a trooper this weekend, though.  He pulled every day in weight pull but did not pull enough for a q.  He tried and improved throughout the weekend, so I’m very happy with his effort.  I even got my mom to handle him today, which is a big deal for whoever has met her.  She has always had me compete with him because she gets too nervous, but she actually got in the ring and showed him today.  It was pretty comical because of course she made some mistakes but everyone in weight pull is extremely nice and helpful, especially the judge, and were helping her out.  They absolutely loved Gibbs.
Qwendi: entered in conformation on Friday and won her class.  We were both a muddy mess after the class because it had been raining.  Only one more win with competition and she will be a Champion! Thank you Terri for letting me show her! 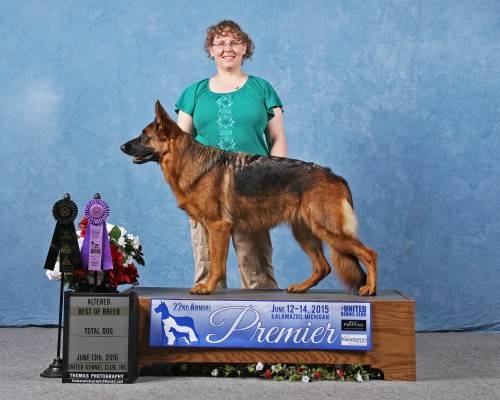 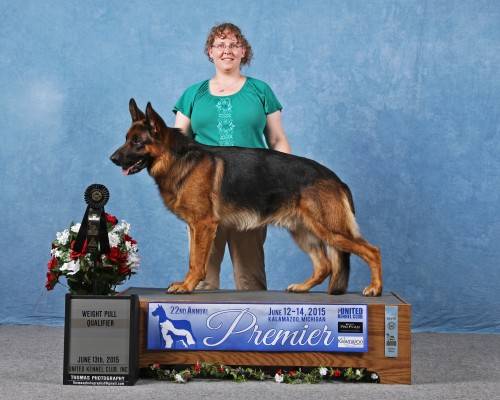 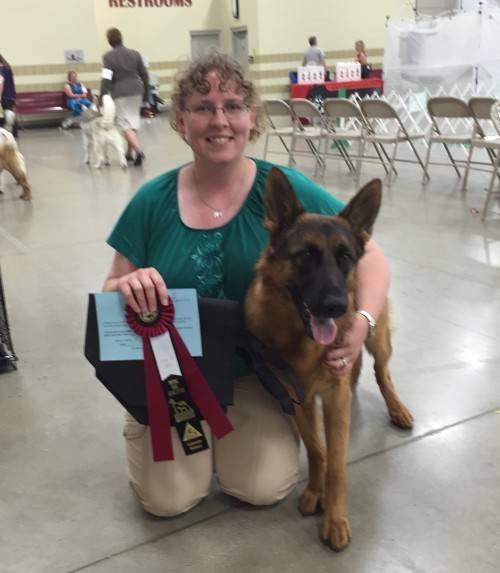 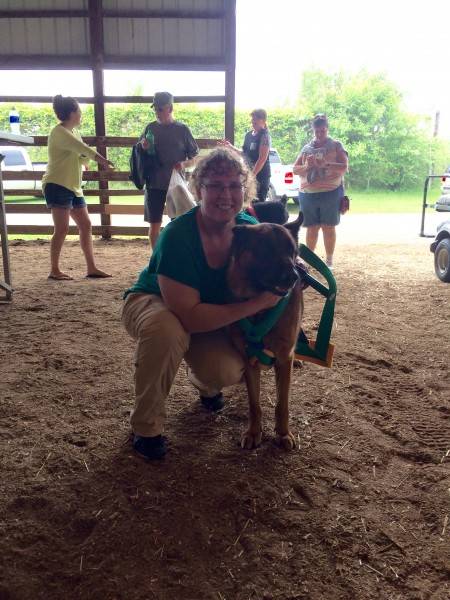 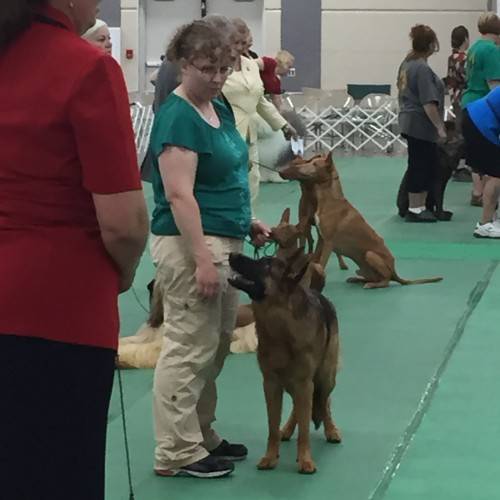 Tired after a long day and they’re still announcing the qualifiers!  We’re both bored in this picture. 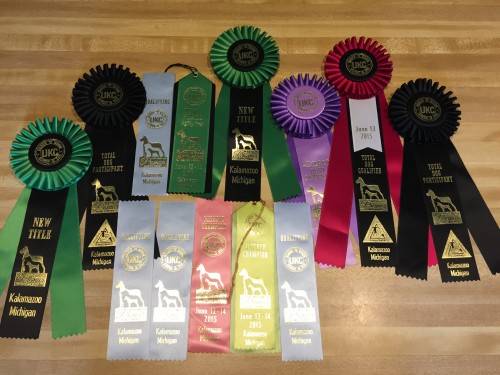 The loot.
I’ll post videos of Cabrera pulling when I can figure it out.

Wow, what a weekend you had! Cabrera really likes to pull, you can see it. I hope you had help carrying your loot home. Congratulations!!!!

Congratulations Jennifer on your super weekend!

Holy moly, you had a GREAT weekend! Congrats!

Yes, another dull, boring weekend for Jennifer and crew!
AWESOME, FANTASTIC, OUTSTANDING job!!
I noticed that Chica was bragging about her Bro on facebook as she was curled up on her recliner this morning…