Eva Stock and her Jessica (E-litter Gavin x Bailey) had a successful time at the GSDCA Sieger show followed by competing in two events at the GSDCA Nationals starting the week after the sieger show. Jessica earned her SG rating at the sieger show and will be the last time she is show as she will be turning two in December and will not be titled in schutzhund so she can no longer compete in the show ring. At the GSDCA Nationals Jessica earned her AKC TD title, Tracking Dog, only one of 3 to pass the tracking test at this event. The next day they competed in the Temperament Certification with many compliments and kudos from the testers on Jessica’s behavior. This added a new title of TC to her name. Congratulations Eva on your accomplishments! 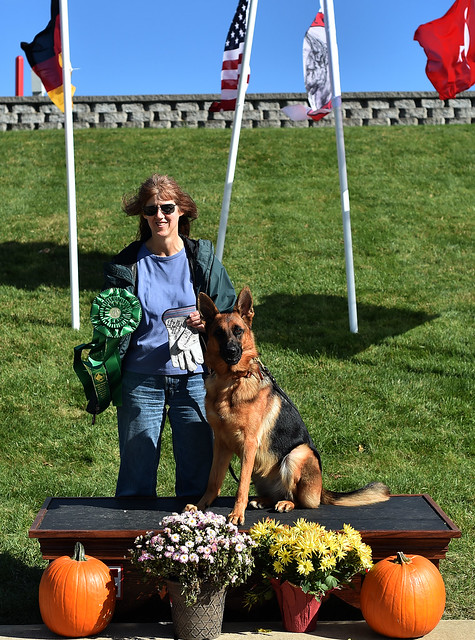 The glove Eva is holding is the glove that Jessica found at the end of the 500 yard track which has anywhere from 3 – 5 turns.

Jessica……I mean Eva!!! LOL Finally by the last day of the Sieger Show, I stopped calling Eva…Jessica. duh
It was alot of fun and exhaustion meeting these two gals. And Eva and Jessica’s accomplishments at the GSDCA National was what prompted my earlier question on entering events at the National.
They were both quite busy with events in both venues.
I hope our paths meet again, Eva. And, I will still probably call you Jess—i—ccaaaa. 🙂

CONGRATULATIONS Eva and Jessica your SG, TD and TC!

What a very special place to get your Tracking title and Temperament Certificate. Wow, that is some fancy qualifying ribbon.

Congratulations Eva. Very nice. You must be very proud of her to be the only TD awarded that day.