Yesterday we received an e-mail from Sandy of Vested Interest in K-9s. The vest that was ordered in celebration of Ivan’s life has been issued to a Police Dog in Rhode Island.

From the beginning Vested Interest have wanted us to be involved in deciding which dog would get the vest. Originally there was a dog in Massachusetts that needed a vest and we wanted it to go to him. When he graduated from the Police Academy Canine Training the department paid for the vest themselves so that another dog in need could benefit from this gift. Sandy told us about a GSD in Warwick, Rhode Island that was currently working without a vest. We felt that there was a connection there, as Ivan earned his CDX in his last obedience trial in Warwick, and decided that this dog should get the vest. He had to be measured as these vests are custom-made to fit each dog. 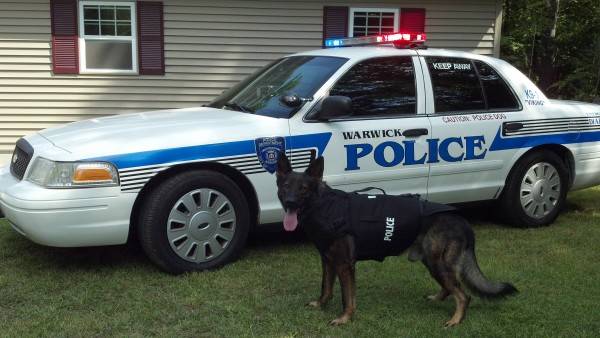 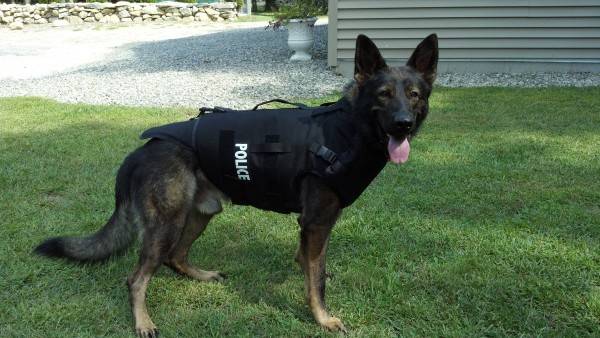 The vest has this embroidered inscription. 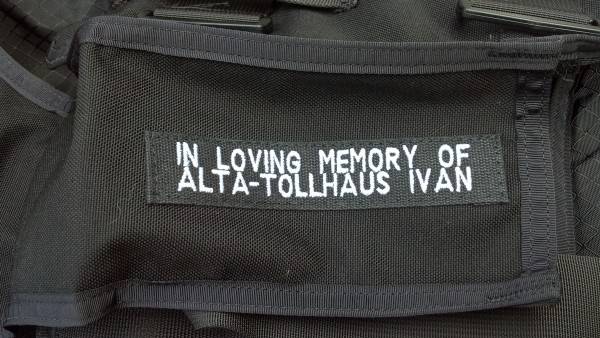 We will be attending a Vesting Ceremony sometime in September or early October. We will be sure to post pictures.

Thank you all again so much for your love and support that made this vest possible .

Barb, thanks so much for all of your hard work to pull this all together. It means so much to us.

Update on the K9 Vested Interest Donations for Ivan

That is fabulous! I can’t imagine poor Viking working without a vest. Great connection to Warwick too!

Viking is beautiful and so deserving of a vest in Ivan’s memory. So happy to hear how this worked out.

Thank you, Barb, for organizing this good deed!!!

Viking you look so proud in your uniform. I know you will be safe…you have the best guardian angel looking out for you.

Tif, you’re right! Viking does seem to be showing off his new vest.

Thank you, Barb, for your coordination of this project, and thank you to all the A-T family for your generous donations.

Aw, I hope Viking has a long, successful career and never needs his vest, but I’m glad he has it. Great way to honor Ivan and you and Jack. I know firsthand being married to a police officer isn’t always easy, but I so respect and appreciate the job you do. I bet the vesting ceremony will be neat!

This is so wonderful, you can see the pride Viking has for his new work gear. Viking may you have a long and successful career.

Thank you to the many people that donated money for this vest and a huge thank you to Barb for doing everything from start to finish to make this happen. Big group hug to Barb!

Thanks for the hug, but it all starts with Julie and everyone’s support and generosity that deserves all the thanks. I am just so grateful to have Syd and be part of his awesome family.

I do want to share with everyone how wonderful it has been to work with Sandy Marcal of Vested Interest K9. Sandy was overwhelmed with Ivan’s story and our group’s response. She took a personal interest and worked so hard in finding the right match for Lynda and Jack so that this sponsorship could honor the memory of Ivan in the way that would be the most meaningful for them. Thank you, Sandy.

Viking looks soooo happy and proud in his new uniform. I am looking forward to seeing photos from the official vesting ceremony. I don’t know if it has been mentioned before, but as I understand, the officier also does community events with Viking. I think Ivan is proud, and will definitely be the perfect angel.

Thank you Lynda and Jack for being such an inspiration to so many of us with your dogs. We love them all!

Seeing Viking standing there, in front of the patrol car, I really got the impression that Ivan was there in spirit. Seeing the custom patch in the third photo got me all choked up.

I hope Viking never needs that vest, but if he does it will be there all because of what an incredible dog Ivan was and how he touched so many lives, even so many of ours who never met the legend in person.

That vest looks great, may that dog serve his community for many years, bearing the name of dear Ivan on his side, how fitting.:)