My houseplant could have killed W-Dutch! Check all your plants!

There are dangers that can lurk right under our noses that can make our puppies very, very sick, cause permanent damage to their kidneys, and even kill them!  For example, take a good look at this popular house plant, the Peace Lily.  There was a large plant on the floor of my dining room, and I didn’t notice that its leaves were becoming frayed. 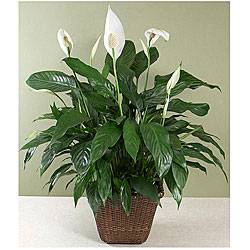 Before we left for Newport a couple of weeks ago, Dutch threw up a couple of times over a 3 day period.  Next, I discovered that he had thrown up his undigested ground chicken and potatoes on the floor of his crate.  I  took him out, and he had very bad diarrhea.  He wouldn’t even drink!  He looked like a sick puppy, lethargic, and just lying down with his sad face looking at us.  Of course, we panicked.  I called the vet’s office, trying not to cry on the phone, and brought him in immediately.  HIs temperature was close to normal.   His stool was clear yellow and ran out during the rectal exam. Clinically, she said he was already dehydrated. He was given 300 ml of fluid subcutaneously, which she said he would absorb over the course of the day.  She also prescribed 250 mg Metronidazole twice daily for 5 days.  He slept most  of the day afterward, and only took a few licks of water.  At 5pm, he ate one cup of chicken/potato mixture, drank a little water, and went back to sleep.  Later, he only had two more episodes of diarrhea.

Fortunately, Dutch recovered completely, and his blood work revealed no kidney damage.  We had no idea what had made him sick, and we headed off for our Newport vacation.  Two days ago, after we returned home, he again threw up all his food after lunch.  We searched the house to see if there was anything he could have gotten in to.  That is when I discovered the frayed leaves, and parts of them on the floor.  I checked the internet to see if this plant was toxic, and this is what I found:

Peace lily (Spathiphyllum sp.) is considered to be toxic to pets—and if any part of the plant is chewed or ingested, it can cause significant mechanical irritation and swelling of the oral tissues and other parts of the GI tract. This is true for both cats and dogs.

To get a bit technical, these plants contain cells known as idioblasts. Idioblasts contain raphides, which are slender, spearlike parts of calcium oxalate crystals. Raphides are sharp and needle-shaped, and are packed in a gelatinous substance. When the tip of the idioblast is broken, sap from the plant—or saliva from an animal—enters the cell, causing the gelatin to swell. The swelling action forces the raphides to shoot from the cell, kind of like a gun discharging a bullet. The calcium oxalate crystals penetrate an animal’s oral mucosa, tongue, and throat, causing damage. The cells may continue to expel crystals for a significant amount of time, even after a piece of plant material is swallowed. As this is happening, proteolytic enzymes stimulate the release of kinins and histamines by the body. The rapid inflammatory response from the release of these substances aggravates the damage caused by the crystals.  Chewing, bruising, tearing, or otherwise damaging the plant is necessary to produce these effects.

According to our experience at the APCC, most animals exhibit GI-related symptoms, including drooling, nausea, vomiting, diarrhea, from ingesting peace lilies. On rare occasions, oropharyngeal swelling can be severe. Tongue swelling, trouble swallowing, and difficulty in breathing may be seen in these cases.  Based on this information, we definitely advise keeping peace lily plants out of the reach of pets.

HOW DOES THIS HAPPEN?   What pets do is, they sniff the plants, mess with the pots and in the process of doing so they swallow the leaves, flowers, etc. They start sneezing and coughing immediately after chewing the plant. You should make them vomit deliberately to avoid poisoning. When left unattended, they experience severe irritation and burning in their mouth, tongue and stomach. They drool excessively, face difficulty in swallowing and breathing, become sluggish and vomit repeatedly. Same symptoms are observed in cats. Their behavior changes drastically; it affects their mood (become lethargic and depressed) as well as physical health. Their frequency of urination reduces after being poisoned heavily by peace lily. Cats are highly sensitive to peace lilies because if left untreated for more than 72 hours, they can die of renal failure.

I hope no one else has to go through this with their fur babies, canine or feline.  Don’t have anything in your house unless you know that it is safe!  Puppies chew on almost anything, and they are very fast.  Our homes must be puppy-safe before they have full run of the house.

I consider everything from chomping level and down to be potential hazards and fair game for a chewing session. That’s why you’ll never find plants, potpourri (very deadly), scented candles, etc. etc. in my house unless they are safely up on a shelf or in a place where there is no chance of them falling.

I’m with Lee on this. Somewhere I have a list of plants that are poisonous. I’ll post as soon as it’s located.

You are a good dog Mom, Beverly! I’m glad you quickly located the source of the problem and that Dutch is OK. So much for the Peace Lily being very peaceful.

This is not my favorite organization, but check out this list. It is quite extensive. (My list was for cats and not as complete as this.)

Thanks for sharing, I believe that I have a Peace Lily in my house too! Need to get get rid of it..

Oh my gosh, thank you, Beverly. Big hugs to you and Dutch.