(W) Dutch – First Vet Visit: The Good and the Bad

We just took (W) Dutch in for his first vet visit this morning.  Thanks to Karen Murray, we were armed with copies of medical reports and articles related to vaccinations.  Julie had provided us with a list of holistic vets, so we were prepared to change if we were not comfortable with our veterinary group.  We want to protect our beloved Dutch, without exposing him to excessive risks of blindly throwing everything at him because it’s easier than researching the facts and educating ourselves.

After a lengthy discussion, our vet was in agreement with a proposed schedule of staggered vaccinations with inactivated vaccines (killed) whenever possible (rabies, parvovirus, etc.).    We will be measuring serum antibody titres against specific infectious agents such as distemper, parvovirus before vaccinations are given.  No vaccinations were given during this visit.

Dutch now weighs 23.8 pounds at 10 weeks and 5 days old.  He was so good during the visit, enduring the examination with great composure, except during the ear exam/treatment.  Perfect hips & elbows, eyes, very nice gait, just perfect inside and out except for his ears 🙁 .   I had no idea that anything was wrong with his ears – he wasn’t shaking or scratching them at all!  I’ve just been admiring how they’ve been standing up already so well.  In fact, the vet, among all the other accolades about what a great pup I have, mentioned that his ear cartilage was good.  But, inside those beautiful ears, was a thriving yeast colony!  No mites, just yeast.  He had been scratching his body a little, and nibbling his back legs and feet a little at times, the way a dog with a flea might go after it.  However, his skin and coat are perfect – the vet found nothing after a thorough comb-through.

The vet removed quite a bit of yucky black yeast debris from both ears, and gave us the otic wash and Animax Ointment (nystatin-neomycin sulfate-thiostrepton-triamcinolone acetonide) to treat daily. We are concerned about all the massaging and manipulation of his ears during this critical time for the ears to mature.  Any advice?  We have seen this problem many times before in our Labs, and have been told that it’s common in dogs with those floppy ears.  Dutch’s ears aren’t floppy any more!  I feel a little guilty for not having noticed it.  We have to stay on top of this all the time with our Labs, and always have the ear wash on hand. 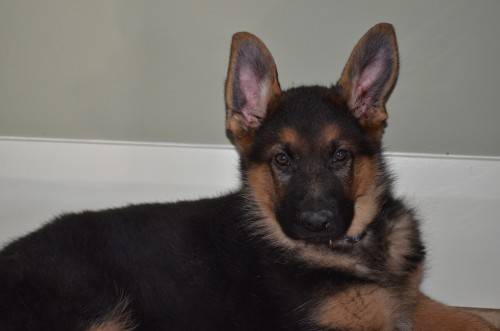 Dutch is so GORGEOUS! I can hardly stand it. Don’t feel bad about the ears, you caught it in time, and he will be fine. I’m happy you had such a comprehensive and it sounds like very positive experience with the vet!

I agree with Jennie on both counts… Dutch is gorgeous & the visit was successful.

Just wanted to add that the Animax ointment has been my savior for years. I always keep a tube handy at all times. A little of it goes a long way. I have used it for sore spots, itchy & red areas, cuts, & of course ears. And the healing is overnite, almost like the spot was never there. Hope Dutch heals fast and like the rest of us, you learn something new every day.

This little guy look so much like his Daddy! I’m glad your Vet listened to your concerns and it was a positive visit. 🙂

If you Google “TrueBlue Super Easy Ear Wipes”, those are the ones I used for years. Smells great, all natural, and does a great job of keeping the nasty bits out of the ears. Check them out, they are well worth it.

The TrueBlue wipes are just great… they are circular pads so they are very easy to use too. You just shape it around your finger then go to town. If you scratch around the ear at they same time it’s like you’re giving them a massage, and not doing any of that awful hygiene maintenance stuff they hate so much!

“We are concerned about all the massaging and manipulation of his ears during this critical time for the ears to mature. Any advice?”

Thanks, Julie! That seems to be working well. Dutch actually seemed to like the gentle massage. He did not like it when the vet was trying to clean his ears with the cue tips. But through it all, he was kissing everyone and so friendly. I will never be able to thank you enough for bringing him into our lives.

I just have to add that Dutch is a handsome devil!!

Dutch is a looker!!

I am SOOOOOO proud of you both! Way to go!
Some dogs may only need their ears clean occasionally, but others with yeasty ears need a daily cleaning until under control. It all depends on how much a particular dog produces. One of the best and inexpensive products you can purchase is good old fashion “Witch Hazel”! Use with cotton balls…..no Q Tips, and just keep wiping out until cleaned. White Vinegar can also be used. Acidophilus could also help promote a healthy balance of flora in the gut. There are other natural ways to fight yeast if it is on the dogs’ whole body or if it is in-between their toes too, which sounds like Dutch might have if he is itching all over.
I hate to keep “beating a dead horse” and I know you are probably sick of hearing me say the same things over and over but grains are a big factor with yeast problems and inoculations break down the immune system allowing these types of things (and worse) to creep in. Meat based foods should be fed without grains or potatoes. If you don’t want to feed a raw food diet, The Honest Kitchen Embark (all life stages) would be a great substitute.
Holistic vets also say that “a vet will hand a client with a yeasty dog a cream, salve or dip, with instructions to just keep applying it to the infected area. The problem with this approach is that as yeast dies off, it forms layer of dead yeast on top of layer of dead yeast. Unless you remove the dead layers of yeast and disinfect the skin, adding loads of ointment to layers of dead yeast can actually exacerbate the problem.” That’s where the Witch Hazel comes into play!
I also think that vets need to inform their clients as to what they are giving their pets and unfortunately, most vets don’t read all of the fine print that comes with a product. According to the manufacturer, Altana, Animax is a veterinary antimicrobial and steroid ointment. See “section 7” for warnings.
https://www.accessbutler.com/msdsimages/A0001895.pdf