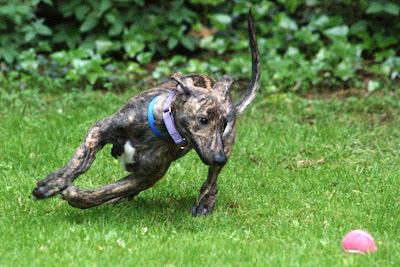 Red chases his ball at about 3 months old. 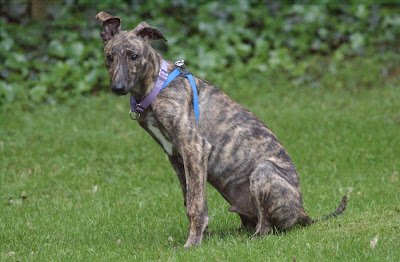 Red shows that Greyhound CAN sit at about 3 months old. 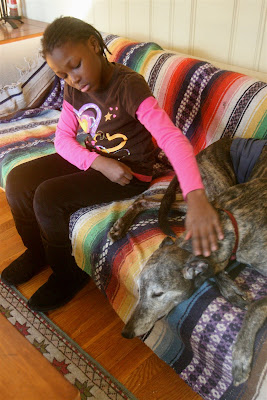 The Kidlet pets Red on the morning of his last day. 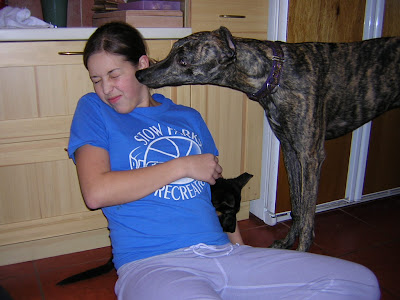 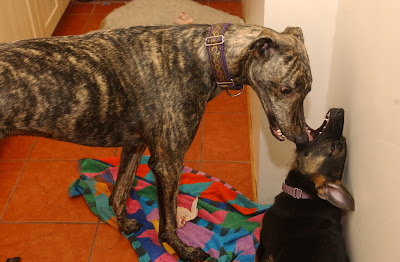 Red explains to Blue, 4 months, who the boss dog is. 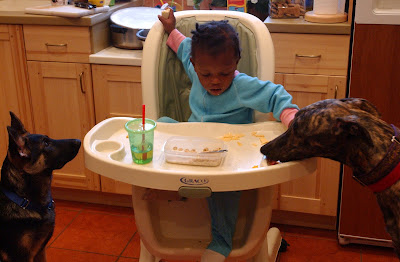 Blue, 6 months old, and Red, about a year old, share the Kidlet’s breakfast. She is about 20 months old. 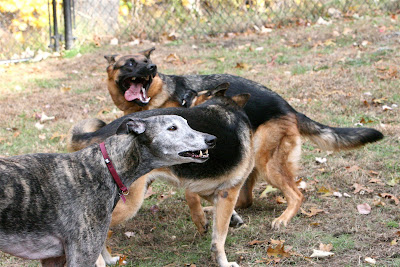 Red was found to have an advance case of canine osteosarcoma on Tuesday, Dec 20, 2011, in the right upper arm bone (near the shoulder). Amputation was not feasible. He has had persistent lameness off and on for a few weeks. The weekend before he started being restless at night, yelping in pain for no reason that I could see and clinging to me so we took the first available vet appointment.

His spirit was great. He wanted to play, go for walks, run the fence line barking at the loose dogs who visit more often than I’d like and is always ready to eat. To the end was the first dog to appear when a plastic bag rattles. Until the end he was trying to steal food off the kitchen counter.

The tumor was so large and the bone was so thin that the Kidlet joined me when we took him to the vet to be put him to sleep on Thursday, Dec 22. She wanted a paw print from him, too, which we did after he was gone.

With the holidays, Red’s cancer and death and Via’s false pregnancy, we did not do much formal organized training the last couple of weeks. We worked on Via being calm in the house with Blue as Red was the peace keeper.

Roxana, my spouse, has started working on sit, down, come, touch and name with Via. The Kidlet continues to play almost daily with the flirt pole and Via and is conditioning Blue to hang out with her in her room.

Blue is very lost without Red. She was basically HIS dog. He was 9 months old when she joined our household at 9 weeks old . He immediately took charge of her. Blue’s new favorite place is to be leaning against some human’s leg. I’ve been playing confidence building games with her but I know that she is grieving.

Via looked for Red at his spot on the couch several times a day for a few days but doesn’t any more. Her play with Blue has become more bossy and frantic and she is less happy in her crate.

Lessons From a 2-year-old

I am sorry Robin and kidlet for your loss. Godspeed Red.

I am so sorry for your loss. There are no words to ease your pain but know that many of us understand your loss.

Robin, my heart goes out to you & your entire family, as I’ve been thru this pain twice in 2011. It never gets any easier.
Hope you can console yourself with the wonderful memories you all had with Red & the wonderful years he had with you. He is on the other side of the Rainbow bridge…

I am so sorry for your loss.

Robin, I’m so sorry for you & your family’s loss. I fully understand having lost both of my girls in 2011. The final act of love for our fur kids causes us so much pain. All dogs go the heaven and when it is time will be there to welcome you back home once again. Hugs to you.

Oh Robin, I’m so very sorry to hear of your loss.

Robin,
I’m sorry to hear about Red. I know what you are going through and my thoughts are with you.

Robin I am so sorry for all of you,. It is not easy to loose a part of the family!!

Robin and kidlet, I am so sorry to hear of your loss. There just aren’t any words only time that allows the pain to dull and let the happy memories take over. He’ll always be missed, it is obvious how much he was loved.