First off, I would like to express how proud I am of all of the dogs and handlers who represented Alta-Tollhaus at the 2011 North American Seigar Show. Even though I could not make it because of an agility trial, I have heard that everyone showed well, did a wonderful job of keeping their dogs relaxed in the overwhelmingly stimulating environment, and most of all – for letting their dogs know that no matter what happened in the ring – they were the BEST OF THE BEST! After all – that is why you went in the first place!

Secondly, I would like to say that I was VERY impressed with how well the Xbox Progeny Group represented their awesome father – VA1 Xbox dei Precision SchH3 KKL1a.

Now, before I go on, I want to express how proud I am of Funny. At 11 years old, Julie entered Funny in the Veterans group. And after many, many years out of the show ring, I can’t believe she won the class – But she did it – Somehow the old girl did it! Funny has always been special, her and Julie have a bond that I cannot begin to describe and I know that Julie will never be so lucky to have it with another dog again.

That single achievement is all anyone could hope for when participating at this prestigious event. I look forward to watching Alta-Tollhaus battling it out next year for Top German Shepherd Dog at the 2012 North American Seigar Show!!!

I was definitely cheering you all on from Battle Creek, MI! 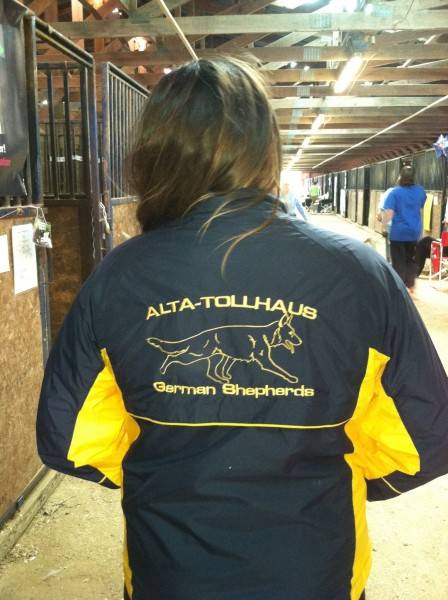 I thought I heard something way off in the distance!!! HEHEHE Missed you, hopefully next yt you will join us.

Now, where can I get one of those jackets?

This is exactly the reason why I like this new family… Very thoughtful of you Monica!

And yes, how does someone get their hands on such a cool jacket? It does get cold in Florida sometime…(LOL)…

For the sake of sounding like a newbie, where does the name “Alta-Tollhaus” come from & what does it mean? I am sure someone is bound to ask me that after they meet U-Rock.

Good question, I would love to hear the story of Alta Tollhaus.

Good grief, you people! Does Tollhaus give out their secret recipe?

That isn’t their secret recipe on the back of the chocolate chip bag?

I DO have the best chocolate chip cookie recipe ever. Tiffany and I developed it…and it is the best! I have even won a cookie contest with it.

I need a volunteer to do clothing…because GOD knows it will never get done if left to me! The biggest hold up was deciding on colors. The two choices were narrowed down to Navy and gold or Navy and electric green. The latter was strongly disliked by some of the men. For several reasons Navy and gold wins.

I will do clothing!!!

I also like black and red — the color of A-T dogs!

one of the goals was to come up with colors no one else was using. Several kennels use black and red. Black and gold is also popular.

Oh, I see. Yes, we need to stand out from the pack!

Navy and gold is good. I also like grey (for sweatshirts/t-shirts especially) w/red print, or dark red w/gold print.

Count me in! I want a jacket too!!

Thank you Monica it was definitely a blast. Love the jacket. Did you just go and get it made up yourself, or is this the ‘official AT’ jacket? Matt and I (along with many others) have been asking Julie for a while now. Let us know how we go about ordering them. Thanks.

I want a jacket! Is it waterproof? We trained in the rain last night.

Hey, I think a jacket should come with every new puppy….. Imagine the advertisement that will generate…

U-Rock & Batman should bring one to their owners, right Jennie?

I agree – a jacket with every new puppy! Ah, the advertising possibilities! I, too, would love to purchase one. So who volunteered to take on the A-T clothing line?? 🙂

I have been wondering about the origin of the Alta-Tollhaus name too… It must be a closely guarded secret? Or subliminal advertising… every time someone hears Alta-Tollhaus they think of fresh baked cookies and are so drawn that they must have an Alta-Tollhaus puppy?

I think it is better I don;’t say, the mystique of not knowing is much more exciting.

But here is something fun…Tollhaus translates in German to “Cool” house. Not cool as cold, but cool as in really cool and awesome.

Thanks for throwing us a bone!!! LOLOLOL

I have been wondering about the AT name for some time now.
When Quinn came to live at our house my whole family asked this question. They will not alow be the answer “I don’t know” so of course I contemplated asking this question the family blog, but I was hesitant not wanting to sound like a complete newbie. Well since this is the perfect opportunity since others have asked. I will ask it another way than those before me. Is it a mixture of Italian and German?

Trust me you all will really be let down when I explain it to you.

Your congratulations are greatly appreciated. We missed you. Funny did do Julie very proud, she is an awesome dog.

I agree with the group, we all need those jackets.

I think we need a likeness of Funny on our clothing.

I actually bought the jacket back in June when I went to Minnesota for the agility Nationals, so it is not the official AT jacket.

Thank you so much Monica for your eloquent congratulations. It wasn’t the same without you there…and the drive was certainly much longer. 🙂

I bet the drive was longer… Considering you probably weren’t talking about magical unicorns the whole way.. 😉

We had a great time at NASS even though we only had a short trip down because of Dylan. We missed you there BUT we did remember your trick and gave Ivan a spoonful of honey!

How did you do in the agility trial?

Hasn’t Dylan recovered from his surgery?

It’s been a LONG road, 8+ weeks, but Dylan is finally getting better.
Thanks for asking.

Lynda- Nina for 2 QQ’s. And are you going to that really big trial in NY end of March? It has like agility, obedience, rally, and conformation? How is Dylan doing?

Monica is going to focus on getting Nina’s MACH this next year. She is also going to be working with Cadence toward her advanced schutzhund titles. A GSD is too big to live with MOnica and her Grandparents but with Monica getting her drivers license she will be able to go to Gustavos and work with Cadence. The tracking part of schutzhund test will be my job.

Hi Monica,
Congratulations on your 2 QQ’s!
Which NY show is the big one? I’ve never been to that.
I am going to the “Springfield Cluster” in Springfield, Mass after Thanksgiving. It is the biggest show/trial in this area. It has 4 agility rings, 4 obed/rally rings and a huge all breed confomation show and runs from Friday Nov 25 – Mon Nov. 28th. I will be there on Fri and Saturday.
I didn’t post on the blog but after three surgeries Dylan kept having relapses and his infection would swell up again. Just before NASS we took him to a large vet hospital near Boston and he had a CT scan and more surgery. This time Dylan seems to be much better. He has not had a relapse. He was on antibiotics for three weeks which he just finsihed so I’m watching him carefully…but so far, so good. I think he will be able to compete in Springfield but will see at the time and will do what is best for Dylan.
Hope the puppies are doing well.

@Lynda Where in NY is the big rally trial at the end of MArch?

Hi Lisa,
I’m not sure which NY show one Monica means.

There is a big show/trial in Springfield, MA at Thanksgiving – see above.

To find rally trials in your area you can go on the AKC website and search events at http://www.akc.org/events/search

There is also another site you can look up events on : http://www.infodog.com/