Since we did not get to run Via, 8 months old O litter puppy, in Rally Sunday afternoon, the Kidlet and I took her tracking. After the last track was run, Via (Allie-Xbox) and the Kidlet took a walk in the field and played their version of the two toy game with an empty water bottle and a tug toy.

I spent that time talking to a local police officer who stopped to watch us work on tracking. We talked quite some time about tracking, starting puppies in agility, local positive dog training resources for kids and the harsh methods that his department uses to train their 4 legged officers. He said that several officers have gotten bitten by the department’s dogs both at work and during leisure time! He has a 10 year old daughter and a 12 week old lab that he’d like to get involved in something, put wants it to be with positive, motivational training. 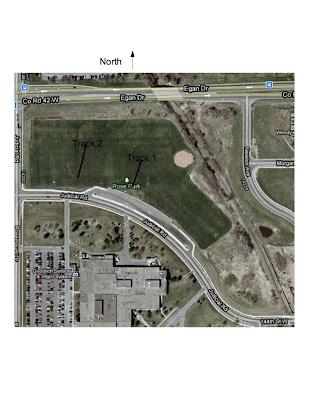 The tracks on the chart are not to scale but are in the correct areas of the field.

Date: 04/17/2011
Day: Sunday
Time: 12:30 pm (for the laying of the first track. Both were ran as soon as they were lain. The first track was ran two times, one after the other)
Activity: Tracking training, short grass
Location: Rose Park, 14250 Judicial Rd, Burnsville, MN (Rose Park is a 12-acre community park located on the south side of County Road 42 just east of the intersection with Rosemount Drive. It is a good place to return to because it has short, medium and long grass areas as well as a sandy baseball infield.)
Weather: Partly Sunny (mostly cloudy)
Temp: 35.6 °F
Humidity: 40%
Wind: Light (16.34 MPH North West)
Tracklayer: handler for track 1 and the Kidlet for Track 2 (dog was crated out of sight in the car while track was laid.)
Track length: 30 paces / 70 paces (child lain) with the wind blowing across the track from the west. (Track 2 was lain west of track 1)
Environment/conditions: Soccer field, short grass, few cross tracks.
Distractions: Person, the dog’s child, was following us. The constant passing of cars on Route 42 in the direction that dog was heading on the track about 100 yard away to the north was a background distraction.
K9 Status: Via was crated for about 5 hours before tracking.
Objectives: Learning doesn’t have to be out of a book or at a desk. The Kidlet, age 9, learns to put down toe to heel tracks for Via. She has lain AKC style tracks and has been the “victim” for SAR trailing dogs in the past.

Here is a short video of the young tracklayer at work.

We did not use any flags. There was a small scent pad and a plastic start article at the beginning and a plastic dog bowl on pace at the end of the track. These items were just used to mark the track for the humans.

Track 1:
The track 1 was laid for 30 paces heel to toe with deli chicken in each toe.

The track was not aged. I laid the track in a straight line between start and end item. Via tracked in her Halti no pull harness with a 4 foot lead attached to the ring on the back of the harness so the no pull feature was disengaged.

Via ran the track without lifting her head BUT did not stop to eat very much of the meat. She even tracked my loop back to the car. So we ran the track twice before I re-crated her and watched the Kidlet put down the second track.

Track 2:
The track 2 was laid (mostly straight) heel to toe with Bil-Jac Little-Jacs moist treats in each toe for what measured to be 70 of my paces.

The track was not aged. Via tracked in her Halti no pull harness with a 4 foot lead attached to the ring on the back of the harness so the no pull feature was disengaged.

Via started tracking to the track before getting to the scent pad but got very distracted by the traffic about 20 paces in to the track. She lifted her head and watched the cars for about 20 seconds. I just waited her out. She put her head back down and did not lift her head from the track until the end. She DID NOT track the kid’s foot steps back to the car like she does mine.

Enough about the dog—let’s talk about the Kidlet! She can be a Professional Track Layer! Please send the kidlet to FL to lay tracks for us.

I was just thinking the same thing Carole. Boy I wish I could crouch and bend like that now days!

I looked into tracking club here and actually found a good one, the only thing that I didn’t like is we have to be at the site at the crack of dawn. No way jose, I like my sleep. 😉