How We Spent Our Monday Afternoon 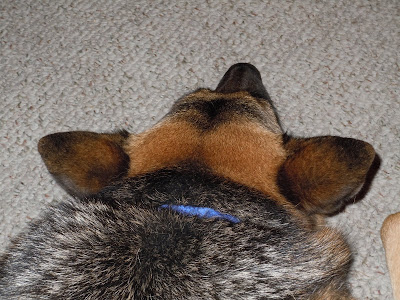 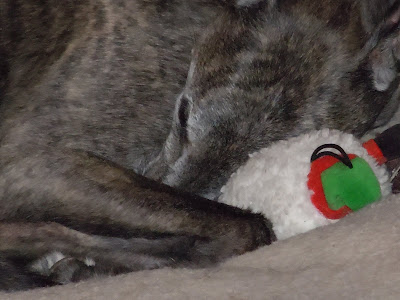 Via, not so much… 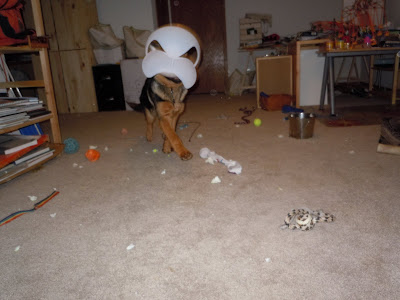 Robin, you made me laugh out loud first thing in the morning. Good job!!! She is her mother’s daughter. Nice front and good movement on this little monster.

Robin, I laughed so hard! This kid cracks me up. I agree with Julie on the front and movement.

Someone asked me why I let her get away with making messes (she discovered the joy of making confetti from Nurf footballs), playing with my shoes and boots and redesigning the snow piles in the front yard. One half of the yard looks like a moon scape.

The only thing that she has destroyed is HER football. I plan to get her another one from the dollar store.

Via plays with stuff then brings it to me or my spouse trade for – her favorite – next to rabbit droppings – deli ham or a quick game of tug. Sometimes I’ll give the shoe or whatever back to her or throw it for her. Sometimes I put it out of reach.

I handed her the trash can top and asked her, “What do you think of this?” She had a BLAST. Did you watch the video? I don’t have much luck getting videos to load on Long Dangerous Tails. I plan to get Julie to give a me a tutorial when I see her at the end of the month.

Now I am working on getting Via to pick up the pieces from the football and trading them for a bit of ham as I have not yet collected any rabbit droppings to use as treats. Rabbit scat was a particular favorite treat for Blue when she was a youngster, too.

The carry over has been that if I say, leave that alone, she does. AND she will grab something novel and show it to me instead of carrying it off to destroy.