Max Honks to be Rescued 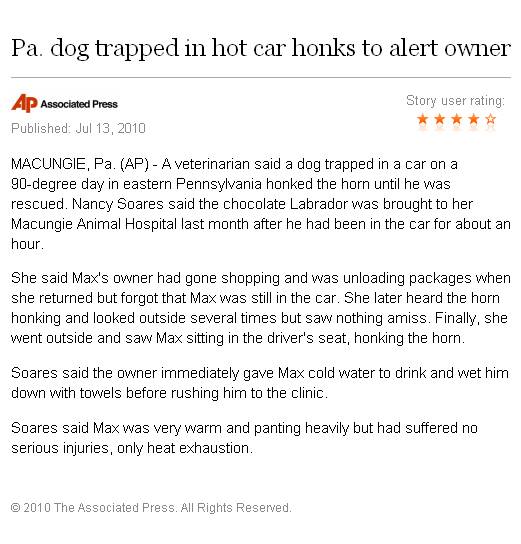 We took all of our dogs to the vet yesterday, we took 2 in and then swapped the other 2 when they were done. The vet asked me where are the other 2? He said I hope they are not in the car with all the windows rolled up!? They were in the car but the car was running and the air conditioning was on. Something I would like to bring to peoples attention is if you have a remote starter, please remember that they shut off automatically after a specified amount of time, ours is 20 minutes. On the rare occasion we have had to leave our dogs we start the car with the remote and set our phone alarm for 15 minutes and go out and shut it off and restart it again, it is very easy to loose tract of time when you are busy.
NOTE: The way ours works you have to shut it off if it is still running and then restart it again which is all done with the remote. You can’t just hit the start again and it resets it’s self, it doesn’t work this way. Also please check to make sure it actually started, sometimes things fail.
Some remote starters are stronger than others and can work from farther away, and when you are in a building it takes even more strength for it to work.
If at all possible avoid leaving an animal in a closed up vehicle.

An ounce of prevention is worth a pound of cure!

I DO NOT PROMOTE LEAVING AN ANIMAL IN A VEHICLE!!!!

Good dog! but yeah WHY was he left in there in the first place?

A few weeks ago me and Becky trained and we ran the AC full blast for the dog(s) in the van. I don’t think it was even as hot as it is now but I didn’t want anyone stealing stuff or pestering the dogs while we were laying tracks. My remote lock apparently doesn’t work when my car is already on, but I had both keys so we just had to use a key to open the front door each time.

Oh and I also locked Schumi and Nikon in the van with the keys in the van (as I seem to do once a year). We called the tow company and they were out and had it open within 10 minutes.

One last thing, I read NOT to give dogs cold water b/c it can cramp their abdomen and make them throw up or bloat. If they are too hot just give them normal temp water (but not too much at once) and keep their paws and bellies wet.

That’s what we have to do with the van, use the other key to get in. If you reach in from your side door and push the front lock button and close the side door they will all be locked. We have 2 dogs we don’t crate but they will lock you out in a New York minute…been there done that, but we couldn’t get them to step back on it to unlock it for the life of us, expensive lesson learned, and thank God it wasn’t hot out.
Great info on the water, FYI same goes for people who are over taken by the heat, you can put a person into shock if you use ice cold things.

Thank you for adding that tip about cold water and too much water to a dog that is hot or has exercised in hot weather.

K9 folks typically have a Hot Dog unit (http://www.criminalisticsinc.com/products/hotdog_portable/hotdog_portable.htm) or other type (http://www.rayallen.com/product/f_series_k-9_deployment_and_heat_alert_systems/K-9_Transport) of remote heat alert systems installed in their vehicles. But even those can fail. :/ And they are certainly pricey.

I think it is harder on the dogs to go from cool to hot and then expected to work. I prefer them to acclimate to the outdoor temp. In crates in the van I leave the doors and windows open and have battery powered fans on each cage. I also have a solar panel that can run a fan. I also use shade cloth to block the sun.

Do you have any good sources for the fans?

They are called O2 and you buy them at Wal Mart.