HI Julie,
The Vet did say he was the most handsome GSD EVER! and she also said he is going to be a huge monster, which we already know. Well he is doing really good and since he has finished all of his medicine he has been much more lively. He plays fetch, plays tug, sits and listens very well. 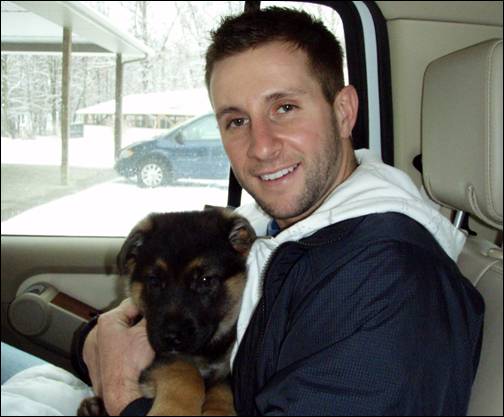 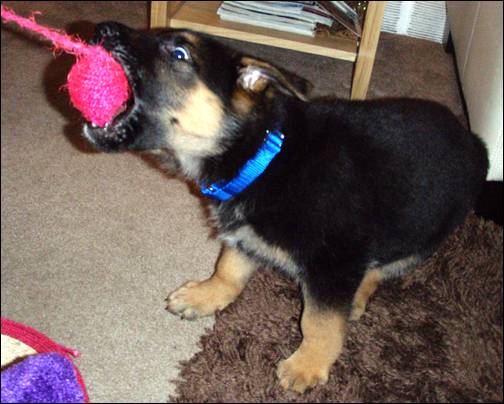 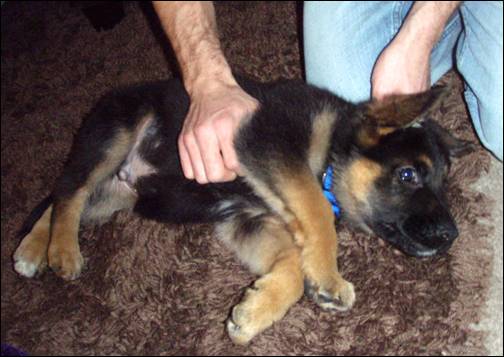 Well Julie the name Dom just didn’t fit so I ended up naming him Brody. It just came up out of nowhere and it just seems perfect. I have attached a few pictures that i have taken of him. I found my dads old Minolta 35mm camera. I’m trying to learn how to use it. The first roll i took didn’t come out very well but i think it had something to do with the film being 6 years old. Well i bought some HD film and hopefully I get some really nice pictures of him. I only lens I have for it is a 28mm wide angle lens so it works good for close angle shots. Any advise on the camera settings i should be using. Such when i should use the 1000 setting vs the 500 and 250.

Well thanks a lot Julie for creating such a wonderful Puppy! We love him so much

Brody is adorable! More pictures please!!!! Hope you are having tons of fun with him! Schumi is 9 months and was 76 pounds last week, if that gives you something to go by. 😉

Yes, I agree with Becky. Brody is adorable. Enjoy your “little” pup. Happy 9 months to Schumi and Annie. Rudi was just over 72 pounds last weigh-in. Brody won’t be little for long…and you will probably need a bumper sticker that reads, “My GSD is smarter than your college student”. Julie H 🙂

Orange collar boy was my favorite from the puppy pix, so I will be watching for his progress. I wouldn’t worry too much about his size. My Chief was the biggest of his all male litter, everybody was saying he would be huge, like 100 lbs, etc., freaking me out. He is going on two years now and ranges between 80 to 85 lbs (just right in my opinion). Not a huge monster, and not the biggest of the brothers. I have learned you can’t go by puppy size to determine adult size. Still, enjoy Brody while you can still pick him up – he will grow up in the blink of an eye…..

You said this perfectly!!! Thank you. I tell this to people all the time and they never believe me.

Hi Nick,
Brody has a gorgeous head—he is going to be a real looker! I think you picked the perfect name for him. Do yourself a favor and buy a digital camera. With such a handsome pup, you will be tired of buying film in no time! 🙂

Always use the fastest shutter speed that you can for the light situation. What you posted looks great.

And what a handsome puppy!