Member of the Tribe

Not a GSD, but clearly an honorary member of the tribe 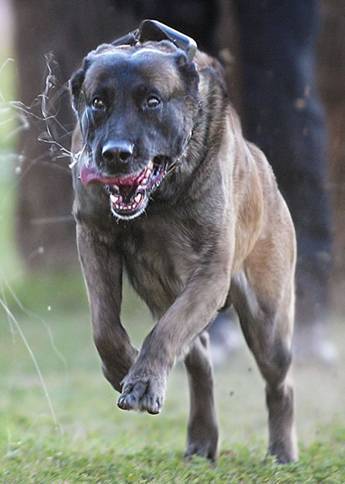 The K9 above is Brutus, a military K9 at McChord. He’s huge – part Boxer and part British Bull Mastiff and tops the scales at 200 lbs. His handler took the picture. Brutus is running toward me because he knows I have some Milk Bone treats, so he’s slobbering away! I had to duck around a tree just before he got to me in case he couldn’t stop, but he did. Brutus won the Congressional Medal of Honor last year from his tour in Iraq. His handler and four other soldiers were taken hostage by insurgents. Brutus and his handler communicate by sign language and he gave Brutus the signal that meant “go away but come back and find me”. The Iraqis paid no attention to Brutus. He came back later and quietly tore the throat out of one guard at one door and another guard at another door. He then jumped against one of the doors repeatedly (the guys were being held in an old warehouse) until it opened. He went in and untied his handler and they all escaped. He’s the first K9 to receive this honor. If he knows you’re ok, he’s a big old lug and wants to sit in your lap. Enjoys the company of cats.

Isn’t he too cool!! Thanks for sharing Brutis with us!

Wendy and the gang